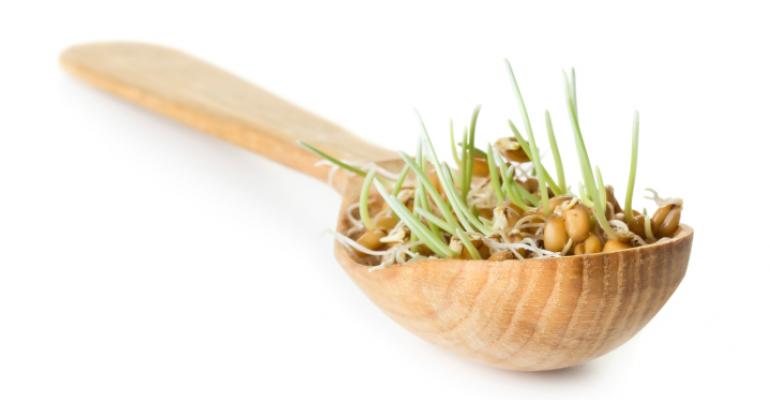 U.S. sales of sprouted grain products are expected break $250 million by 2018, and recent product launches and expansions confirm that this trend is popping up elsewhere in the world, too.

For years now, sprouted foods have been a winning trend for anyone who likes to bet on slow but steady growth. But the trend has picked up the pace a bit in the last few months, with sign after sign that it's going to continue upward.

Longtime sprouted bread company Food For Life will launch sprouted waffles in February. Costco just started carrying Angelic Bakehouse's sprouted seven-grain bread in more than a dozen locations, with plans to add more soon. And about a month ago, Massachusetts-based Bay State Milling Co. announced an expansion of its BeneGrain line of sprouted foods. The line, which had featured sprouted wheat and brown rice, now includes sprouted amaranth, millet, quinoa, chia and brown flax—all available in whole and milled forms, as well as both conventional and organic.

These ancient grains are expected to be used in snacks as well as breads, and to be potentially more popular with millennial customers, who “tend to value the authenticity of foods from specific global origins with unique tastes and textures,” said Colleen Zammer, Bay State Milling's director of product marketing.

“We believe we are just at the beginning of the growth curve for sprouted ingredients,” she said. “We firmly believe that sprouted grains and seeds and the products created from them will constitute the next generation of grain-based foods, derived from a class of better-for-you carbohydrates.”

Sales of products featuring sprouted grains are growing fastest in the U.S.—where they're on track to break $250 million by 2018—but the market is expanding overseas, too. Alabama-based To Your Health Sprouted Flour Co. is starting to sell its products in a number of different countries thanks in large part to its participation in export promotion activities the OTA has been undertaking in recent years.

The company now employs at least 30 people, up from two part-timers less than a decade ago. It plans to reach 45 employees in the coming months and is building a new 26,000-square-foot facility that will enable production capacity to expand five-fold. To Your Health has begun selling to the UK, South Korea, Mexico and Japan, and continues to get inquiries from other countries around the world.