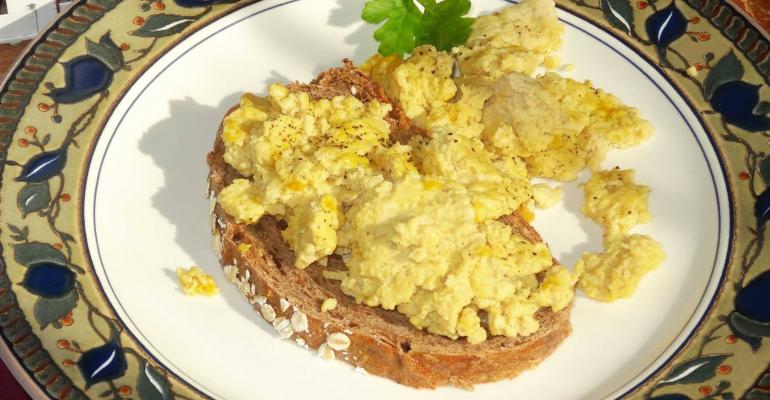 The market may still be small, but eggs are showing promise as the next category for plant-based alternatives to traditional animal-derived foods.

From Ener-G Egg Replacer to flax meal, there's no shortage of products and ingredients that can substitute for eggs in recipes, often to act as a binding agent and nothing else. But on their own, there's nothing egg-like about these foods—so people seeking an eggy breakfast without the eggs usually turn to scrambled tofu, which is hit-or-miss, depending on who made it and what seasonings went into the pan.

But six months ago, Pennsylvania-based The Vegg gave this crowd a new option: The Vegg Scramble, a soy protein- and nutritional yeast-based mix that, when mixed with soymilk, can be whipped into an egg-like breakfast. And Hampton Creek may not be far behind. The company, which has been making headlines lately because of attacks from the Egg Board for the labels on its egg-free Just Mayo product, has a similar product in the works.

Though Hampton Creek wouldn't provide a timeline for any product launches, Founder and CEO Josh Tetrick wrote in an email, “As always when we make our products, if it's not better tasting, less expensive and better for the planet, then we won't release it. Our biggest goal with these products is have a major positive impact.”

In the meantime, Rocky Shepheard, owner and founder of The Vegg, said customers have been happy with the scramble. He's filled a niche for vegans and other egg-avoiding consumers, and he's nearly sold out of his first production run (with buyers in 22 countries) of The Vegg Scramble. It hasn't caught up yet with his top-selling product, Vegan Egg Yolk, but he thinks that could change as word spreads.

He also thinks that when Hampton Creek does release its non-egg scramble, it won't be competition so much as a rising tide for all boats. “I think that when they come out with a product, it will increase my sales, just from the aspect of people knowing about scramble,” he said.

There don't seem to be any other similar products out there yet, although a chicken-free egg white is in the works at Clara Foods, using yeast culture in a laboratory. Shepheard, for his part, wants to see that egg white, when finished, paired with his vegan egg yolk. “I think that would give you your best scrambled egg ever,” he said. Follow Your Heart also has a vegan egg product in the works.

The market may still be small, but eggs are showing promise as the next category for what has been a growing trend for years: plant-based alternatives to some of the most traditional, and typically animal-derived, foods in the American diet.

"The market for a better breakfast product is massive, and these products will solve a lot of sustainability issues, food safety concerns, and allergy problems," said Carey.