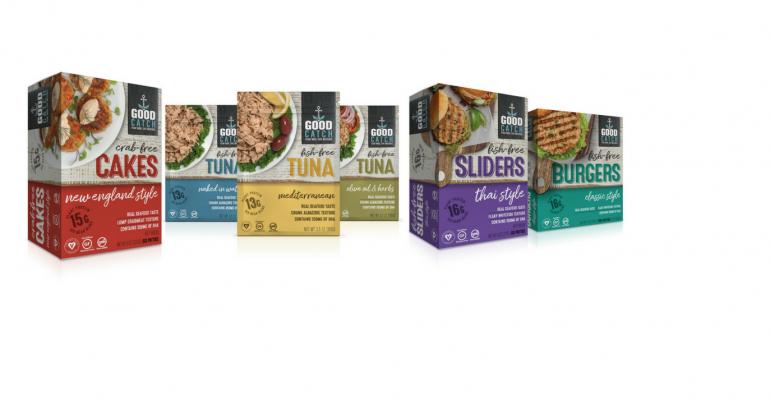 Led by Stray Dog Capital and Rocana Ventures and including several prominent impact investors such as Almanac Investments, CPT Capital and New Crop Capital, the net proceeds from the investment, totaling over $32 million, will be used for significant expansion in distribution across North America, Europe and into Asia, the opening of its state-of-the-art manufacturing facility and new product and food service channel launches in early 2020.

Valued at $4.5 billion, the U.S. plant-based foods retail market grew five times faster than the total U.S. retail food sales over the past year. "Consumer demand of trailblazing plant-based alternatives is nearly insatiable, and this trend is led by taste and availability. This next phase for Good Catch is laser focused on meeting consumer desires with culinary applications across all channels," said Chris Kerr, CEO and Co-Founder of Gathered Foods. "This round of investment emphasizes the food industry's recognition of our strategy, our reception by consumers, and anticipation for more innovation to come."

"When we met the Good Catch team, we were immediately captivated with their mission to develop more sustainable plant-based seafood products that taste as delicious as traditional seafood," said John Haugen, Managing Director of 301 INC. "Good Catch stands out as a strong, expandable brand with passionate leadership, and we're excited to partner to grow."

Behind the success of Good Catch are founding chef partners and brothers, Chad and Derek Sarno. They have worked tirelessly to help create the company's proprietary six-legume blend (peas, chickpeas, lentils, soy, fava beans and navy beans), utilized as the base of these inaugural Good Catch products. The added superior umami flavor from seaweed and algae extracts creates that real seafood flavor. All Good Catch products are free of dairy, GMOs, mercury, toxins, microplastics, microfibers and are safe and enjoyable for those with shellfish allergies. These products exhibit the same texture, flavor, and nutritional value as conventional seafood, without harming the environment.

"Good Catch is pioneering a new, promising sector of the fast-growing plant-based protein category and we're thrilled to support their continued growth and progress as they deliver consumers great-tasting plant-based seafood products that support their brand mission—and ours, as well," said Dan Curtin, President and CEO of Greenleaf Foods, SPC.

According to the United Nations, nearly 90% of the world's marine fish stocks are now fully exploited, overexploited or depleted, with fisheries subsidies playing an integral part. Keeping startling statistics such as this in mind, Good Catch believes that the only truly sustainable seafood is one that allows fish to remain in the ocean, undisturbed. Seafood is consumed globally and found within myriad culinary applications. From an environmental standpoint, Good Catch is hopeful that by creating delicious seafood alternatives, they'll be able to make a real environmental impact.

"On the heels of widespread adoption of plant-based meat and increasing consumer concern about the environmental impacts of food production, the market is ripe for Good Catch's next-generation plant-based seafood," said Caroline Bushnell from the Good Food Institute, "Plant-based seafood provides a host of environmental benefits, including alleviating pressures on rapidly depleting fisheries, providing relief to fragile ocean ecosystems, reducing the impact of fishing nets on the ocean plastic problem, and reducing production-related GHG emissions."

As the appetite for plant-based seafood continues to grow, the goal is to make Good Catch accessible and available for everyone. Good Catch products are now available in over 4,500 retail outlets across the United States, and will be launching in the UK in the coming weeks.