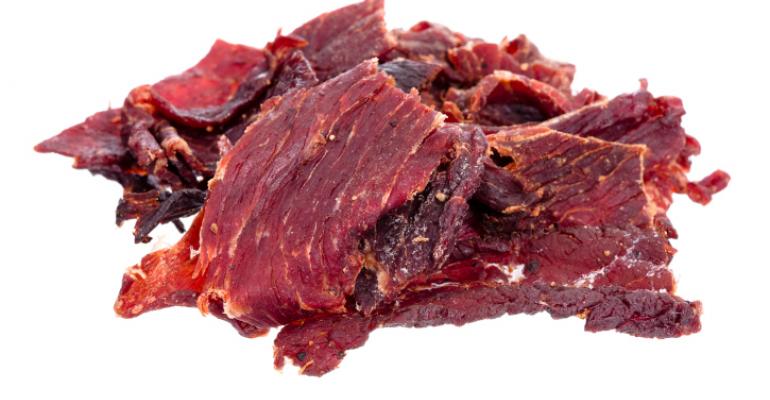 We Americans love our meat—so much so that beef and poultry production in the U.S. topped 92 billion pounds in 2011. So popular is the category that recent food introductions include salmon jerky, steak-flavored potato chips, venison truffles, and, of course, bacon-laced everything. A recent elaborate (and hilarious) internet hoax advertising fictional "meat water" further plays on the trend.

But creating packaged goods that contain meat is fraught with regulatory concerns, supply chain issues and other difficulties. Here are six things you to consider before you launch your meat product:

Meat products are primarily regulated by the United States Department of Agriculture (USDA)—specifically, by the Food Safety Inspection Service (FSIS), the public health agency within the USDA that's charged with ensuring that meat products are safely and correctly produced, labeled and packaged.

But it's not quite that simple: Areas of overlapping jurisdiction mean you'll need to be sure you’re complying with the correct set of laws and regulatory agencies. For example, the U.S. Food and Drug Administration (FDA) is responsible for "non-specified" red meats, including deer, rabbits and game animals, as well as "non-specified birds" like wild turkeys, wild ducks and wild geese. FDA also has jurisdiction over products that contain 3 percent or less raw meat, 2 percent or less cooked meat, or less than 30 percent fat, tallow or meat extract.

Other exemptions apply as well. For a complete definition of jurisdiction, see Exhibit 3-1 of FDA's "Investigations Operations Manual 2013."

Whatever the case, expect to leap through some hoops and shell out some extra dough. “Any package regulated by USDA requires prior approval, as opposed to non-USDA items which are not subject to such a process,” says Jack Acree, executive vice president of Saffron Road foods. “As a small company, we move fast, so this process sometimes slows us down. There is also a USDA inspector during all cooking, which is not a bad thing—except that it adds cost.”

You’ll find a list of regulations, standards and guidelines for most meat and poultry products on the USDA's FAQ page. You can also get answers to specific questions regarding your product from federal, state and local USDA food safety representatives. County service centers and extension offices tend to be most helpful and accessible. Meat packaging and processing laws also vary by state; check with your state’s Department of Agriculture or local Health Department for specific guidelines.

The recent meat adulteration issues in Europe—when foods were found to contain horse meat and other undeclared meats—left both consumers and meat producers reeling. While horse meat itself isn’t dangerous, using it in food products carries the potential for introducing potentially harmful veterinary drugs into the food supply chain. The horse meat scandal highlighted ongoing concerns about supply chain issues and breakdowns in traceability in the meat industry. And while the scandal appears to have been confined to Europe, it raises questions about the safety of the global food supply chain.

Meanwhile, a recent USDA decision to allow poultry slaughtered in the U.S. and Canada to be processed in China and returned to the U.S. further confounds traceability. Because the poultry originates in the U.S., and because it will be processed, it will not require country of origin labeling.

But the ability to follow meat from its origins and through various supply chains is critical, not only from an integrity standpoint, but also from a food safety standpoint. In a foodborne illness outbreak, it’s important to be able to quickly trace the source of the pathogen. And as evidenced by the EU horse meat scandal, traceability of meat is about more than foodborne illness—it’s about potential adulteration of products.

As consumers become ever more sensitive to issues like hormones, antibiotics and animal welfare issues, how important is the organic label? “It’s nice to have, but it’s certainly not a deal breaker,” says Rebecca Kousisis, spokesperson for Wellshire Farms. “Though some people are concerned with this for ethical reasons, many cannot afford the cost of organic products and are more concerned with claims that have more of an added health benefit.”

Another option is the Process Verified certification. Under this voluntary program, companies can pay an additional charge for USDA inspectors to verify that they’re following certain protocols, such as refraining from antibiotic use or added hormones, or raising chickens cage-free. Once verified, the product can then use the USDA Process Verified logo on packaging, accompanied by marketing claims associated with their process, such as “raised cage-free” or “vegetarian diet.”

Humane certifications also come highly recommended. “We focus on how the animal was treated and what it was fed while it was alive,” says Saffron Road's Acree. “We use livestock that is either Certified Humane by Humane Farm Animal Care, or The Global Animal Partnership. We also find that using halal-certified protein gives us access to the 8 million Muslims in America and others that look at such religious certifications like halal or kosher as another step in making sure that their food is clean and safe, and usually comes from smaller family farms.”

Since 1906, meat processing plants have been required to establish food safety and sanitation controls which are verified by the USDA. In spite of the regulations, however, tainted meat scares continue. Most recently, more than 58,000 pounds of beef from Central Valley Meat Company—a large, mainstream producer—were recalled in late September, after bits of plastic were found in the meat.

In 1998, USDA implemented the HACCP (Hazard Analysis & Critical Control Points), a national system intended to manage processing plants and minimize the risk of foodborne pathogens. In the system, individual processors identify critical points in their operations where health hazards might occur, then implement steps to monitor and contain risks. One control, for example, is to stop the production line periodically and thoroughly clean equipment. Other critical points may occur in the production line, when cooking products like hot dogs or meatballs, for example, or for freezing procedures.

How to get started? You’ll find general guidelines on FDA's website, or at the International HACCP Alliance site.

Sodium nitrate has been used for years in cured meats to retain color and prevent spoilage. But in 1978, when MIT researcher Paul Newberne documented the carcinogenic effects of nitrates and nitrites, the issue of nitrates in meat became as hotly debated a topic as humane animal treatment. Subsequent studies have also linked sodium nitrite and sodium nitrate to increased gastric and colorectal cancer.

Many natural meat producers use alternatives to nitrates, usually celery juice or powdered celery extract, which is abundant in naturally occurring nitrates. But they’re still nitrates. In a recent issue of Cook’s Illustrated, researchers tested regular versus natural, “nitrate-free” bacon, and found that the “nitrate-free” versions actually had more nitrites than the convention products.

In a response to the article, Applegate Farms notes that cured meat products are not the primary source of nitrites in the diet, and that the vast majority come from vegetables like spinach, beets and lettuce. Additionally, says the company, many research and health panels have upheld the safety of nitrites, also demonstrating that it’s naturally produced in the body.

What’s the answer? In short, be aware of the controversy, avoid chemical nitrites and, if you choose to add celery powder as an alternative, be prepared to defend your decision in your marketing materials.

Most conventional meat products have extremely high sodium content, and there’s a reason for it: Salt adds flavor, helps retain tenderness, and extends shelf life by inhibiting microbial growth. The average hot dog can contain as much as 500 mg of salt, more than a quarter of the daily recommendation. As concerns about the dangers of excess sodium grow, it makes sense to reduce salt. (Don't let food safety concern you here—several studies have found that cutting salt content has no effect on the growth of E. Coli, Listeria or Staphylococcus aureus bacteria.)

Many or most processed meats (meatballs, hot dogs, frozen meals) also contain wheat or other glutenous grains, to help retain moisture and stabilize the product. In formulating, gluten-free flours, starches or gums like xanthan gum act as binders and can be used to replace wheat or other gluten-containing grains. Other alternatives include pea protein, rice, potato starch, quinoa flour or buckwheat. (Be sensitive, however, to the Paleo market segment. The diet prohibits grains and legumes, so take that into account during formulating.)

And cut back on sugar—often used as a preservative and humectant, an agent that helps retain moisture—or, at least, use more natural alternatives.

Why you need regulatory consultants
Aug 27, 2013