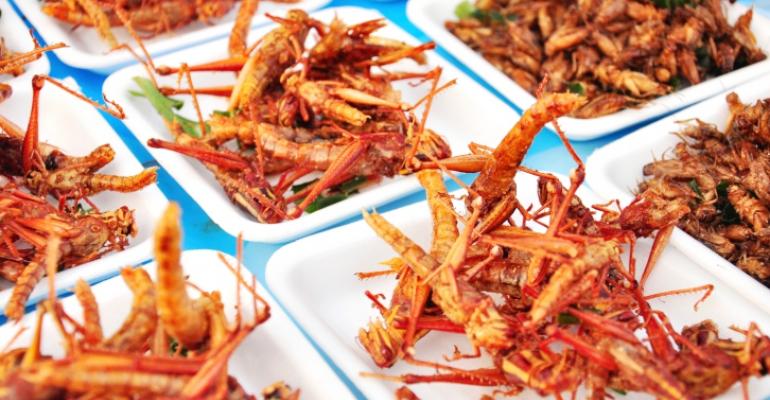 Cricket Kiev? Bug Mac? Western society still has a ways to go to get from &quot;Eww &hellip; bugs!&quot; to &quot;Mmm ... bugs!&quot; but the dictates of a changing climate and a rising global population may help to speed up that conversion. Thinking of joining your brand to the insect protein revolution? Hear from the pioneering few who are making this market a reality.

At some of the finest restaurants in Europe and the United States, you’ll find bugs in the kitchen. And on the menu. Funky-chic venues and Michelin-starred restaurants like Aphrodite in Nice, France, and Specktakel in Haarlem, Netherlands, offer such specialties as creamy corn with crickets, baby bee brûlée, fried water beetles and grasshopper tacos. So popular is the practice of munching bugs that industrial designers and appliance manufacturers are creating sustainable systems that will allow consumers to breed and harvest their own insects for protein.

But in most parts of the world, entomophagy—the practice of eating insects—is a matter of routine, not an occasional thrill at a fancy restaurant. In fact, hundreds of species of insects—everything from raw butterflies to deep-fried tarantulas—are already part of the daily fare for two million people around the globe.

“Insects have long been a staple component of the diet for two-thirds of the world’s population,” says Morgaine Gaye, director of Bellwether Food Trends in London. “This isn't a new idea, just something which has taken a bit longer to gain momentum. Because we have been able to afford rich protein sources—like meat—and also because of the social meanings attached to insects, Western society has not embraced entomophagy. But I think it's only a matter of a few years before insects are part of our daily diet.”

From an environmental point of view, eating bugs makes sense. Conventional meat production uses enormous amounts of water, and is one of the major causes of land degradation, air and water pollution, and loss of biodiversity. Livestock grazing accounts for about 26 percent of the Earth’s land surface, and feed crop production uses about a third of all land suitable for growing. In fact, nearly 70 percent of previously forested land in the Amazon is used as pasture, while feed crops account for most of the reminder.

By contrast, raising insects has minimal impact on the environment. In one study, Dennis Oonincx, a graduate student at Wageningen University, calculated the environmental impact of raising mealworms for meat. The study found that mealworms produced far less greenhouse gas and used a fraction of the water and land required for raising chickens, pigs and cows.

“Our belief in insect protein comes from the amazing efficiency of insects, specifically crickets, and their low impact on water resources,” says John Beers of Chapul Cricket Bars. “According to data from Water Footprint Network, 100 gallons of fresh water will create 238 grams of cricket protein, compared with 6 grams of beef protein or 18 grams of chicken protein.” Bugs beat even soy in their efficiency, producing nearly four times as much protein per gallon of water used.

“In addition to this water efficiency, insects need very small spaces to ranch, compared to cattle and pork, and with their short life cycles it is possible to ensure continuous production,” Beers says. In Oonincx’s study, mealworm farms use one-tenth of the amount of land required to raise beef, including the land used to grow feed crops.

As for nutrition, insects have a high level of protein, vitamins, and minerals, says Clay Ghann, CEO of Ghann's Cricket Farm in August, Georgia. Locusts and grasshoppers stack up to raw beef in terms of protein, and also contain calcium, zinc and iron. Caterpillars and spiders are especially rich in protein—per 100 grams, caterpillars provide 28 grams of protein while spiders contain a whopping 63 grams, according to Iowa State University's Department of Entomology.

From brood to shelf

“We work with a domestic cricket ranch and have developed a unique process for the breeding and shipment of our bugs,” says Beers. “Once we receive the crickets we have a state- and federally-approved process for sanitizing, baking and milling. Then we arrive at our final product—cricket flour—which is the ingredient that is added to our energy bars.”

The U.S. Food and Drug Administration (FDA) has long regulated the amount of insect protein allowed in foods for human consumption. For example, 60 insect fragments are allowed per 100 grams of chocolate (so most people have already eaten bugs). But the intentional addition of insects to packaged foods is another matter entirely. It’s a gray regulatory area, but not impossible to navigate.

“Since we began in 2012, we've worked hand-in-hand with the FDA and state health regulatory agencies,” says Beers. “From these relationships, we've created a process and an ingredient that has not hit any hurdles moving to the marketplace. We now have stores carrying our bars in 15 states and have shipped across the world.”

Working out the bugs

If you’re considering adding beetles to your brownies or mealworms to your meatballs, there are some special considerations from a formulating point of view. Because insects are largely tasteless and odorless, you won’t have to contend with flavor and aroma considerations. But, unless you’re marketing a novelty product like chocolate-covered ants, formulating with a finely ground insect flour is the safest way to go.

“We've found that presenting the crickets as an unseen (no legs or antennae) ingredient in an everyday food product—an energy bar—was the easiest way for most folks to digest the idea of trying insects for the first time,” Beers says. “By having our crickets milled down to a flour, we can substitute insect protein in many recipes without having the ‘ick’ factor of a whole, crunchy bug.”

From a marketing and positioning point of view, adding six-legged critters to your food product also presents some unique challenges. One is the vegan question. You’d think vegans would reject insect protein out of hand, but that’s not necessarily the case: the vegan market is surprisingly divided.

According to Vegan Action, a non-profit organization that administers the Certified Vegan Logo, “Many vegans are not opposed to using insect products, because they do not believe insects are conscious of pain.” Other vegans believe that, for people who are already eating meat, insects are a more human and environmentally preferable choice than cows, chickens or pigs.

But some vegans say insect protein isn’t an appropriate vegan choice. As Michael Schwarz, founder and CEO of Treeline Treenut Cheese says, “If bugs end up being consumed in the west, we will certainly end up with hideous bug factories, just as we have hideous egg, milk, chicken, cow, pig and fish factories to satisfy human greed for unhealthy foods.”

Another downside to using insect protein are the significant psychological barriers—or what Beers calls the “ick” factor. Even though other populations may consider insects standard fare, we Westerners are accustomed to either fleeing, squashing or spraying bugs, not eating them. If you choose to use insects in your product, the best advice is to be up front about it.

“We never hide the fact that Chapul contains crickets,” Beers says. “In fact ‘chapel’ is the word for grasshopper in Nahuatl, the language of the Aztecs. The trick is in using flour. This really eases the transition for folks who aren't ready or willing to eat an entire, intact insect.”

Capitalize on the fact that you’re on the crest of the next big thing, and emphasize the nutritional and environmental advantages. Accept that you’ll lose some customers, but also know that the market is wide open for products in a trend that’s not likely to go away.

“While I admit that it's going to be a hard sell in the western world, I do believe the idea of eating insects for protein is gathering steam,” Ghann says. “In another 50 years or so, entomophagy will be much more commonplace in the United States than it is now.”

So maybe a Bug Mac isn’t such a far-fetched idea after all.