Why Quinn Popcorn refused to give up on transforming their category 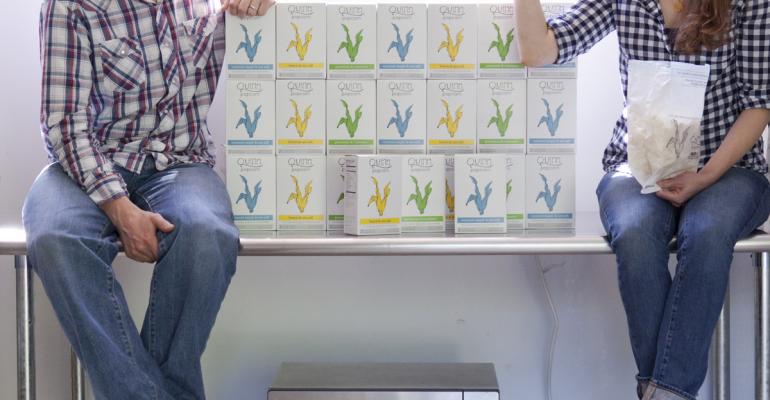 Quinn Popcorn founders Kristy and Coulter Lewis found themselves in a conundrum that many natural products entrepreneurs face: You&rsquo;ve got a groundbreaking idea that will transform a tired consumer products category, but there&rsquo;s no supply chain to make it a reality. Here&rsquo;s how the Lewises resolved that problem.

What happens when you realize that potential toxins and GMOs lurk in your favorite convenience snack? If you’re Kristy and Coulter Lewis, founders of Quinn Popcorn, you set your mind on reinventing that snack—and hang on for the roller-coaster ride of your life.

Two years ago, just after the birth of their son, Quinn, Kristy—with no food industry background—decided to start a revolution in microwave popcorn. The ubiquitous snack had recently been in the news because of concerns about additives and GM corn.

What first inspired you to start Quinn Popcorn?

Coulter: Kristy simply wanted this product to exist. Microwave popcorn is nostalgic for us because we grew up with it, but then we had to quit it cold turkey because we just didn’t like what was in it. Kristy actually came to me five years before we did it, saying, “Someone needs to do this, this product is so disgusting, someone’s gonna come fix it.” And it just didn’t happen! We were amazed, because there was so much changing in the food industry and this one vestige of nasty processed food was left untouched.

Kristy: Most people love microwave popcorn, and kids love it; it’s such a family-friendly snack. We just couldn’t believe it still existed in the form that it did. So I was driven by the mission of making a healthier and better snack for families to enjoy with each other.

What were some early obstacles and how did you overcome them?

Coulter: Not only did a lot of the ingredients we wanted barely exist, but also the entire industry is geared toward scale. When you’re small, the only way people work with you is if they believe in you. The challenge for us was to get people to see what we saw and get them on board so we could actually make the product.

Kristy: I wanted to source local, organic herbs and spices, and I quickly learned that’s almost impossible without any industry contacts if you want to launch a regional or even a national brand. The same was true for corn and cheese and all of our ingredients—finding suppliers willing to work with us but who could also scale with us. I was on the phone all day, and it was really just a wild goose chase: If I was calling about herbs, I’d ask, “Do you by any chance know anyone who grows organic, non-GMO corn?” Then I’d call a farmer and they say, “You should contact these people.” It took months of digging into it and we were so particular about it, but we’re so happy with the people we’re working with now.

Coulter: It’s almost impossible to communicate how touch and go it was for a while. I’m always fascinated by entrepreneur stories and that one thing that happened that got them through—we have a hundred of those. They were all linchpins. We were moving forward and we knew we didn’t have a corn supplier and just hoped that someone out there would be a good fit; same with the bag and all these other pieces that fell in place over time. If we hadn’t found that one person, we probably wouldn’t be here. The vision and making this a reality was very vulnerable for a very long time.

What were your biggest breakthroughs? 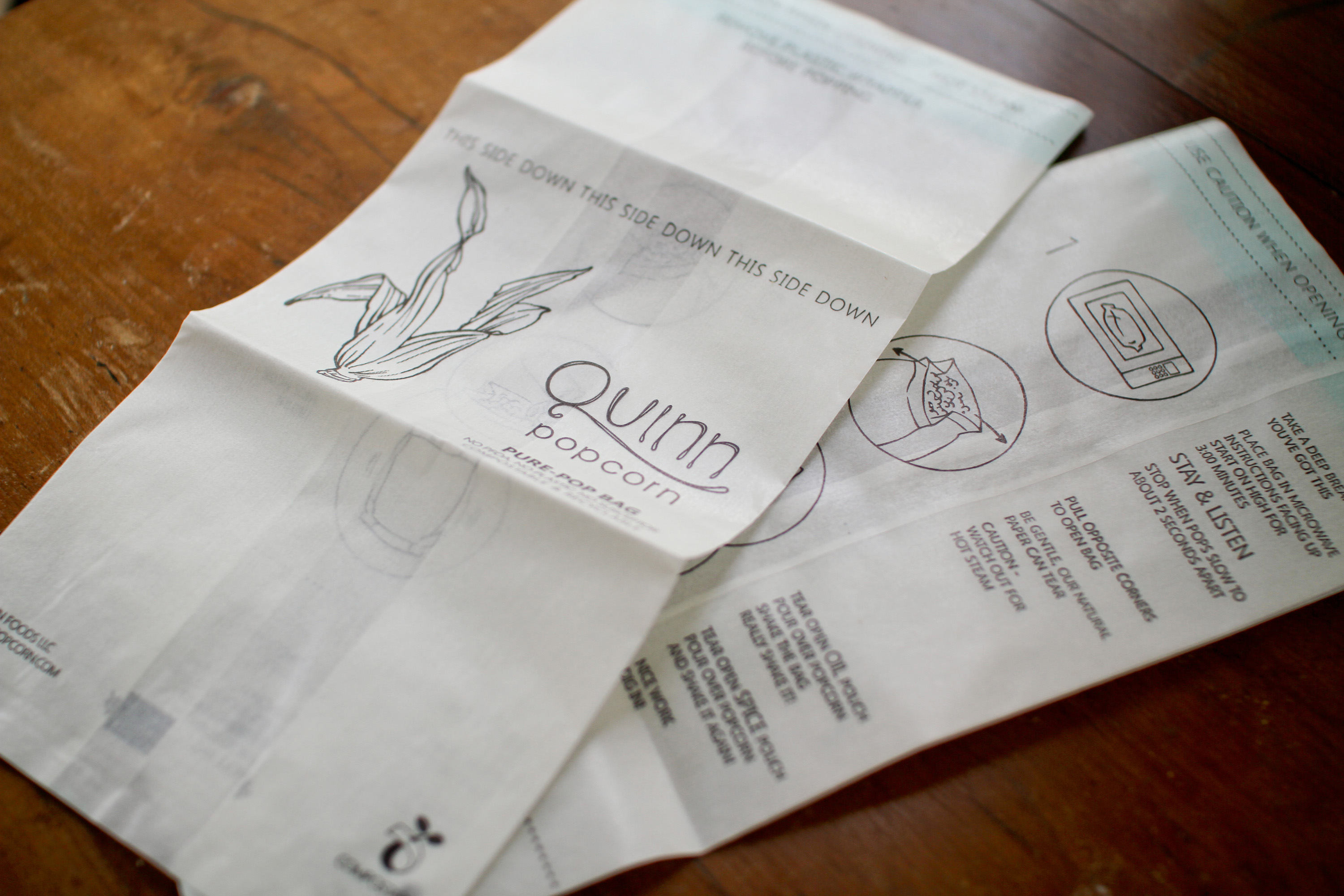 Kristy: Our corn, number one, and our paper supplier were huge breakthroughs.

Coulter: We wanted to develop our own bag that didn’t have any coatings at all but the paper also had to stand up to the oil. After a lot of experiments and trial and error, we found a supplier that could certify that their paper was compostable and chemical free and would work with us, so that was a big win.

Kristy: A lot of people would laugh at me: “You’re trying to take the susceptor out? You’re trying to do this or that?” and I’m like, “Yes, we are. Do you see this vision or not?” And one bag manufacturer did. It’s really just trying to make people believe what you are trying to do. You’re selling the dream to them, or trying to.

How did you communicate that dream?

Kristy: A lot of people love microwave popcorn and so they understood what we were trying to do, and I think that really helped. It wasn’t like I was trying to create something they’d never heard of. Once we had test kits, I would send my vendors samples so they would get excited about it and try it.

Coulter: We were lucky too that it’s an overdue product; when we told the overall concept, people would say, “Oh yeah, that makes sense. That doesn’t exist yet?”

What's kept you going after running into so many obstacles?

Kristy: I always believed this would work, regardless if I was crying or had a crappy day. You have to believe it will work because if you have one doubt, you don’t push nearly as hard. We have huge control over the supply chain, which is one of the reasons why we started this. We wanted to understand how our food was being produced, and you can’t understand that unless you do it yourself.

Coulter: We have huge wins and huge setbacks regularly, and that’s just part of it.

Kristy: For instance, right now we’re switching our bar codes around. At first being so new to the industry we bought old bar codes: $75 a pop. Unfortunately, we quickly realized that that wasn’t the universal bar code and it wasn’t actually attached to our business. So we made the decision that we should probably switch our bar codes now rather than wait until we were growing really quickly. So we did, and that’s been a huge nightmare—all of the old bar codes are in all of the UNFI warehouses, Whole Foods is carrying old bar codes. It’s going to cost a lot of money, and it’s been really challenging and stressful, but there have been positives that have come out of it. We’ve been on really good terms with the buyers at UNFI, we’ve created relationships, and we’ve tried to have people help us through this.

What advice would you give that you wish someone had told you in the beginning?

Coulter: We did know this and do this, but it would be: Connect to as many other food companies as you possibly can. We have ten brands that we talk to every single week. We’ll say, “What does this line in this contract mean? Is this a good deal to do here?” You can’t Google this stuff—it doesn’t exist anywhere. These connections are the only reason we’re still around.

How did you make those connections?

Coulter: Kristy’s amazing. Persistence and calls and emails and making friends—that’s basically it. And the industry is amazing because you’re not really in competition with each other. We all share exactly the same challenges. People are open and willing to share information and it’s all right on target. We talk to tons of companies that are a few steps behind us and give them advice on, well, everything. We need each other because, again, the industry is built around scale—when you’re not operating on an enormous scale, you have a whole set of disadvantages. So this teamwork is essential.

What inspired Arran and Ratana Stephens to start Nature's Path
May 30, 2013

What keeps the nut butter dream alive when Justin questions his commitment
May 31, 2013

How to make your product resonate with consumers
Jun 03, 2013