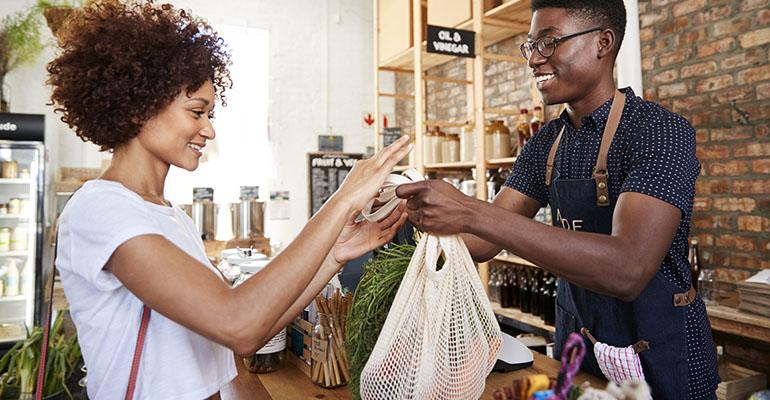 NMI's 2020 Sustainability in America Report delves into how retailers and brands can help sustainable consumers meet their goals.

Which aspects of sustainability matter most to consumers? How can retailers and brands reach ethical shoppers? And how is the iGen generation changing the conversation?

These questions and more are explored in NMI’s 2020 Sustainability in America Report. Here, managing partner Steve French outlines three top-line findings as well as the role retailers can play in helping sustainable shoppers reach their goals.

1. Say no to plastics

Maybe it’s the images of “plastic islands” growing in the oceans, or maybe it’s the fact that plastics are harming wildlife. But one thing is clear: consumer perceptions regarding plastic products are declining, with consumers feeling that plastics in the environment and oceans will destroy life on earth more so than global warming or nuclear war.

When it comes to retail, this means shoppers are preferring food and beverages in cans or glass, and passing on plastic straws. In fact, almost two-thirds say they wish their grocery stores would use less plastic overall.

2. Chemicals are a concern

“Concern over chemicals in the body is shifting to concern about chemicals in the environment, as it is becoming more difficult for consumers to separate their own health from the health of the planet,” French says. In fact, over two-thirds of consumers attribute growing cancer and disease rates to the toxins in soil and groundwater. And 3 out of 5 are concerned about the effects that the products they wash down their drain have on our waterways.

To appeal to this sentiment, retailers can be more diligent when it comes to label monitoring and choose products from brands that commit to eco-friendly processes and eliminate any harmful ingredients.

“Consumers are beginning to recognize that our actions have significant, lasting and often negative effects on the planet’s other species,” French says. “Therefore, they are changing their behaviors to promote a higher level of animal welfare.”

Some are choosing cage-free options, with NMI reporting that the importance of this claim has grown 74% in past eight years; similarly, the importance of grass-fed has grown 47%. 27% of consumers who are reducing their meat consumption say they ae doing so to be more humane towards animals.

With half of consumers interested in learning what companies are doing to treat animals humanely, retailers have an opportunity to tell these stores in the aisle, on social media and via other mediums to appeal to this trend and drive sales.

“Humane animal treatment will become a much weightier issue as consumers are becoming more aware of how animals are being mistreated in meat production and in testing for other products,” French adds. “Make sure, where applicable, to commit to the notion that animals also deserve respect and fair treatment and make sure your message is heard.”