HomeMarket Data and AnalysisFresh or frozen, plant-based proteins are making inroads
Recent
Latest
4 tips to get ahead of chemical concerns in packaging
May 20, 2022
7 CBD favorites in the increasingly popular gummies format
May 20, 2022
Mission MightyMe helps parents introduce allergens to babies
May 20, 2022
UNFI's Eric Dorne to step down as chief operating officer
May 20, 2022
Trending
Whole Foods' honors 30 companies with 10th annual Supplier Awards
May 18, 2022
Getting ready for 2023: Trends for brands to consider
May 17, 2022
Sponsored Content
The rise of sustainable business – eGuide
Sponsored Content
Natural beauty market trends
Jun 16, 2021 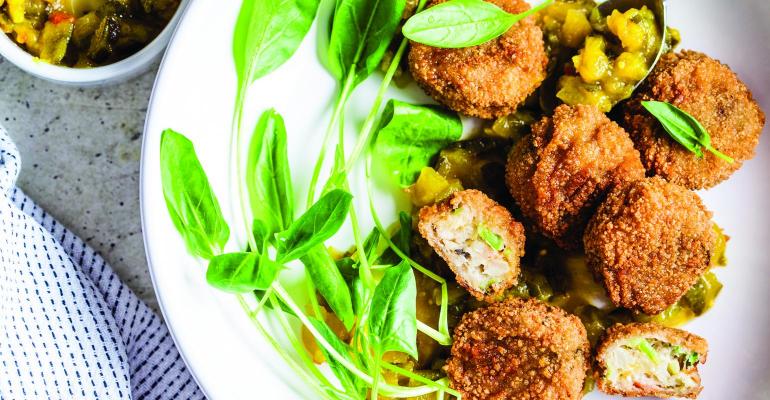 Expanding selections and multi-faceted marketing are enhancing the popularity of plant-based meat alternatives.

Plant-based meat alternatives are popping with potential. Approximately 20% of U.S. consumers purchase plant-based meat at least occasionally and sales account for about 2% of fresh and frozen meat department revenues, reports Information Resources Inc. (IRI), a Chicago-based market research firm. That share will likely increase to 4% to 5% within the next five years, IRI projects.

Sales of fresh and frozen meat alternatives at multioutlet stores totaled $1.4 billion for the 26 weeks ending June 27, 2021, up 14% from the year-earlier period, IRI reports.

Yet, though plant-based meats will become increasingly attractive to shoppers as products evolve to include cleaner ingredients, better tastes and price points that are more in line with regular meat, most retailers will have little concern about meat case cannibalization.

“Retailers don’t want to miss the next big wave,” Chris DuBose, IRI senior vice president of the protein practice, said. “They don’t care about meat versus non-meat. They just want the growth. If plant-based is growing, they will push it if that is what consumers want. They are mercenary that way and it is totally fine because that’s business.” 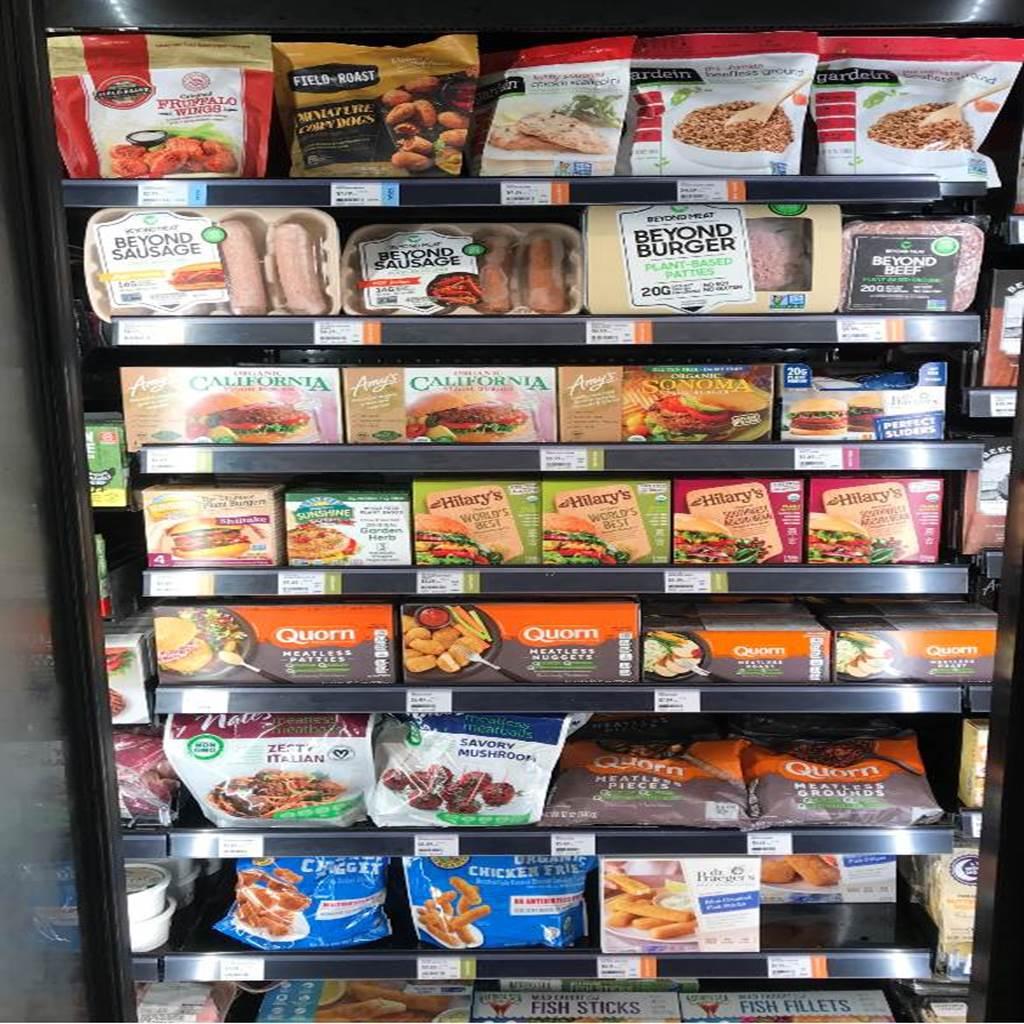 Finding the necessary room within the fresh and frozen cases to merchandise growing varieties of plant-based meats will be a challenge for retailers.

Effective merchandising methods for boosting plant-based meat activity includes the use of loyalty program data to digitally target the shoppers most likely to purchase the products, which includes persons who already are buying from other plant-based categories, DuBose noted.

Retailers also will benefit by situating plant-based meats next to chicken in the fresh meat case, he said. “There is a lot of affinity between buyers of chicken and plant-based,” DuBois said. “The healthy halo over plant-based extends to chicken.”

Finding the necessary room within the fresh and frozen cases to merchandise what is likely to be growing varieties of plant-based meats, however, will be challenging, said Jim Wisner, president of Wisner Marketing, a Gurnee, Illinois-based retail consultancy. “There is a need to find space for another four to eight feet of product that the retailer didn’t have to worry about before,” he noted.

Supermarkets, meanwhile, can better spotlight the category and make it easier for shoppers to locate products by creating plant-based meat sections with ample signage, Wisner said, while also regularly promoting the items. “Retailers need to keep the products in front of customers, so they know you are in the business,” he said. “A promotion cycle induces trial and then you can start building on repurchasing.”

Samplings can further entice shoppers who are reluctant to purchase plant-based meats, Wisner said. “Many people have not tried plant-based meats or bought it once at Burger King and don’t recall it,” he noted. “You have to overcome the preconceptions of what the product is all about and sampling is the fastest and easiest way to do that.”

Among the active marketers is Carlisle, Pennsylvania-based The Giant Co., which offers plant-based products in its 187 stores in Pennsylvania, Maryland, Virginia and West Virginia that operate under the Giant, Martin’s and Giant Heirloom Market banners. Selections include patties, grinds, dinner and breakfast sausage, plant-based “chicken” shreds and strips, plant-based “meatballs,” bratwurst, nuggets and tenders, said Deb Kreider, director of meat and seafood. In addition to plant-based sections within the fresh and frozen cases, some outlets also merchandise all plant-based foods in a single area.

Interest in plant-based is occurring among all shopper segments, she noted, adding that plant-based meat activity is not impacting sales of traditional meat department selections. “A majority of customers are looking to substitute a meal with plant-based in lieu of switching solely to a plant-based diet,” Kreider said.

A growing customer base

Seattle-based PCC Community Markets, which has been selling plant-based proteins for more than three decades, has a target audience that is expanding from vegetarians, vegans and occasional plant-based eaters to include people wanting to cut back on meat from time to time, said Scott Owen, senior grocery merchandiser. PCC operates 15 Seattle-area stores. 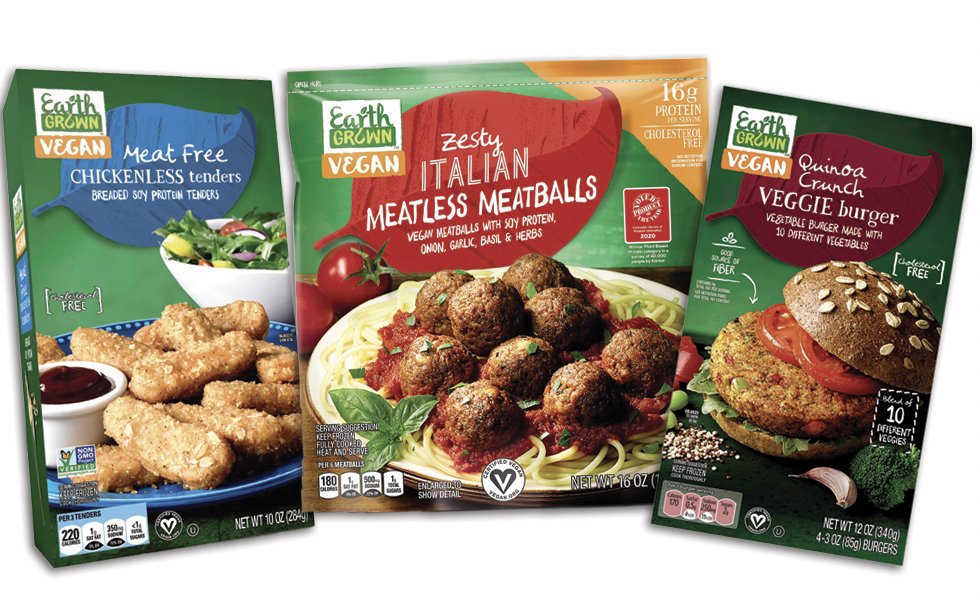 The majority of plant-based meat options, including those marketed by Aldi U.S. under its Earth Grown vegetarian and vegan brand, are found in the frozen case.

Beyond Meat is the top-selling plant-based brand at PCC outlets, with burger patties the best performer. The retailer, which markets most of the patties in a frozen plant-based meals section, also offers the product in meat cases to make it easier for meat eaters to locate, Owen said.

“We also look for smart, natural cross-merchandising opportunities,” he added, which includes buns and condiments. “Many purchases happen when someone is having a get-together and wants to make sure they are inclusive of all their friends’ dietary needs.”

Aldi spotlights the products through its weekly ads and website, she said, and merchandises plant-based meats in the meat section. Kavanaugh noted that Aldi views the growth of plant-based meats “as an ‘and’ rather than an ‘or.’ We can innovate and expand our plant-based offerings while still supplying the traditional meat products.”