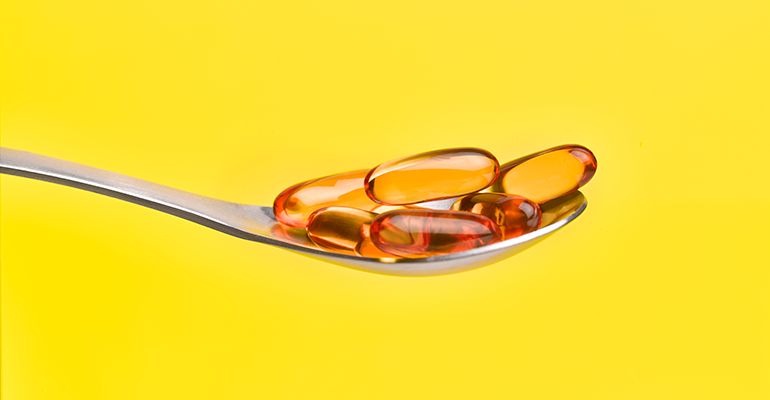 Retailers don't have to rethink their merchandising and marketing around omega-3s, despite lagging sales.

For years, omega-3 fatty acids have been the top-selling brain health supplements—and with good reason. Specifically, the tandem of omega-3 docosahexaenoic acid (DHA) and eicosapentaenoic acid (EPA), abundant in fish, krill and other marine oils, boasts a wealth of potential cognitive benefits.

“A growing body of research supports the role of long-chain omega-3 fatty acids in brain health through the lifespan, from early brain development to older adulthood,” says Andrea Wong, Ph.D., senior vice president of scientific and regulatory affairs at the Council for Responsible Nutrition. “For example, a recent meta-analysis published in the European Journal of Clinical Nutrition showed that supplementation with long-chain omega-3s improved cognition in elders with mild cognitive impairment.”

Omega-3 supplements’ myriad cognitive benefits, along with their well-documented impacts on cardiovascular health, are a big reason why many consumers have purchased these products so consistently—and why natural products retailers have long banked on these sales.

However, in this new age of nootropics and buzzworthy botanicals, are omega-3s still the brain health behemoth they once were? At first glance, Nutrition Business Journal’s latest market data could suggest reason for concern.

As a category, brain health supplements had a record-smashing year in 2020, growing 6.3% and, for the first time ever, breaking $1 billion in sales. Thus, logically, most types of ingredients for brain health marked major sales growth. For instance, sales of combination herbs jumped 14.7%. The catchall “other” category, driven by medicinal mushrooms, and the “other specialty” sector, which includes MCT oils and the trendy memory-support supplement Prevagen, each expanded north of 10%.

But it was a different story for omega-3s. After growing a healthy 6.6% in 2019, the market for brain health supplements containing fish and animal oils inched up a measly 0.9% in 2020.

With total dietary supplement sales growing like gangbusters, and with the brain health category increasing along with it, it’s certainly interesting that omega-3s seemed to stall out last year. But is it alarming? Does it mean consumers have moved on from these classic cognitive-support supplements? Should retailers rethink their merchandising and marketing around omega-3s?

No, no and no, insists Claire Morton Reynolds, NBJ’s senior industry analyst. “Within brain health, omega-3s are not losing favor or consumer interest,” she says. “It’s still pretty consistent that doctors are recommending them and that people are seeking them out.”

A recent survey by the Global Organization for EPA and DHA Omega-3 (GOED) confirms that consumer interest in omega-3s for brain health has not wavered. Additionally, GOED’s research reveals that, among Americans who use omega-3 supplements, 35% to 40% started taking them because of their cognitive effects.

Given these data points, retailers should continue feeling confident about this category. In fact, while 0.9% sales growth may appear underwhelming, Morton Reynolds says the plateau is entirely expected and even a good sign. “This is a very mature category and has been for a while now, meaning omega-3s have become a standby ingredient,” she notes. “So it’s actually almost positive news that sales growth is just steady state.”

And, retailers should note, this “steady state” translates to big-time dollars. Omega-3s may not carry the momentum of certain other brain health ingredients, but fish and animal oils still raked in a whopping $286 million in sales in 2020, according to NBJ.

That’s enough to give omega-3s the biggest market share within brain health. Of all cognitive supplements purchased last year, fish and animal oils accounted for an impressive 27.6%. The next biggest category was “others,” followed by “other specialty” with 15.7% market share and multivitamins with 11.4% of total brain health product sales.

OK, but with those other ingredient categories growing faster, is it only a matter of time before they oust omega-3s from the top spot?

Not necessarily, says Morton Reynolds. For one thing, omega-3s have cemented their status as a science-backed boon for not just brain health but also heart health, mood, inflammation response, healthy aging and even immunity. Therefore, many consumers take them to support their overall well-being. As such, they are unlikely to abandon them for a different supplement that targets mainly just the brain.

In fact, through nootropics are definitely trending, Morton Reynolds says that, by and large, sales of flashier brain supplements like mushrooms, MCTs and botanical blends aren’t coming at the expense of omega-3 purchases. Rather, they are coming from new shoppers to this category.

“Mushrooms, for example, are not stealing market share from fish oils,” Morton Reynolds says. “Growth is being driven by people who wouldn’t have considered a brain health supplement before, so they are not choosing between omega-3s and mushrooms—this is a whole new audience coming in.”

Moving forward, NBJ predicts that the omega-3 market will keep holding steady within brain health. “There are no market numbers to indicate that retailers should change their sets at all, unless a new study comes out or an exciting new company emerges,” Morton Reynolds says. “But from a forecasting perspective, there is nothing on the horizon that will gain a ton of attention for omega-3s—or cause the category to decline.”

In other words, retailers, keep doing what you’re doing. Feature omega-3s prominently within your brain health section, and stay abreast of scientific developments, which could yield even more ways to position these products.