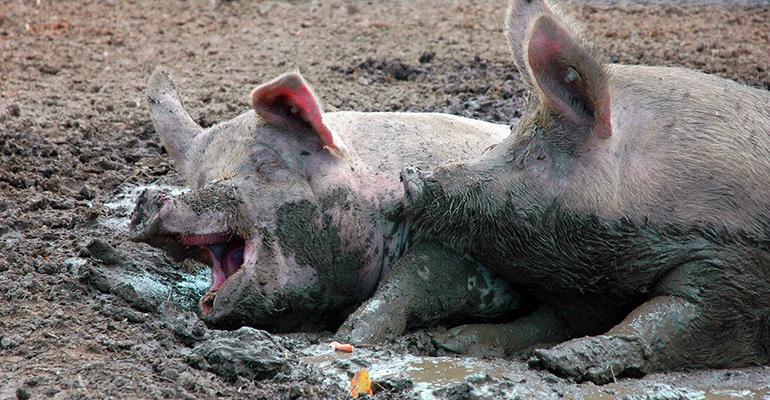 A global survey shows more companies are making animal welfare a top concern, but about 20% have no related policies.

Human health is linked to the health and well-being of animals, as COVID-19 has demonstrated over the past year.

In 2020, the United Nations reported that the rapid increase in demand for animal proteins has led to "large numbers of genetically similar animals" that are kept in close proximity and "in less than ideal conditions." This homogeny and environment allows diseases to spread more extensively among animals and then to humans. A 2019 study published in Nature Sustainability found that, since 1940, the intensification of agriculture is associated with more than 25% of all diseases and more than 50% of zoonotic diseases—infectious diseases that spread to and infected humans.

One result of the COVID-19 pandemic might be that more consumers and an increasing number of investors are considering the welfare of animals in the food supply. The Business Benchmark on Farm Animal Welfare was developed to hold businesses accountable to investors, consumers and organizations for their animal welfare practices.

According to the Business Benchmark on Farm Animal Welfare Report for 2020, producers and manufacturers are doing more to improve animal welfare than retailers and wholesalers or restaurants and bars.

The ninth annual survey, which was released on March 30, measures 150 companies on farm animal welfare, policy, commitment, performance and disclosure, according to the report's introduction. It's considered tangible evidence of a company's commitment to farm animal welfare.

Since the Benchmark began in 2012, the 2020 report is the first to find that food producers and manufacturers' overall average scores ranked higher than the two other groups:

Of the 150 food companies surveyed in 2020, 79% have formalized their policies on farm animal welfare and set welfare-related objectives and targets. That's a significant increase since the first survey in 2012, when 46% of the 68 participating companies had policies and 26% had objectives and targets. Participating companies are slotted into six tiers that describe their commitment and activity regarding animal welfare:

"The 2020 results highlight that companies are continuing to make progress in the Benchmark, with 23 companies moving up at least one tier, and the overall average score has continued to increase," the report states. About two-thirds of the companies fall in Tiers 1, 2, 3 or 4, according to the report.

Companies on the move

While the four companies in Tier 1—Cranswick, Marks & Spencer, Noble Foods and Waitrose—have been so ranked in the past, 23 companies moved up at least one tier since the 2019 report. Thirteen of those were producers or manufacturers; nine were retailers or wholesalers; one was in the restaurants and bars group.

"The improved ranking for Marfrig Global Foods can be attributed to the publication of a formalized animal welfare policy as well as a 2020 Animal Welfare Report, clearly outlining the company’s operations and practices around animal rearing, its priorities and commitments for the continuous improvement of farm animal welfare, as well as its systems and processes in place to implement and monitor these," according to Global Ag Media.

Other familiar companies that rose one tier include Barilla and Unilever, to Tier 2; IKEA, and Kraft Heinz, to Tier 3; and Bimbo, BJ's Wholesale Club Holdings, Mars Inc. and U.S. Foods to Tier 5, according to Progressive Grocer.

The publication also pointed out two highlights from the report:

"The 2020 BBFAW Benchmark report reveals that 59 of the 150 companies appear in the lowest tiers (Tiers 5 and 6), indicating these companies provide little or no information on their approach to farm animal welfare. Even more surprising is that one in five (31) trusted global food companies has no farm animal welfare policy at all," wrote Evans Kipkorir in Some global food brands are failing animals according to new report.

Notable companies that dropped to Tier 5 include General Mills, Publix Super Markets and the distributor UNFI, according to the report. The addition of four new questions, as well as change to the weighting of the performance questions, to the scoring had a negative effect on overall scores.