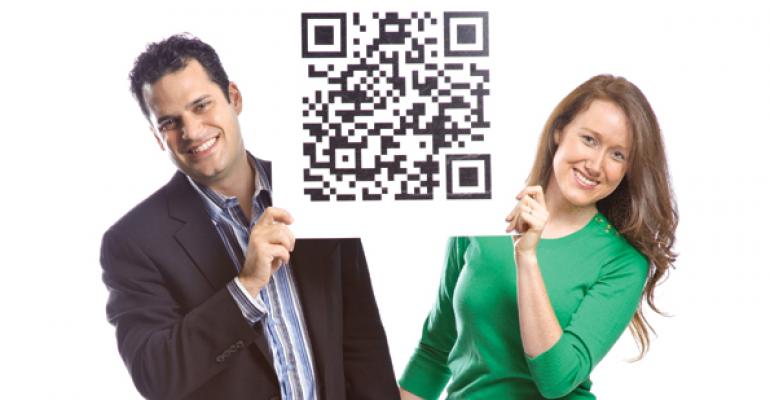 <p> Danny and Sondra Houghton show one of One Degree Organic Foods&#39; QR codes.</p>
The localization movement is all about connecting customers to stories about ingredient producers, no matter if those ingredients are near or far. Here&#39;s how independent natural retailers can help.

Pass your cellphone across the square, black, quick-response (QR) code on a loaf of One Degree Organic Foods Lentil Grain Bread, and a 31-second video about Canadian lentil grower Bob Balfour will begin to play on your small screen.

Reach for a bar of Askinosie white chocolate and you'll find a photo of Peter Cruz, the Filipino farmer who grew the cocoa beans for the confection inside the wrapper.

Punch an ID number from Gaia Herbs' Adrenal Health formula into the Meet Your Herbs app on your smartphone, and you'll find out when and where its ingredients were grown, and how they fared on a litany of purity tests.

These are three packaged goods made with multiple ingredients from distant lands. Yet somehow, consumers feel a sense of connection with them. That's the idea.

"What we are trying to do is bring that local ‘I know who grew my food and I trust them' concept to a consumer packaged good that can have a wider distribution footprint," says One Degree Organic Foods cofounder Danny Houghton.

One Degree, Askinosie and Gaia are among a growing number of CPG companies using cutting-edge technology, creative package designs and intimate person-to-person marketing to tap into the growing consumer desire for transparent, ethically sourced ingredients across all aisles of the grocery store. According to market research firm Mintel, one in six adults buys "local" whenever possible, and 52 percent now say it is more important to buy "local" produce than organic. But for years, most local offerings were confined to the produce (or possibly milk and meat) section, leaving shoppers in the middle aisles guessing about the practices behind the boxes and bottles found there.

That's changing, however, thanks to progressive CPG companies that are realizing they too have a compelling story to tell, and the independent retailers helping them tell it, says John Grubb, a managing partner with Boulder, Colo.-based marketing and advertising firm Sterling-Rice Group.

"Local is getting a lot of celebrity right now, but there is a much broader dynamic that companies can participate in in various ways, depending on their category and their scale. It is about intimacy on the part of the consumer," says Grubb. "Fundamentally, consumers don't want to eat mass-produced, genetically modified food that could come from anywhere, so the more companies can give people assurances that they are paying attention to where their ingredients come from, the more comfortable consumers will be."

Houghton describes his British Columbia–based bread and bulk grain company as "half technology/media company" and "half food company." For two years before launching, One Degree worked to refine its mobile apps and online tracking system. It also hired a full-time professional videographer to shoot micro-documentaries about each of its 13 growers.

One Degree Organic Foods hit the shelves in March 2012 and is now in 1,000 North American retail stores, where customers can scan the QR code, get a list of ingredients, tap a picture of one, and find out who grew it. The time is right for this kind of storytelling, Houghton says.

"There is a basic distrust of many of the agencies that are supposed to keep us safe, so people feel like they need to take matters into their own hands," says Houghton. Sure, most people would love to buy local, but that's not always practical. "There is always a challenge with scale, especially if you are trying to do organic local. What we are saying is, ‘our farmer may not be within a 50-mile radius of you,' but he shares that ethos," Houghton adds.

While One Degree's technological approach is among the most ambitious, it is not the first. In 2007, Dole Food Company launched a program in which shoppers can enter a three-digit code on a banana to virtually visit the farm where it was grown. In June 2010, Gaia Herbs launched its Meet Your Herbs traceability program. And several midsize CPG companies are exploring ways to localize or regionalize their supply chain and highlight it via technology, says Grubb.

Meanwhile, other companies are changing their labels to better tell their stories.

For instance, 40-year-old whole food supplement maker Mega Food recently unveiled a new lid, emblazed with vegetable-colored "fresh and local" symbols—a nod to the fact that it sources its non-GMO fruits, vegetables and whole grains from family-owned farms in the United States and Canada.

Big Tree Farms is an Indonesia-based company that makes coconut palm sugar, sea salt and other packaged products via a unique collaboration that benefits 14,000  farmers there. "We want to get the message out loud and clear that we are an authentic, vertically integrated company based on the ground in Indonesia. We are not buying from middlemen buying from middlemen and just spinning the story," says Big Tree CEO Fred Schilling.

Big Tree recently redesigned its label too, but Schilling stresses that new packaging is not enough. "Unfortunately, there is a lot of greenwashing going on out there," he says. "It's important that retailers ask hard questions of their suppliers and learn the stories of some of these companies."

Askinosie Chocolate founder Shawn Askinosie uses candy bar labels and social networking, particularly Facebook, to tell the story of his fair-trade, socially responsible chocolate company and the numerous humanitarian causes it supports. But he says his most effective means of communicating its message is the most "low-tech."

"I spend a lot of time traveling around to the stores that carry our chocolate and telling our story," he says.

While some CPG companies are working to bring a local feel to products grown and manufactured thousands of miles away, others are working to scale up locally produced packaged products so more people can enjoy them. But such budding entrepreneurs often run into trouble when they knock on the door of larger retailers.

Since the iconic natural foods store re-opened in 2011, Kamibayashi has made a point of supporting local and ethically sourced companies (no matter how small) to assure that customers can feel connected no matter which aisle they are in.

"We let everyone know that we are an open door for anyone who has a great idea," says Kamibayashi. "And because we are an independent, we are able to hold their hand more than other retailers can."

Kamibayashi has gone so far as to walk the aisles of local farmers' markets in search of new packaged products to carry in the store. He then mentors their creators on how to price and label their products accordingly for retail. Once that's been done, he gives them a 90-day trial period, in which they get prime shelf space and in-store demo shifts. (In the case where he can't find a local packaged good, he looks for innovative products such as Big Tree that use fair-trade practices and give back to the communities from which they hail.)

Walk through the store on a given day and you might find someone from MMLocal sampling jarred Western Slope peaches, Boulder mom Dara Haid handing out samples of her Apricot Oat Raw Balls or someone from Big Tree telling the story of its Indonesian farm.

"When people walk in they see new items they have never seen before and have a face-to-face interaction with the people making them," says Kamibayashi. "It entrenches us as the community retailer."

In the end, adds Grubb, the retailer and the consumer both benefit.

"It is about clawing our way back to a relationship with our food sources," says Grubb. "Sure, we prefer organic and non-GMO and local when we can get it. But most importantly, we want food with integrity." No matter where it comes from, or which aisle it lands in.

Why local is logical for every indie natural retailer
Jan 27, 2013