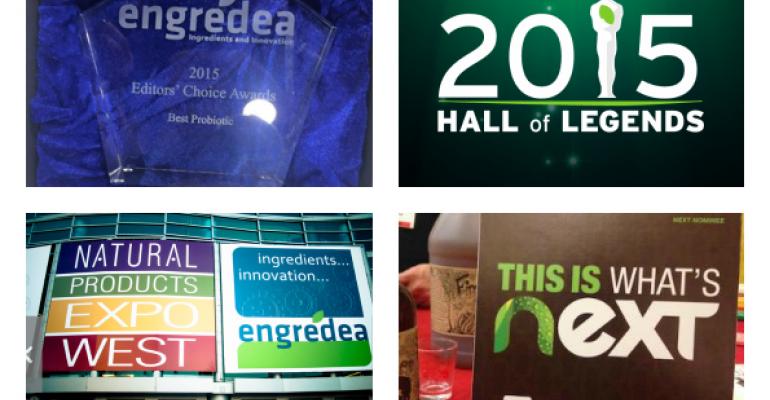 Each year, to celebrate the most inspiring ideas and people in the health and wellness world, New Hope Natural Media confers numerous prestigious business and consumer awards at Natural Products Expo West. Here&#39;s a roundup of who won what this year.

Each year, to celebrate the most inspiring ideas and people in the health and wellness world, New Hope Natural Media confers numerous prestigious business and consumer awards at Natural Products Expo West. Here's a roundup of who won what this year. 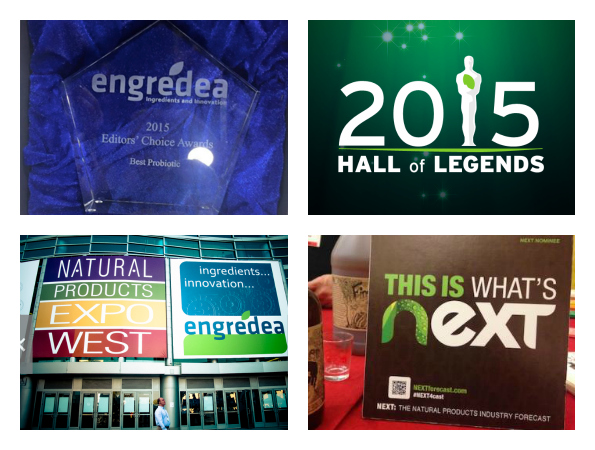 Now in its 17th year, the NutrAward is the nutrition industry’s longest-running award, recognizing and rewarding suppliers that use ingredients with scientific merit, efficacy, market potential, safety, innovation and the ability to increase market credibility.

NattoPharma’s MenaQ7 delivers natural vitamin K2 as a fermentation extract, recognized in scientific literature as a method which supplies the body with an optimal vitamin K status. In a study due to be published this May, patients suffering from hardening of the arteries who were given MenaQ7 experienced relief from symptoms and an apparent reversal of the condition.

According to Frode Bohan, chairman of the board of NattoPharma, vitamin K2 is believed to protect against cardiovascular disease, and the proof is in the clinical trials that have shown this to be so.

Garden of Flavor juices are organic, high-pressure processed, using fresh-ingredients, and they have a line which features Ganeden Biotech’s BC30 strain probiotic.

The probiotic addition upped the ante in the pressed beverage realm this year; a supply side innovation worthy of merit. 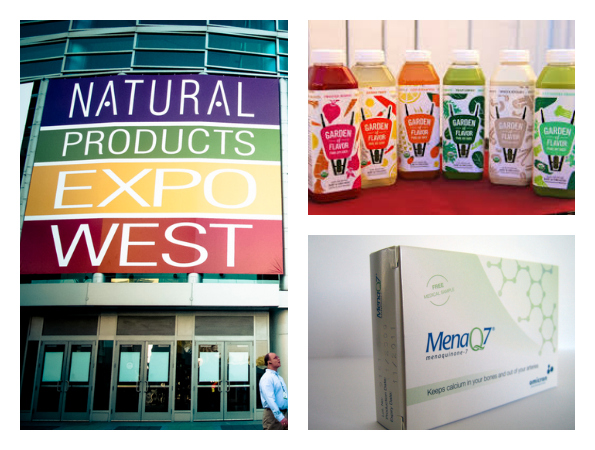 The 2015 Engredea Editors' Choice Awards were awarded to leading-edge ingredient suppliers that are making waves towards clean-label, sustainable and transparent ingredients.

Made from Non-GMO tapioca, potato and saga Novation native starches provide food and beverage manufacturers with a method of creating clean labels for products such as custard, salad dressings and dairy desserts.

A clean, organic solution to silicon dioxide is provided by Nu-FLOW, a non-nutritive flow agent being used by a number of supplements.

PhytoClean technology uses temperature and pressure to trick water into behaving like an organic solvent. This allows for polyphenols, alkaloids, glycosides and specialty carbohydrates to be cleanly extracted so that they can be used in supplements, beauty products and foods.

The sassyberry is here to give acai a run for its money. With its high antioxident status, and naturally sweet taste, this little purple fruit is putting some sass into smoothies.

Ganeden has built its business the right way, starting with a strong foundation of science that now numbers 20 published studies showing efficacy of its ingredient for digestive health, immune function, even utility as an adjunct for rheumatoid arthritis.

Novel Ingredients rings the bell on the quality spectrum, by testing materials before they enter, and after they leave the facility, they are standing up against misinformation and proving that botanical suppliers are producing products worthy of recognition. 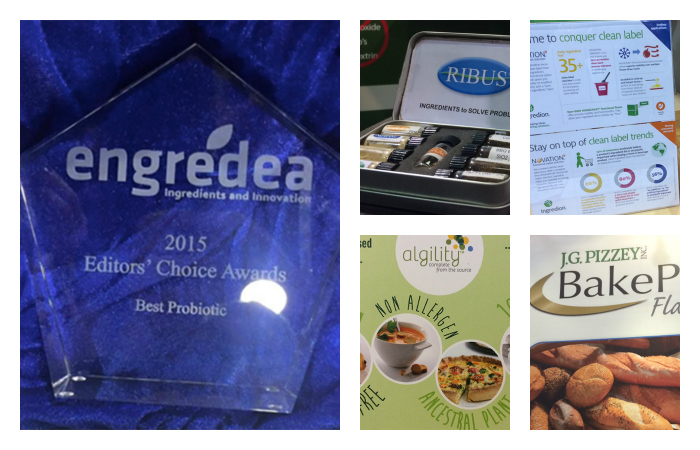 Each year at Natural Products Expo West, New Hope Natural Media honors the industry's greatest contributors in its Hall of Legends ceremony. Legends are individuals at the center of stories about change—influencers who change the way we do what we do with enduring impact.

For over 40 years, Al Powers has been a pioneer in the natural products industry, actively involved in health food retailing, growing the NOW brand, defending the rights of consumers to buy natural products, and working with industry trade associations.

Andy and Rachel Berliner founded Amy’s Kitchen 26 years ago on the revolutionary idea that convenience food can be natural, nutritious, and delicious. From the couple's humble first product, a veggie pot pie handmade in their Sonoma farmhouse, to the 250+ Amy's products on the market today, Andy and Rachel have changed the natural foods landscape by staying true to themselves and their vision.

Doctor Sam Rehnborg is the main spokesperson for the Nutrilite® brand of vitamins and dietary supplement products. His sole purpose is to inspire people to understand how they can take personal responsibility for their health and the nutritional health of their families and others—through a rich plant-based diet and an active lifestyle.

Horst M. Rechelbacher, the founder and CEO of Intelligent Nutrients LLC, was inducted into the Hall of Legends posthumously this year. Intelligent Nutrients was founded in 1992 as a dietary supplement line and has since evolved to become a certified organic health and beauty product company. Horst authored four books: "Minding Your Business," "Rejuvenation," "Aveda Rituals" and "Alivelihood." A sought-after speaker and collaborator, he counts TEDIndia among his innumerable speaking engagements

Doctor Janet Zand, L.Ac., O.M.D., Dipl. Ac., Dipl. CH., was co-founder of Zand Herbal Formulas and chairman of the board from 1978-2002. The company spent over 20 years as a market leader in the herbal industry, self regulating and encouraging organic herbal farming. Doctor Zand’s original, clinically based formula, Insure Herbal, was the first popular Echinacea/Goldenseal formula sold in the United States. Shortly thereafter, ZAND introduced male and female formulas, becoming the first American company to combine Western and traditional Chinese herbs for the consumer.

Jeffrey Hollender is co-founder and former CEO of Seventh Generation, which he built into a leading natural product brand known for its authenticity, transparency and progressive business practices.

Margaret Isely was born Ann Margaret Sheesley on August 13, 1921. In the 75 years of her life, she numbered among her many accomplishments being the parent of seven children, grandmother of 14, co-founding the Natural Grocers by Vitamin Cottage health food store chain, a bid for Colorado State Senate in 1958, and serving as president of the Natural Foundation for Nutritional Research, president of the Rocky Mountain Nutritional Foods Association, and executive council member of the National Nutritional Foods Association.

Michael Mooney’s voracious appetite for nutritional science began in 1967, when he reversed his “sugar-kid” brain problems by abandoning the standard American diet, taking high-potency niacin and other vitamins and seeking out natural and organic foods in his hometown of Omaha, Nebraska. Over time, Michael became a leader in nutritional science. Michael continues his efforts to improve the public’s health, with his main focuses being progressive nutritional research and education, and the recent invention of SuperNutrition’s patent-pending new product, Heart Smart, a ground-breaking supplement for better cardiovascular health

Peter Roy is the former president of Whole Foods Market, the nation’s largest retailer of natural and organic foods. After Leaving Whole Foods, Peter joined the boards of White Wave Foods and Stonyfield Yogurt and became the first operating advisor for North Castle Partners. Over the last 15 years, Peter has continued to work with many entrepreneurs to build highly successful brands in the natural and organic foods industry including Applegate Farms, United Natural Foods, Avalon Natural Products and Naked Juice. 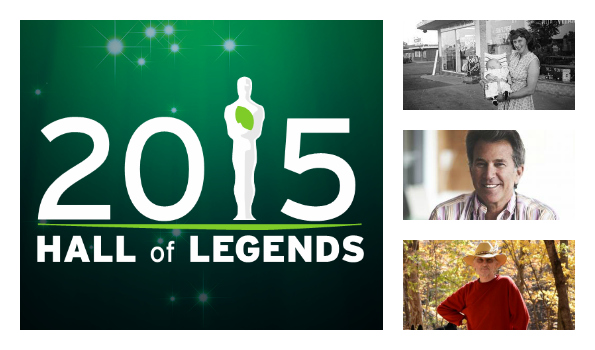 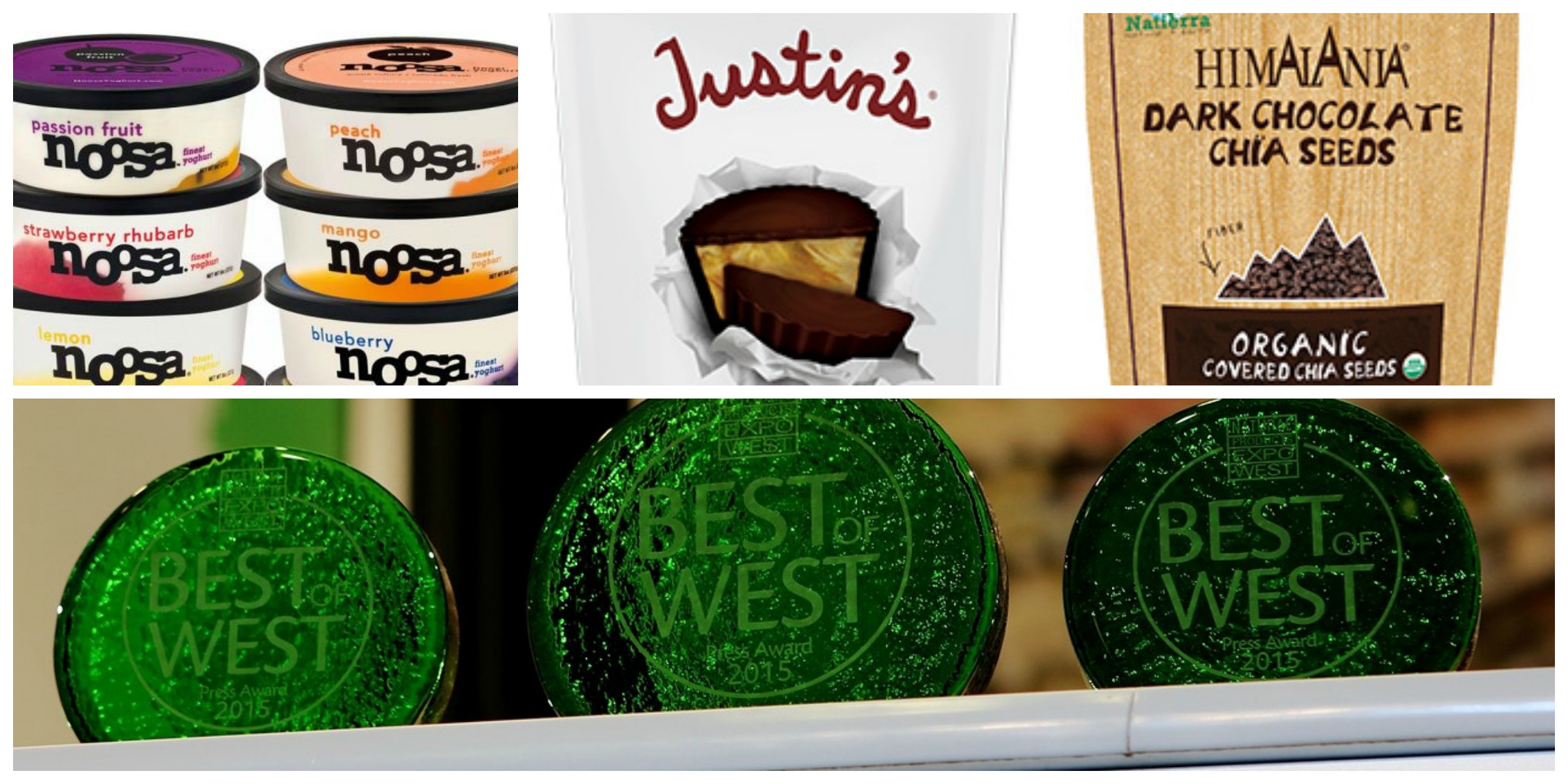 The Best of West Press Awards are voted on by over 1000 members of the press and presented to the three most innovative products exhibiting at the event.

Justin's have recently moved their peanut butter cups into the realm of miniature, making them more sharable and adorably cute. Downsizing in scale but not flavor, these mini cups share the organic goodness of the regular version and come in a 4.7 oz bag.

​Noosa's yoghurt is uniquely thick, creamy and deliciously decadent. Made with milk from a local, family-owned dairy in Colorado, and sweetened with local honey, Noosa's yoghurts allow for guilt-free dairy indulgence. 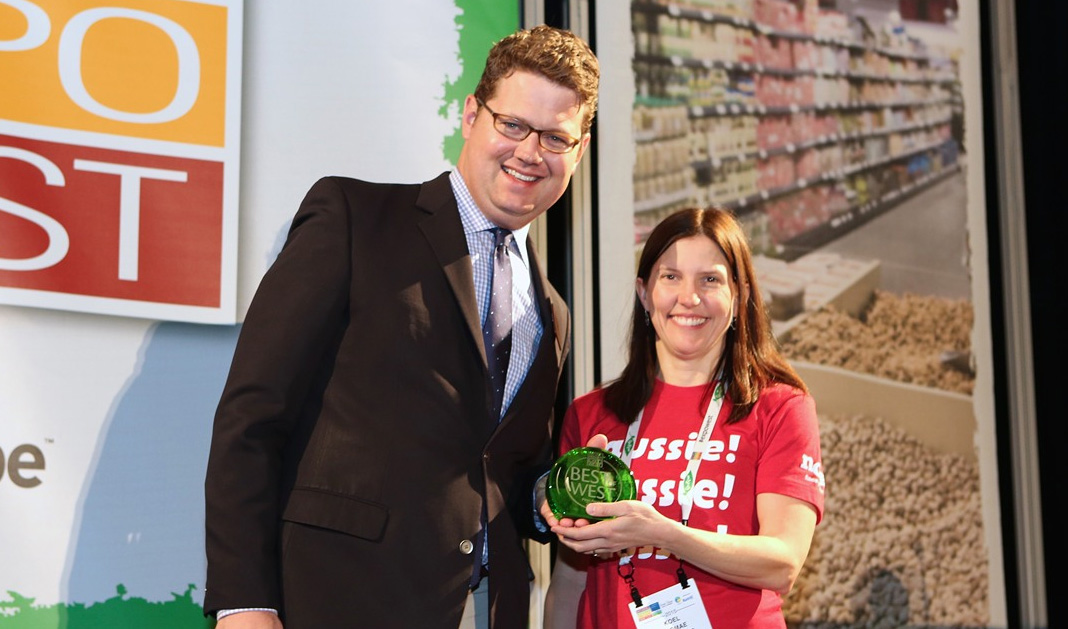 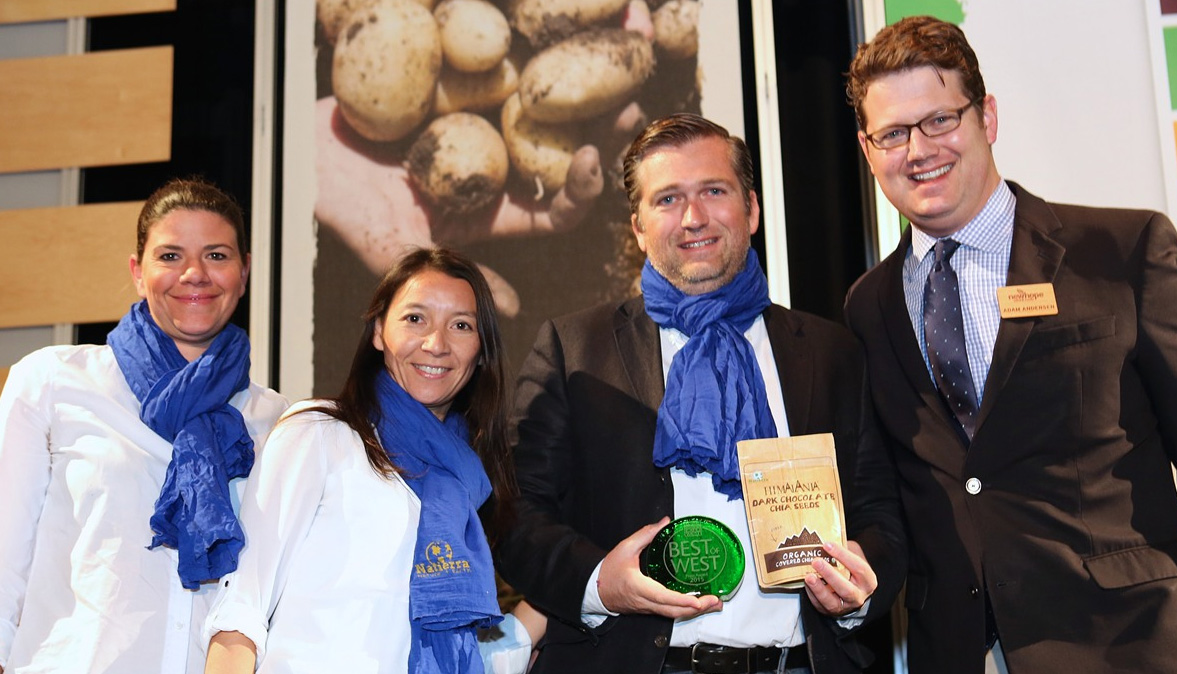 Colorful, and made from a plant-based gelatin, the cups come in a variety of seasonal flavors. Recognized for sustainability and responsibility, Loliware is a delicious alternative to ‘disposable’ plastic cups. 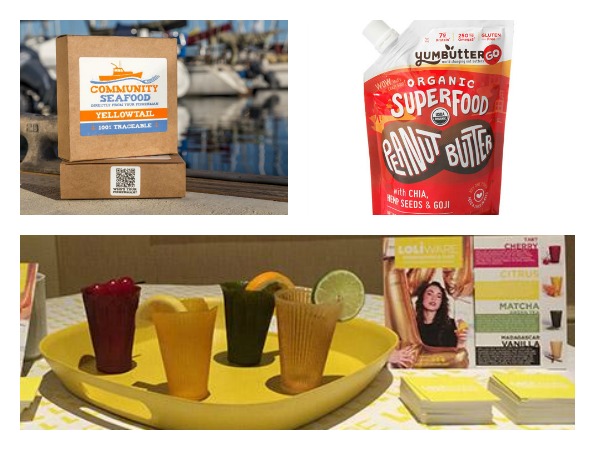