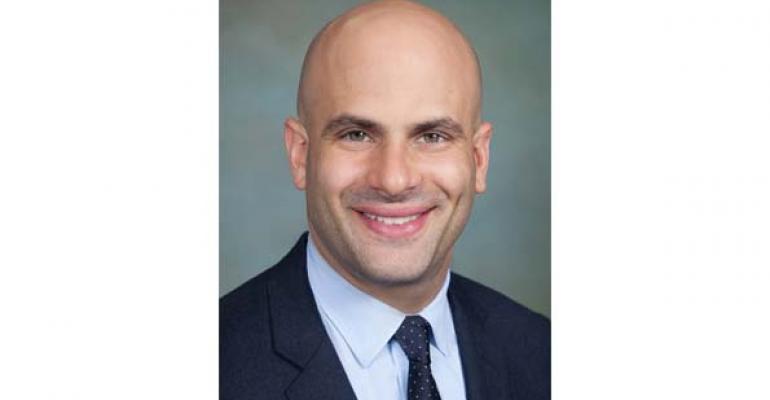 Sam Kass has put his passion for healthy cooking and eating to action as personal chef to the first family and, later, as senior policy adviser on nutrition for the White House—working on initiatives like the first lady’s Let’s Move campaign and the White House’s famous vegetable garden.

Kass will deliver Natural Products Expo West’s Friday keynote address. Here, he chats with Natural Foods Merchandiser about his time with the first family, the importance of healthy eating and why he’s optimistic about the future.

Natural Foods Merchandiser: What was your role as personal chef to the first family and, later, as you entered the White House?

Sam Kass: I was cooking for them in Chicago and helping them out a few times a week during the campaign. The first lady didn’t really have any staff, per se, and so I helped make sure the girls got good, healthy food, helped her clean out the less healthy options, and did a lot of shopping at the farmers market in Chicago—and cooked good, healthy, delicious food. I was with them in Chicago from 2007-2008, and then we came to the White House.

I came into the White House with a dual role. My title was food initiative coordinator and, though I was cooking dinner five nights a week, and this continued the whole time I was there, the main task when we first got there was doing the garden. And then I helped develop, create and lead the Let’s Move campaign.

NFM: Why was the garden such an important initiative?

SK: The garden was where it all started, and working to establish it was one of the greatest joys I’ve ever experienced. It’s a spectacular symbol of the importance of food, where it comes from, how hard it is to grow it, and really lifts up the significance of eating more fruits and vegetables.

It’s 1,500 square feet. The first lady brought in young kids from local communities (and, increasingly, from all over the country) to plant the garden and come back to harvest and eat in the garden. And it was just always the best to have a garden event. We would do three large events each year and, additionally, every week we’d bring groups of school kids in and host tours. I, and the other chefs, would also cook out of it every day, so we used the garden all the time. It was my sanctuary in the White House.

NFM: How did this transition into Mrs. Obama’s Let’s Move campaign?

SK: In Chicago, we decided that if the garden went well, we’d like to do a big childhood health campaign. And the garden went really well, so we started developing Let’s Move.

The first lady wanted to develop an initiative and a strategy that would help families raise healthier kids. We consulted with a lot of different experts and thought leaders and developed a strategy that focused on the key barriers making it hard for families as well as the key opportunities to make progress. We wanted to focus on kids for two reasons: all the evidence shows that the earlier you start, the more effective your strategy will be, and also that the outcomes will be stronger. It’s much easier to get kids started on the right track and keep them there, than try to change the habits of those on the wrong track.

NFM: What were some of the highlights of the Let's Move campaign?

SK: The fundamental goal was to ensure that all kids could grow up healthy and reach adulthood at a healthy weight, within a generation. We knew coming in that it took us decades to get into the situation that we were in, and it would take us decades to get out of it. And so we looked at a few areas of focus: that families have access to the food and information to make the best choices, that 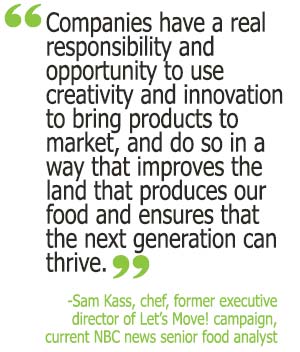 kids are getting enough physical activity throughout their day, and improving school food. And we made tremendous progress in all of those areas. We overhauled school nutrition, did public/private partnerships across the spectrum to ensure the private sector was working to lead on these issues, and overhauled the nutrition facts that will be finalized in the coming months.

NFM: What can attendees expect from your speech at Expo West?

SK: Food is at the crossroads of the most important issues of our time. It’s at the foundation of how we’re going to solve climate change and it’s the basis of the health and well-being of the nation, which has implications for our economy, health care system, national security and education system. The stakes are pretty high, but the innovation that I’ve been seeing across the country is pretty inspiring, so I’m optimistic.

Companies have a real responsibility and opportunity to use creativity and innovation to bring products to market, and do so in a way that improves the land that produces our food and ensures that the next generation can thrive and really become the generation that takes on the challenges of the future. That’s where the market is going—people want better food of a higher quality, sustainably grown, with more transparency, and it’s nothing but an opportunity.

A new process for the New Hope NEXTY awards