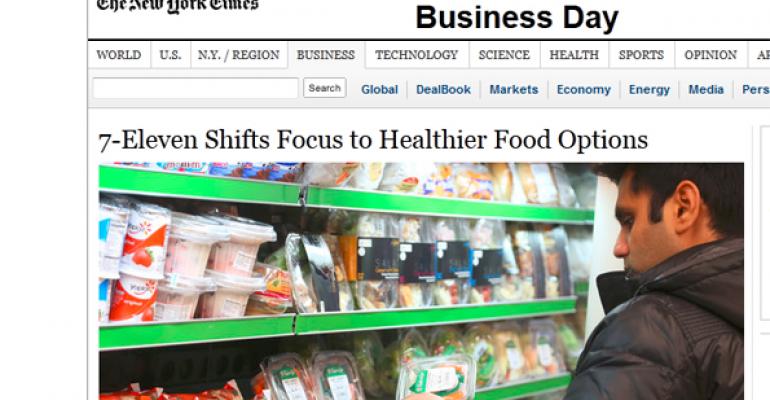 The convenience store chain 7-Eleven is the latest national chain that&#39;s adding more natural and organic food offerings. It joins the ranks of Walgreens, Kroger and others that want a piece of the natural foods market.

The natural foods consumer continues to capture the attention of mainstream retailers, even moving into the Big Gulp's territory.

Convenience store chain 7-Eleven has introduced more fresh-food and portion-controlled options over the last year, the New York Times reported in a look at the shift to healthy options this week.

By 2015, the retailer aims to have 20 percent of sales come from fresh foods in its American and Canadian stores, up from about 10 percent currently, according to a company spokesman.

“We’re aspiring to be more of a food and beverage company, and that aligns with what the consumer now wants, which is more tasty, healthy, fresh food choices,” said Joseph M. DePinto, chief executive of 7-Eleven, a subsidiary of the Japanese company, Seven & i Holdings.

Interestingly, the article notes the move may in part replace declining cigarette sales.

Fresh foods can help offset some of those losses. The markup on such merchandise can be significant, bolstering a store’s overall profits. It’s also a fast-growing category.

Food service certainly isn't new to the convenience store chain, but health just might be.

As 7-Eleven refocuses its lineup, the retail chain has assembled a team of culinary and food science experts to study industry trends and develop new products. Such groups have been around for a while at fast-food restaurants like McDonald’s and packaged-goods manufacturers like Kraft. But it’s a relatively new concept for players like 7-Eleven, which have typically relied on their suppliers to provide product innovation.

“We’re working to create a portfolio of fresh foods,” said Anne Readhimer, senior director of fresh food innovation, who joined the company in May from Yum Brands, where she had worked on the KFC and Pizza Hut brands. “Some will be for snacking, some for a quick meal, but we hope everything we offer our guests is convenient and tasty.”

Such moves will likely grow as Whole Foods Market, Natural Grocers by Vitamin Cottage and other retailers grab investment attention. Meanwhile, Kroger and other major grocery chains continue to improve their organic offerings and even tout the availability of nutritionists in their aisles. Walgreens, too, is adding natural and organic sections to its stores.

Natural retail leader Lisa Sedlar announced that she was leaving her position with New Seasons Market to open a chain of convenience-store-sized grocery stores that emphasize healthy selections. She offers these tips for natural foods retailers wanting (really needing) to compete with convenience.

What traditional competition changes are you seeing in your market, and how are you addressing them? We'd love hear below or via email: [email protected]