Why organic soda maker Oogavé is asking you to save it

As Oogav&eacute; looks to its friends and fans for crowdfunding to stay cash-flow positive, Co-owner Gannon Merrell sheds light on how this mom and &quot;pop&quot; op got here. 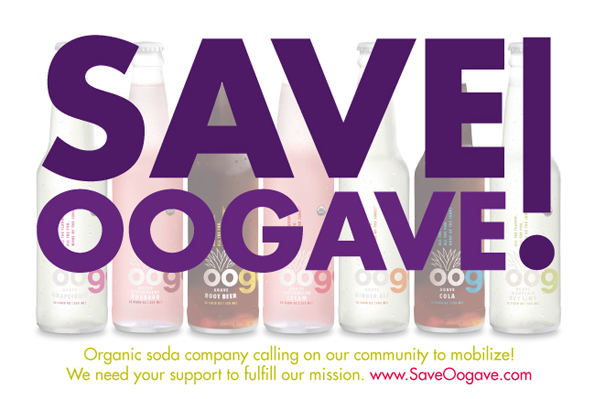 Oogavé is calling on its organic-loving community for support. By the time you read this, there will only be 27 Flexible Funding days left. At press time, they'd reached $4,071 of their $500,000 goal.

The certified organic, agave-sweetened soda is sold in all 50 states so, like us, many may be wondering, what happened? According to the Save Oogavé website, the company found themselves "short on cash, but long on opportunities and successes" in need of "an extra push to get to the finish line!"

As part of its explanation, Oogavé points to soda's "big two"—you know, C*** and P****, those four- and five-letter-word beverage manufacturers that each sell more in 20 seconds than Oogavé sells in an entire year—as having cast a shadow over its business.

Those participating in the crowdfunding campaign will get more than a warm, fuzzy feeling for efforts to "support a mom & 'pop' operation (pun intended), care about the little guy, wrinkle your nose at corn-syrup, push for more organic food products, buy independent, dream big, and keep the dolphins safe." There are perks! Starting at $5 and stopping at various contribution echelons along the way to $6,000, prizes range from a button and stickers pack to a T-shirt, soda case and finally, a party at your place.

They've even got one taker for the very interesting $500 option that buys you an hour-long phone consultation with "Fulcrum of Finance" and Co-owner, Gannon Merrell, for those "dreaming about or planning to build a business in the natural food industry" who will be able to learn from Oogavé's mistakes and successes, potentially saving thousands. 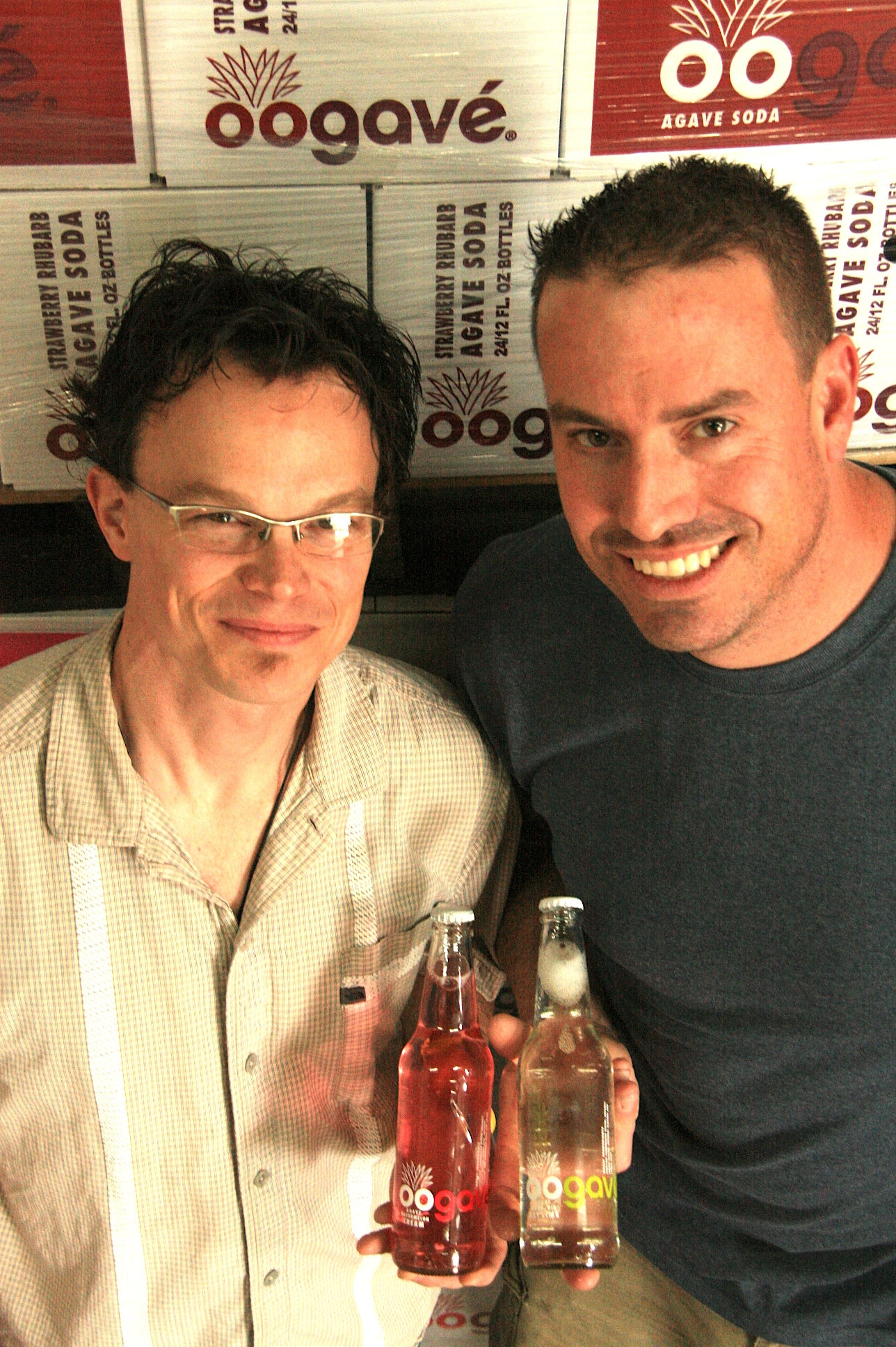 Here, Merrell lends some insights into how business got to this point... free of charge.

newhope360: Aside from your "big two" competitors, what was the biggest contributing factor to winding up in this situation?

Gannon Merrell (pictured on the left): For beverage, velocity is the key factor in getting to a critical mass of sales to be self-sustaining. And for Oogavé, one of the biggest challenges to velocity is shelf price. Our product is very heavy to ship and the ingredients come at a higher expense than other products, so it is tough to maintain price parity with our competition.

We don't control the retail price, and sometimes despite our best efforts, the price point on shelf exceeds a threshold which dampens demand. It's not like that in all outlets, but that is certainly one of our biggest challenges.

newhope360: Do you think agave's bad press had any impact?

GM: Unfortunately, the blog that got the greatest traction was written by someone with a lot of misinformation and an ulterior motive—selling a competing product. Nevertheless, that article definitely had an impact. It was tangible in the phone calls we received from customers and from retailers. The most frustrating thing about it was not any loss in sales, but the idea that so many people believed what one person wrote about online without doing any further research on their own.

Agave producers, suppliers, sellers and others involved with agave did the intelligent thing by responding with facts and information. Unfortunately the damage had already been done, and to this day people are still repeating the claims of that article in further online publications. There is not a lot you can do other than to provide people with real information and hope they are able to sift through what they have been given and arrive at the right conclusion.

GM: That figure is what we forecast we will need to fund operating losses until we reach break even. Most startups take about five years to reach this point. We expect to get there in year six. Aside from helping to offset marketing and promotion costs, the money will also provide us with the means to launch Oogavé LoCa, our new line of diet sodas that are delicious and avoid the funky aftertaste of the current options on the shelf.

Why should people donate? Because they care! By voting with your dollars, both on the SaveOogavé campaign and at the grocery store, you help support companies who care about making healthier options for consumers and options that don't contain GMO products, chemicals or preservatives. You are supporting a company that is making a dent in obesity and diabetes by reducing excess sugar consumption through its use of agave as well as keeping the portion size appropriate (12 oz.).

newhope360: Who are you targeting as contributors for this?

GM: We are broadcasting the campaign as far and wide as is humanly possible. We are appealing to anyone who has an interest in helping support small, local companies as well as those who are passionate about organic food products.

newhope360: Tell me about the $500 option. Can you give us a little taste of what kinds of advice you'll offer so that other companies can avoid similar pitfalls?

GM: If I divulge all my good material here, nobody will sign up for that option! Seriously, though, we have learned, from the ground up, a vast amount of information about the consumer packaged goods industry over the past four years. Nobody explained to us how the industry worked, so we learned a lot just by getting beat up in the trenches. Bear in mind, we received a lot of help along the way from some amazing resources right here in Colorado.

I am open to answer any questions that come my way in the hour, however I expect that I will provide a lot of information to help people adequately prepare for the costs and potential pitfalls of launching a brand and strategies to minimize them.

newhope360: How will the crowdfunding keep your business from falling back under the shadow of the "big two" soda companies?

GM: A successful campaign will allow us to get to cash-flow positive. With that comes a significant shift in focus from surviving to thriving. Once we are at that stage, we can focus more energy on really maximizing our growth and our connection to the consumer. Once Oogavé is at that stage of development, it will be big enough to carve out its own niche in the marketplace and expand from there.

newhope360: Why did you choose Indiegogo for your crowdfunding campaign?

GM: There are two primary platforms for crowdfunding, and the other alternative is really focused on new projects that are pre-revenue. We thought about pushing something out on our own as well, however it is important that people recognize this is a legitimate effort. Our feeling was that Indiegogo provided that legitimacy as well as a very friendly and easy-to-use interface for those wishing to support us.

GM: It is very time consuming! More important, though, we have learned there are tons of people out there willing to help out the little guy. Not only are we getting great response from the campaign, we are also receiving offers of help to maximize our SEO, promote through affiliate networking, back office support and more. We've also received help from many local brands who are our friends in the form of products for one of our offerings that will be added mid-campaign (so come back a few times to find our new additions). We are very grateful for the support that is being offered, it means a lot to us.