Food entrepreneurs from the Bay Area of Northern California highlight their missions to improve society, the environment.

The 10th annual Food Funded, conducted virtually on Oct. 6 and 7, hosted more than 400 food entrepreneurs and investors for educational programs and investment presentations.

Presentations on the first day focused on JEDI (Justice, Equity, Diversity, Inclusion) issues, while those on the second day examined food systems and climate, particularly regenerative practices and carbon drawdown. Slow Money Northern California and New Hope’s Esca Bona, which created to support the good food movement, was an organizer and sponsor of Food Funded.

Of the 24, four companies received honors:

When April Fenall returned to the Bay Area in 2009, she couldn't find work where she felt she could truly be her whole self: a Black, lesbian woman with a disability who had been incarcerated, who survived trauma, who is a single parent and had been raised by a single parent.

"I was thinking about where I could land, where I could bring all of me to the door," Fenall said in her pitch. "I didn't see businesses owned and operated with lived experiences like mine." In addition, she didn't see many jobs with a safe and inclusive environment that paid a living wage.

Fenell started Piikup, a socially responsible delivery company, in January 2016 out the backseat of her Saturn Ion. She decided to hire employees—especially people who have been incarcerated—instead of relying on gig workers, as so many do, to educate them in logistics and transportation and give them marketable skills, she said.

"We get to help local businesses create a legacy and make the relationship more than transactional," Fennell said. 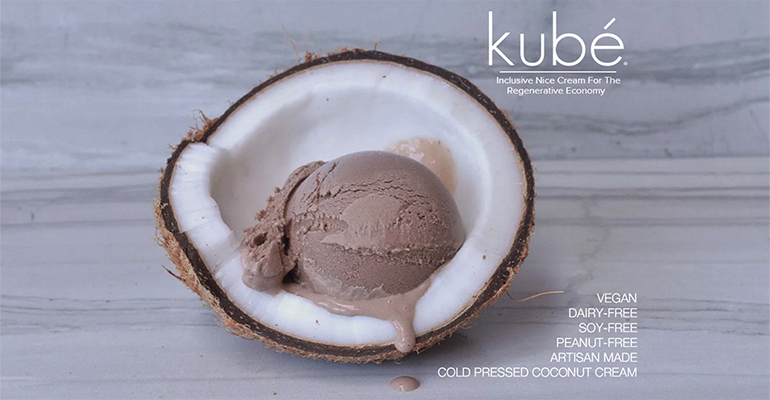 "Children are the messenger of an unknown future," Nortey said in her pitch. "But if we teach them how imperative it is to building the next inclusive and regenerative—full-circle regenerative—economy that restores life, health, joy, equity—back to people, back to the soil, back to the ocean—these things are really important."

One example of our broken food system is that nearly all coconut cream on the market includes synthetic chemicals, she said.

"Our value proposition is that we're building new regenerative food models that restore life and health," she said.

Nortey carries out her regenerative philosophy by giving the byproduct of her ice cream, coconut shreds, to urban farms.

In addition, Nortey recently acquired a 5,000-square-foot space in Oakland, California, for production, which will create local jobs "grounded in racial and gender equity, in climate justice."

"So what we're really talking about is securing local jobs here," Nortey said.

Dinesh Tadepalli, an engineer who works for Intel, has found a calling in saving the oceans from plastic pollution. By 2050, the weight of plastic in the oceans will equal the weight of the fish there, he said.

"Once my beautiful son and daughter were born about 2 years ago, a question came into mind: What future are we leaving them behind?" Tadepalli said in his pitch. "So I decided I need to secure and preserve nature for my son and my daughter and also for all the future generations."

Only 15% of the plastic created since 1907 has been recycled, and only 9% of compostable utensils are property disposed of, so we need an alternative, he says.

"So we innovated, invented Incredible. Incredible reinvents the way we eat our food by replacing singles-use plastic cutlery with edible cutlery."

To further achieve its carbon-negative goals, Incredible plants trees to offset the carbon footprint of its shipping, and powers its factory in India with solar-generated electricity, he said.

Climate, Investor Innovation and Impact: Down to Cook

Trishna Saigal, who has a doctorate in chemical engineering from Carnegie Mellon University, worked in food development creating dairy and seafood alternatives. She grew concerned, however, that those highly processed foods were expensive and not necessarily healthy.

So she started her own company, Down to Cook, "to make plant-based food that is healthy and inclusive."

"It lets you take a vegetable from the side of your plate to the center," Saigal said in her pitch. "You could take the vegetables that are in your fridge now and convert it into a delicious meal in minutes."

With the shelf-stable mix, a vegetable, a side dish and a sauce, a meal for four costs about $8.50—about the same price as a meal made with Hamburger Helper, she said.

"Just imagine all the people we can reach with healthy, plant-based food when we're at that price point," Saigal said. "This is by design. This is what I set out to do."