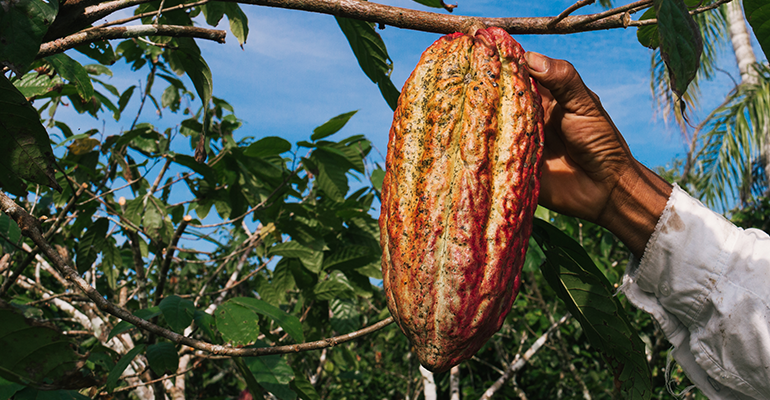 While some farmers have benefited from the renewed interest in local food systems, California's BIPOC farmers are still recovering from closed wholesale accounts and diminished attendance at farmers' markets. A record number of Calfornians are going hungry and yet these small producers are struggling to pivot and meet their needs, with food waste as the result. This is why NGOs, philanthropists and other organizations are stepping in to bridge the gap by marketing and distributing on behalf of BIPOC farmers. This gives them the opportunity to earn a decent wage and enter new markets as well. Get the details at Civil Eats ...

The war on cocoa: Hershey Co. accused of not upholding sustainability efforts in West Africa

The Coffee and Cocoa Council and the Ghana Cocoa board are accusing Hershey of making a "highly unethical" purchase of cocoa beans in the futures market that caused prices to rise by over 30%. Because of this move, West African cocoa regulators say the company can no longer promise its customers that the beans it bought on an exchange were not harvested by children, and they are also threatening to ban the company from implementing its sustainability initiatives within the region. NBC News has the full story.

How the Nature Conservancy, the world’s biggest environmental group, became a dealer of meaningless carbon offsets

Massive payments made to the Nature Conservancy haven't necessarily translated to environmental benefit, according to an analysis from Bloomberg. The nonprofit has worked closely with Exxon, International Paper, Dow Chemical and other big polluters, and it appears to be very loose with its carbon accounting as of late. Scientists, companies and lawmakers have long touted carbon offsets as an easy way for giant corporations to help clean up the atmosphere, but experts say these offsets will need to grow 15-fold before they stand a chance at zeroing out all carbon emissions by 2050.

Is American dietetics a white-bread world? These dietitians think so

The United States is a motley, multicultural nation, but dietetic guidelines still seem to revolve around bland offerings like quinoa and kale. In the wake of racial protests this year, many BIPOC dietitians are speaking out about how it is possible to eat a healthy diet based on foods from a given ethnic cuisine. And this is important work: The Academy of Nutrition and Dietetics is very influential when it comes to setting USDA dietary guidelines that then feed into school lunches and other government programs. The New York Times reports.

Liquid gold: How stronger food systems can start in your toilet

Nitrogen, phosphorous and potassium are all found in human urine, which means this particular excretion could play a part in the future of sustainable farming. Urine that once polluted waterways can be dehydrated and combined with a pH-raising agent to create a pathogen-free, nutrient-rich powder that can be used as fertilizer in large- and small-scale farming operations. Modern Farmer dives into the journey toward nationwide urine reuse programs.