HomeNews[email protected]: Here's why everyone's drinking collagen | Indiana to build largest solar farm in US
Recent
Latest
Podcast: What brands need to get on shelf at Fresh Thyme Market
May 24, 2022
Natural Habitats releases Palm Positive+, A Reference Guide
May 24, 2022
The Planting Hope Company aims to prove gender equity leads to success
May 23, 2022
4 tips to get ahead of chemical concerns in packaging
May 20, 2022
Trending
Whole Foods' honors 30 companies with 10th annual Supplier Awards
May 18, 2022
Getting ready for 2023: Trends for brands to consider
May 17, 2022
Sponsored Content
The rise of sustainable business – eGuide
Sponsored Content
Natural beauty market trends
Jun 16, 2021 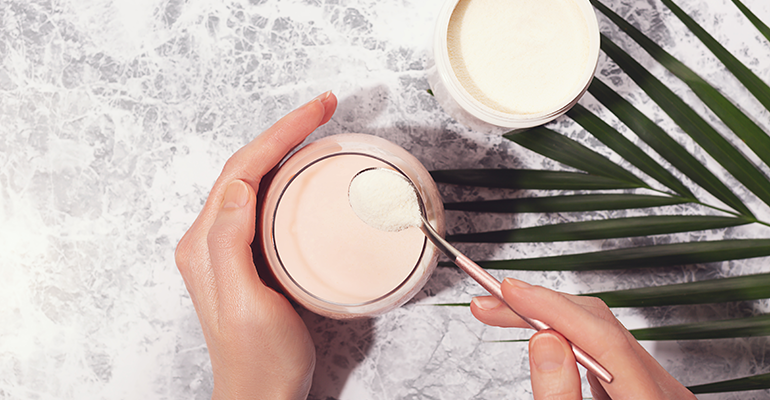 Why is everyone drinking collagen?

It's no secret to members of the natural products industry that functional beverages, particularly those containing collagen, are trending among shoppers. But while collagen is a protein that is hugely important for the human body and plays a crucial role in things like skin elasticity and joint health, studies backing the efficacy of consuming collagen via beverages is both scant and oftentimes funded by Big Collagen. Collagen could have benefits beyond skin elasticity that simply have yet to be studied, but when it comes to ingredients that will have a tangible impact on skin experts widely agree that topicals such as retinoids and high-SPF sunscreens are the way to go. Eater reports.

Sixty Indiana-based landowners with roughly 13,000 acres between them are leasing their property for what will eventually become the largest solar farm in the country. This project, which came about as a result of a partnership between Indiana and Israeli-based Doral Renewables LLC, is expected to bring a roughly $1.5 billion investment into the state over the next five years.  According to plans, the solar farm should be fully up and running by 2024, but will be partially launched in three separate phases before then. There will be about 2.85 million panels across the solar farm—enough to power nearly a quarter-million homes. Indianapolis Star has the scoop.

A new study indicates that local and Indigenous knowledge of crops and climate can make a huge difference in how much there is to eat. It examined local farmers in the Fatick region of poverty-stricken Senegal who have planted a diversity of crops in response to changes in climate and rising temperatures. This meant planting crops with shorter maturing times during drought episodes, and longer season crops when rainfall was once again abundant. “Understanding how they use crop diversity to adapt to climate variations can be the basis of climate change adaptation policies that address local needs and constraints,” the study concludes, per Forbes.

A push in recent years toward more sustainable farming and eating practices led the European Union to recently approve larvae and, now, locusts for human consumption. Reuters writes that the European Commission, which has the power to authorize ingredients including the migratory locusts as human food, stated the locusts could be marketed as a snack or as a food ingredient either in dried or frozen form with wings and legs removed or as  a protein-rich powder. The clearance is under the EU's 1997 novel food regulation, which has led to the approval of algae, new plant proteins and certain foods from other countries; thus far, applications for nine other insects have been submitted.

With aquaponics, growers are charting a self-guided course to community improvement and uplift

Aquaponics is an ancient method of farming fish in a controlled environment that brings together hydroponics (growing plants in water without soil) and aquaculture. It's a great option for urban farmers hoping to find an innovative solution to sustain their communities and combat the socioeconomic barriers that limit their potential. However, aquaponics remains a developing field with few bonafide experts and targeted education programs, making it tough for beginners to get involved. Another hurdle is that growers must have in-depth knowledge of both aquaculture and agriculture at once, essentially managing two very different types of cultivation. Learn more at The Counter.