HomeNewsAd-fail: Taco Bell takes on the Fascist Clown and nobody wins
Recent
Latest
4 tips to get ahead of chemical concerns in packaging
May 20, 2022
7 CBD favorites in the increasingly popular gummies format
May 20, 2022
Mission MightyMe helps parents introduce allergens to babies
May 20, 2022
UNFI's Eric Dorne to step down as chief operating officer
May 20, 2022
Trending
Whole Foods' honors 30 companies with 10th annual Supplier Awards
May 18, 2022
Getting ready for 2023: Trends for brands to consider
May 17, 2022
Sponsored Content
The rise of sustainable business – eGuide
Sponsored Content
Natural beauty market trends
Jun 16, 2021

Ad-fail: Taco Bell takes on the Fascist Clown and nobody wins 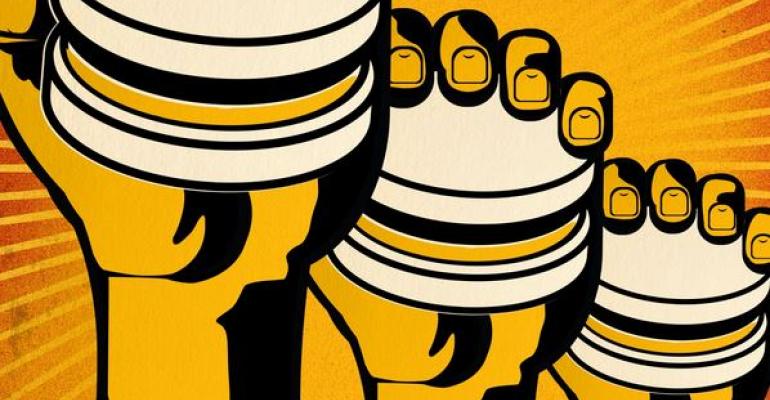 Each week, Rick Polito examines a food/nutrition commercial for accuracy and idiocy. This week: New Taco Bell video turns Ronald McDonald into a dystopian dictator, but is the Crunchwrap really the first step to nutritional freedom?

We don’t remember the breakfast menu from 1984. Sure, Big Brother was watching, but we’re pretty sure he wasn’t manning the drive-through window. And yet, if you haven’t seen Taco Bell’s “Routine Republic” three-minute epic on YouTube, you may have no idea you are living in the culinary equivalent of a totalitarian regime. First they came for my granola, but I didn’t eat granola. Then they came for my flax smoothie...

“Routine Republic” begins with a handsome young man waking up to his low-def TV set announcing “another perfect morning in the Routine Republic, where happiness is eating the same breakfast.” It’s a woman’s voice, but we see a Stalinist clown smiling from the screen. The young man dons his drab gray garb, looking like a male model who got mugged and stripped of his Abercrombie and Fitch duds, and trudges down to a gray prison-yard expanse where he lines up with his similarly dressed comrades to wait for a hockey-puck egg sandwich handed out of a dark window in the gray wall.

The same voice from the TV drones on, “Same breakfast, same routine, same smile,” but now she mixes in “Difference is bad. The hexagon is bad.” We’ve already seen the hexagon painted over a propaganda poster. It’s obviously a mark of defiance, or maybe a geometry lesson. It’s still not clear.

Now our outwardly despondent but secretly rebellious hero exchanges glances with a woman whose big eyes and high cheekbones defy the drab sameness. Freedom is coming! It’s just one value menu away! In the ultimate act of defiance, he throws his hoodie over his head and makes a run for it. Cheekbones and Big Eyes follows him, both chased by a clown army, but the suspense evaporates when we hear the Ramones’ Blitzkrieg Bob.

Nobody ever gets caught during Ramones song. You know that even if you haven't seen “Rock’n’Roll High School.”

When our attractive pair reaches a semblance of the Berlin wall, they rip down another McMuffin poster to expose a hole they crawl through into a sunny field. (In the old days, you needed to sew a balloon together to make a break like that). The clown army shrugs. They lost another customer. The clown dictator seems more peeved.

When the pair finally reach the promised land, a kind of Epcot-isized Renaissance square with the obligatory person of color mingling with 20 or so very attractive white people, another model tosses them a wax-paper-wrapped hexagon. At Taco Bell, they call it a Crunchwrap.

Who knew freedom could taste this good? Who knew the maker of the Waffle Taco could take a stand against totalitarianism ? Who knew Ronald McDonald would look so good as a fascist.

Really, anything would be an improvement after six decades in a yellow jumpsuit.

The last we checked, “Routine Republic” had 800,000-something YouTube views. We wouldn’t be surprised if production costs worked out to $1 per view, but if history hast taught us anything, it’s that freedom has a price.

Still, we wonder, what would George Orwell eat?

Ad-fail: Lunchables as the Scarlet Letter of the lunchroom
Feb 08, 2015