HomeNewsKIND hit with FDA warning letter for ‘healthy’ labeling claims
Recent
Latest
4 tips to get ahead of chemical concerns in packaging
May 20, 2022
7 CBD favorites in the increasingly popular gummies format
May 20, 2022
Mission MightyMe helps parents introduce allergens to babies
May 20, 2022
UNFI's Eric Dorne to step down as chief operating officer
May 20, 2022
Trending
Whole Foods' honors 30 companies with 10th annual Supplier Awards
May 18, 2022
Sponsored Content
The rise of sustainable business – eGuide
Sponsored Content
Getting ready for 2023: Trends for brands to consider
May 17, 2022
Sponsored Content
Debra Stark’s light shines bright on natural products industry
May 10, 2022 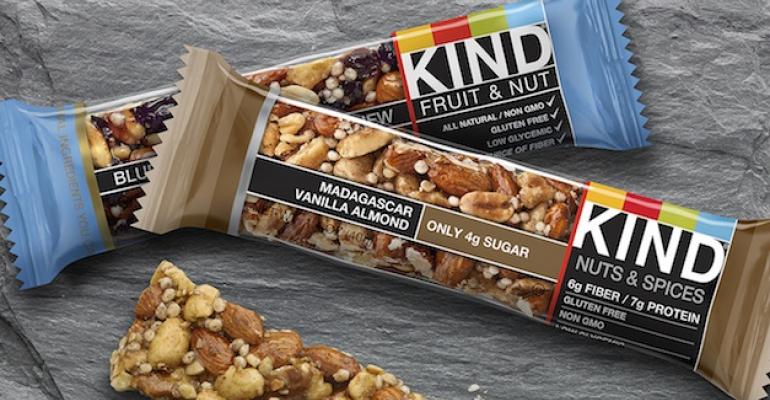 KIND received a warning letter from the FDA citing the conscious company for mislabeling its products as &quot;healthy&quot; even though they contain ample fat. Here, KIND responds, noting that almost all of the fat comes from heart-supportive nuts.

The U.S. Food and Drug Administration sent the maker of whole grain, nut and fruit bars KIND a warning letter dated March 17 (publicly released yesterday), citing KIND for mislabeling at least four of its bars as healthy, according to the FDA’s definition.

According to section 203 of the Federal Food, Drug, and Cosmetic Act “Misbranded Food,” in order for food brands to use the word “healthy” on packaging and promotional materials, a product must not exceed 3 grams of total fat and 1 gram of saturated fat per serving. Additionally, the FDA requires that no more than 15 percent of calories may come from fat in order to qualify as “healthy."

Despite numerous mainstream media headlines that chide KIND for not being “healthy enough," most of KIND’s fat content comes from coconut and nuts—ingredients lauded for heart health benefits.

“Nuts, key ingredients in many of our snacks and one of the things that make fans love our bars, contain nutritious fats that exceed the amount allowed under the FDA's standard,” says Joe Cohen, SVP of Communications at KIND, in a statement. “There is an overwhelming body of scientific evidence supporting that nuts are wholesome and nutritious. This is similar to other foods that do not meet the standard for use of the term healthy, but are generally considered to be good for you like avocados, salmon and eggs."

KIND is fully committed to working alongside the FDA and is moving quickly to comply with its request, Cohen says.

The company plans to update package labeling, but the recipe will not change.

Like the company’s signature see-through packaging, KIND initiated an ultra-transparent response to its wide consumer base. In addition to posting a detailed blog on its website, the brand publicized the warning letter to its social media community, including to over 350,000 Facebook fans. The community response has been overwhelmingly positive, with followers supporting the brand in dozens of comments.

“We’re maintaining an open dialogue with our consumers and we trust they’ll understand that KIND snacks remain a wholesome and nutritious option,” says Cohen.