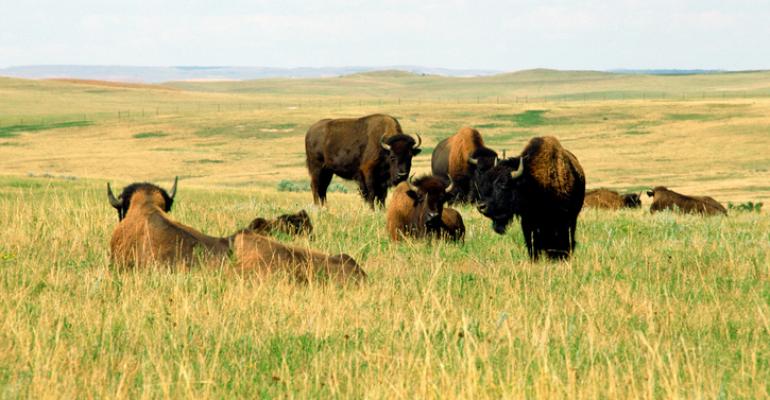 The Savory Institute promotes the importance of livestock in carbon sequestration and brings the controversial message down to the key decision makers: consumers.

"Coal, oil and livestock are blamed for climate change ... how can you blame a resource? It is our management of the resource that is to blame."

– Allan Savory at the Eat It, Wear It, Regenerate It VIP conference in Boulder, October 28th, 2016.

Allan Savory is on a mission to change the way we raise livestock. Not just to make livestock production less polluting, but to harness the profound role these animals play in carbon sequestration. In fact, Savory believes livestock management is the most powerful sequestration opportunity we have, and the foundation of regenerative agriculture. That’s a bold counter to a growing movement that insists that giving up meat is among the most climate-friendly things consumers can do.

Savory's 2013 Ted Talk, which has received over 3.6 million views, is largely philosophical, exploring how he came to his assertion. Now his Savory Institute is working to bring the message to producers and brands as a conduit to consumers. The institute's Eat It, Wear It, Regenerate It conference in Boulder last week—subsequently rebroadcast today in 16 hub events worldwide and through digital access—is the launch of their intended "consumer revolution." Additionally, the institute will be unveiling a "land to market" program next year with a third party seal to go on qualifying product labels, indicating sourcing that is regenerative to the land on which it is produced.

To be sure, food production should be—always should have been—sustainable, especially considering the alternative. But after a few thousand years of an agricultural model that grew increasingly extractive, and 100 years of full-scale degenerative agriculture, sustainability doesn't do the necessary job. It’s time to throw the machine in reverse and make up for damage done. This is regenerative agriculture, and the Savory Institute's brand of it harnesses the power of grazing ruminants like cattle and bison. It's a counter-intuitive message, especially in natural products circles, but a compelling one based on a simple premise: Without livestock grazing and fertilizing grasslands, the grasslands die off in a process known as desertification. Without grasslands we lose the largest carbon sink on the planet. With grasslands exhaling carbon instead of inhaling it… you can see where this is going.

"Coal, oil and livestock are blamed for climate change," Savory said from the stage in Boulder. "Those are all resources—how can you blame a resource? It is our management of the resource that is to blame."

Such a simple reframing that is. Is it our human impulse to externalize blame? Neither fossil fuels nor grazing animals are inherently damaging to our atmosphere. Taking responsibility of improper management is not just a perspective shift, it is a remarkably empowering one. Indeed—at least in the case of livestock—appropriate management becomes an enormous opportunity for corrective action.

Similarly, the practical shift for producers is simple: employing a biomimicry of the lost power of ruminating herds. Simple, but not easy. Even so, if done properly, the benefits of holistic land management are vast. Inputs can be reduced because the animals are increasing (and improving) their own food source by aeration and fertilization. The food source improves because the soil health increases. Healthier soil holds greater amounts of water, making the landscape increasingly immune to both drought and flooding. Healthier soil also packs in the carbon, turning an atmospheric liability into an agricultural asset.

It’s easy to see this model as better than the factory farmed alternative (which Savory unblinkingly condemns as destructive). Where this gets edgy is in the assertion that raising—and therefore eating—meat in this manner is more important and more effective than not eating meat at all.

The specifics of holistic land management are precise, and the timing of herd rotation is critical to success. (Note: grass fed alone does not mean holistic management, nor does rotational grazing.) But the premise is easy: Grazing herds co-evolved with grasslands, and a careful dance with predators kept the herds snugly bunched and actively moving. The dance was shut down as humans eliminated the predators and fenced the prey. The grasslands, whether overgrazed or undergrazed, suffered.

Livestock management is now the only way to effectively emulate this natural process. “We’ve never, ever had it fail,” Savory said from the Boulder stage. “It works, so just use it.”

It works in strokes broad and minute, ecological and economical. “You can get a lot more out of less and have less capital going into inputs on your land, and you're a

ble to generate more ecological wealth,” Collins says. “But also wealth for that rancher who doesn’t have to depend on so much input of petroleum and feed.”

Savory's director of public outreach and events, Chris Kerston, takes it even further, calling the degenerative nature of conventional ranching "circumstantial." With holistic management, we can change the circumstances, he says, “to where ranchers can feel good about healing their land and pay their bills and have something for the next generation and heal these rural communities that don’t have enough jobs—all at once.”

The land to market seal will prototype with close partners, like Epic and Maple Hill Creamery beginning in early 2017, and then will be rolled out to a larger group of brands later in the year.

Calling it “the most exciting iron Epic has in the fire,” Collins says he is excited that the label will allow consumers to identify that the meat they’re eating and the ranchers they’re supporting are going beyond sustainable to really restore and regenerate the land. “It just opens up this dialogue that is very counter-intuitive that consumers are not having yet,” he says. “Even in the natural foods industry we’re not having this conversation yet, which is baffling to me. I think it’s going to completely change how we perceive animal protein and the positive impact of grazing animals correctly.”

The seal is directly linked to outcome-based measurements, Collins says, “where we are collecting data from land, measuring soil carbon matter, biological matter, topsoil. We’re taking measurements on a consistent basis and we’re able to document the enrichment or restoration of that particular soil as it relates to animal grazing.”

The data format has existed for years among Savory partner-producers, and has been fine-tuned as Savory has worked with several prominent universities to identify appropriate metrics for assessing improvement. But, collected for internal decisions, Kerston says, “it rarely left the ranch gate.” The idea to share the information publicly is an effort to “move that down the supply chain to have something results-based that can align with consumers so that they know when they buy something, there’s empirical data to back up that it made the land better.”

The science is all set, then, and they’re already to the point of training auditors. Next comes design, chain of custody and other market-facing items. To get started, prototype partnerships will be those with very short chains of custody, Kerston says. From there they’ll be able to adapt to greater complexity.

Maple Hill, for instance, aggregates from about 100 farms in upstate New York, while Epic buys much of its beef directly from one single Georgia ranch, operated by Savory partner Will Harris.

“So many times in history, with commonly held beliefs in society—and even nutritional recommendations from our own government—we’ve had things completely backwards,” Collins says about opening minds to acceptance of meat as solution. “It’s not that far-fetched to step back and say, ‘what if we have this wrong?’ and start thinking about this a bit differently.”

Collins is most passionate about changing the narrative within the natural foods industry. “So many people, unfortunately, when they talk about meat production, they’re referencing conventional, industrialized CAFO [concentrated animal feeding operations] animal production. It’s redundant and overarching to the point of vegetarian or vegan propaganda.” Collins believes the seal will help consumers identify regenerative, holistic practices “and distinguish that from conventional industrial meat production.”