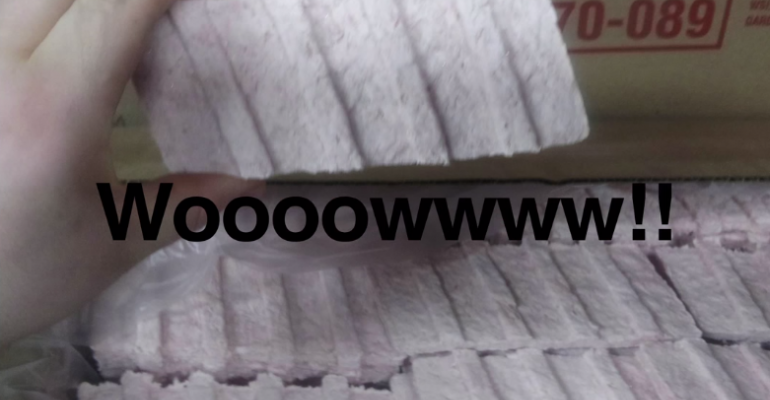 Each week, NBJ Senior Editor Rick Polito examines a food/nutrition commercial for accuracy and idiocy. This week: McDonald&#39;s &quot;Our Food. Your Questions&quot; answer is meant to improve the image, but it&#39;s more hilarious than effective.

I have often told friends that the best 30 minutes of their week could start with typing the words “Treadmill” and “Mishap” in the YouTube search field. But sometimes it takes a multibillion dollar conglomerate face-planting on the treads to turn a “Look at that idiot!” train-wreck fascination into that moment of clarity when you realize how incredibly intelligent and talented you are.

Because no matter how badly behind you are, at work or at home, you did not make the “Our Foods. Your Questions” video McDonald's posted last week.

If you haven’t heard about it, the “Your Questions” series features former Mythbusters star Grant Imahara touring McDonald's facilities to answer questions about McDonald's menu offerings. From concept to execution, it’s the sort of campaign that inspires a national eye-rolling shoulder slump. The Christian Science Monitor headline sums it up well: “Former ‘Mythbusters’ cast member Grant Imahara is now appearing in McDonald's commercials explaining ‘pink slime.’ How Do I explain that to my 10-year-old son?”

We suppose you could explain that Imahara got dropped from the show in August, right before you explain the concept of “mortgage payments.”

So expectations are not high, but the McRib video drags the campaign off the rails and into the “Is this an SNL spoof?” abyss. It begins with Virginia high school teacher Wes Bellamy sporting a bow-tie and talking about a tweet pic of a frozen McRib patty looking much like the sole of a bleached Croc. He describes the image as “disgusting.” So McDonalds invited Bellamy and Imahara to Oklahoma City supplier Lopez Foods to see the McRib in production. Yes. Bellamy won an all-expenses-paid trip to Oklahoma City!

He seems genuinely excited to be in Oklahoma City, a sentiment perhaps rare in a metropolitan area that can barely claim "not as bad as Tulsa" status, but takes his quest for truth seriously. “I don’t know yet, but I am a skeptic,” he announces outside Lopez Foods.

We know, Wes. We could tell by the bow tie.

Imahara assures him that he shares his concerns, repeating the video series’ catch phrase: “McDonalds knows you have a lot of questions about your food, so they asked me to find the answers.” Thanks, Grant.  We always knew it would take somebody on the McDonalds payroll to get to the bottom of this.

Inside the facility, Bellamy and Imahara meet the McRib factory vice president Kevin Nanke, a balding middle-aged guy wearing the short sleeved button down shirt from the Sears Guys Who Drink Lite Beer and Coach Softball collection.  Nanke shows them a “boneless pork picnic,” which we think is a pork shoulder (we had to Google it). He ushers them through the hairnets-and-lab-coats airlock into the grinding machinery of a meat facility that is gleaming clean but still triggers that “Things we don’t really want to think about when we eat meat” cringe.  “This is pretty cool. I’ve got to admit. It’s not what I thought it would be,” Bellamy observes, cheerfully.

He is obviously not watching the same slaughterhouse slasher flicks we grew up on.

Against this nightmare whir of slicing stainless steel blades, Nanke reveals the elegant simplicity of the McRib recipe: “Pork, water, salt, dextrose - which is a kind of sugar - and preservatives,” he says, reassuring Bellamy that  “the preservatives are used to lock in the favor all the way into the restaurant!”

“Oh, so that’s how you keep it tasting like my grandmother’s barbecue?” Bellamy exclaims through his beard net (yeah, they have those).

“We’re following a recipe just like she does at home,” Nanke responds.

Imahara follows up with “Wes, your grandma makes a McRIb? Because if so, I want to taste that!”

And then comes the laughter, as canned as the preservatives Nanke loves. Just three guys in lab coats, yucking it up in a giant meat grinding complex.

See. Right there. That’s where the piece goes off message, lurching into “Really? Somebody got paid to come up with this?” territory.

And it just keeps getting better (or worse, if you are the McDonald's marketing executive scrolling through the YouTube comments that include phrases like “soggy wet cardboard” and “liquid meat”). Nanke takes Bellamy behind the antibacterial curtain to “see where we’re forming the McRib in the iconic form that resembles a rack of ribs.”

Holding one such iconic slab,  that still looks like that bleached Croc, Bellamy observes “I just thought it was some weird shape.”

Wes! It is a weird shape!

Then we meet the “food safety and regulatory technician” (does your grandma have one of those, Wes?) and we see Bellamy’s first chance to eat a McRib, in Nanke’s words, as “a complete build.”

Bellamy leaves the Oklohoma facility satisfied. “All of my questions have been answered,” he announces.  But he found more than answers on his visit. He found a new friend, really more than a friend, a sacred bond, as Imhara explains. “You know what we are now? We’re McRib buddies!”

Yes, he says that, and, as of this afternoon, 1.8 million YouTube viewers heard him say that.

So spray down your treadmill with bacon grease and take a sprint in fuzzy bedroom slippers.

You can’t possibly take a fall as bad as McDonalds and Imahara did last week.