Schools fight for sustainability, one lunch plate at a time 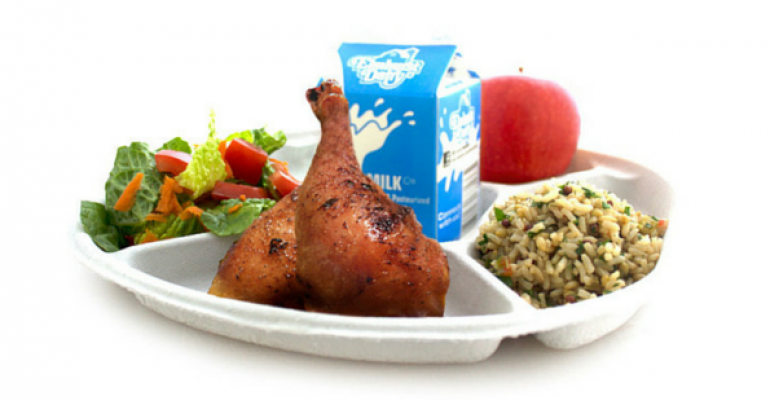 The Urban School Food Alliance has transitioned six of the largest school districts in the country to compostable lunch plates, preventing 2.5 million plastic plates a day from going to landfills.

2.5 million. That’s how many lunches are served every day by six of the largest school districts in the country—and that’s how many plastic plates are no longer heading straight to the landfill on a daily basis, thanks to the efforts of The Urban School Food Alliance.

In 2012, school administrators in Los Angeles, New York City, Orlando, Chicago, Dallas and Miami joined forces to form the Urban School Food Alliance. This past May, they launched one of their most significant ventures yet: Getting rid of plastic lunch trays in favor of compostable lunch plates at 4,536 schools throughout the United States.

As Maanvi Singh at NPR writes, “The polystyrene used in traditional lunch trays is a petroleum-based plastic that won’t break down for hundreds of years. When the trays end up in landfills—and 225 million of them do every year—they leech pollutants into the water and air.”

These new compostable plates are instead made of recycled newsprint, allowing them to easily break down within weeks in a commercial composting facility. And they’re only a fraction more expensive—$0.009 extra apiece, compared to conventional plastic trays. That’s a small price to pay to relieve landfills of such a major burden.

Another bonus? These new paper lunch plates are actually easier for kids to hold than the plastic trays. And because all of a child’s lunch waste can go into one bin, there’s less contamination involved in the process.

Eric Goldstein, Chairman of the Urban School Food Alliance, states that while he hopes the new plates will help teach school children about renewable resources, he also hopes this initiative will pressure cities to develop better composting facilities. As it stands right now, not every school’s city can successfully compost the new paper plates just yet. Although New York and Los Angeles have municipal composting services, the other four cities in the alliance do not; nor do they have biodigestors, which turn compostable waste into natural gas.

To deal with this problem, the alliance school districts without city composting services are turning to other ideas. The Miami-Dade School District is developing “in-house compost labs” connected to organic gardens at specific schools. Meanwhile, Chicago has received grants to start a composting pilot program at five of their schools.

In order to justify long-term composting facilities in these cities, there must first be a steady stream of compostable waste being created. This new school lunch plate initiative might be just the ticket to move the needle—especially since composting is cheaper for cities, only costing around $20 per ton, compared to the $50-$100 per ton it costs to send trash to a landfill.

So what’s next? The Urban School Food Alliance is now on its way to transitioning schools to compostable utensils, says Goldstein.

If this is what it looks like when just six of the nation’s school districts start making efforts toward a more sustainable future, can you imagine what a dozen or more would accomplish?