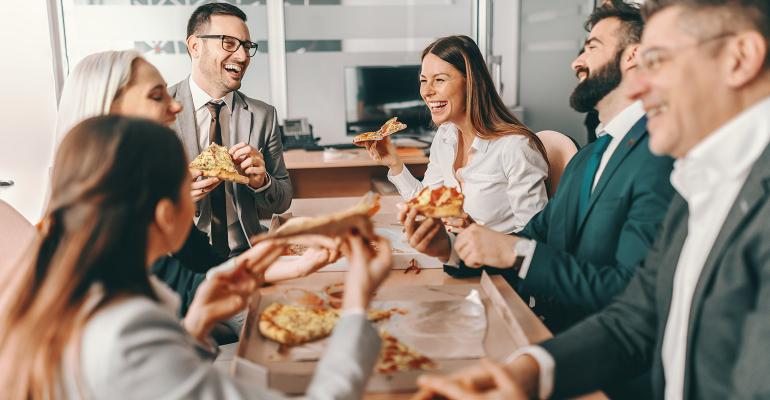 More than half of working adults in the United States have trouble eating a healthy lunch at work, and that affects how they eat outside of work, according to a new survey.

Of the 907 people who said they typically eat lunch at work, 56% said they struggle to eat a healthy lunch. More than three-quarters (77%) said they're more likely to make healthier decisions at other times of the day if they eat healthy at lunch..

The American Heart Association and Aramark commissioned the survey, which was conducted by The Harris Poll, as part of their joint initiative, Healthy for Life 20 By 20.

“Understanding what employees are eating for lunch on a typical workday and what factors influence their choices helps us develop strategies to improve dietary intake with multi-level approaches through food systems, communities and individuals,” said Dr. Anne Thorndike, vice chair of the American Heart Association's Nutrition Committee.

The survey of employed U.S. adults who typically eat lunch during work hours found that 91% are interested in improving the healthfulness of their typical workday lunch.

Further, 79% of those who eat lunch at work said that when they eat a healthy lunch, they are more likely to make healthier decisions through the day.

“The finding that healthier food choices at work may impact food choices throughout the rest of the day presents a unique opportunity for the workplace to have a positive influence on not only the employee's health but also the health of the employee's family,” said Thorndike, who has a masters degree in public health and is an associate professor at Harvard Medical School.

But they need some help to do so. More than two-thirds value their employer’s assistance in becoming healthier, and 82% said it’s important to have healthy food options at work. Of those under 40, 72% said healthy life tips such as how to prepare healthy lunches would help them eat more-healthy lunches.

Nearly half said that conflicting messages about nutrition confuse them, the survey found.

“Through this survey, and as part of extensive consumer insights gained throughout our Healthy for Life 20 By 20 initiative, consumers are emphasizing that health and wellness is top of mind every day,” said Dan Wainfan, vice president of brand health, wellness and nutrition at Aramark. “While they don't always make a healthy choice, they always want delicious, healthy choices available—at work and at home.” 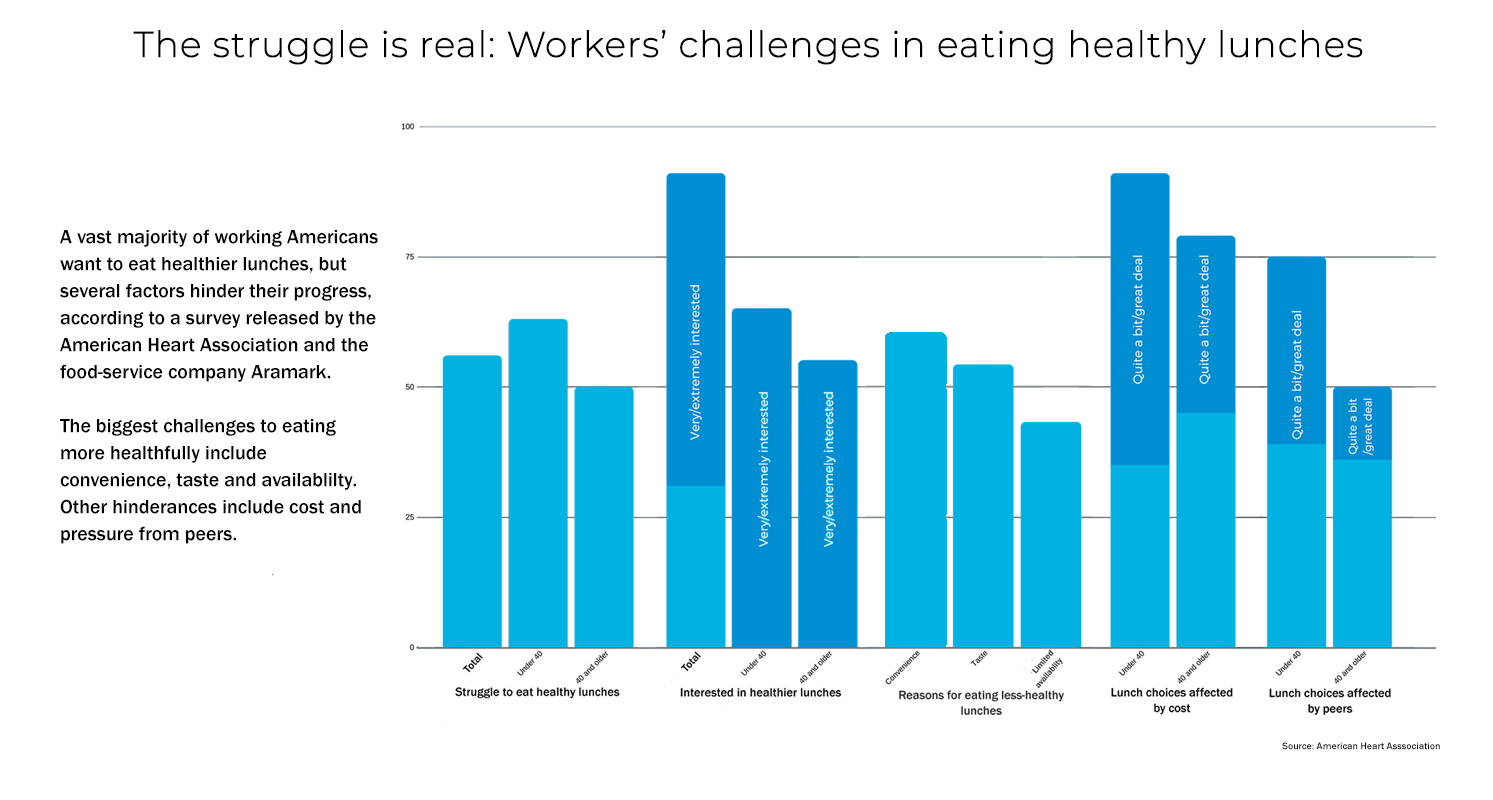 Challenges to eating a healthy lunch

Employees who eat lunch during work hours said convenience, taste and availability have “a great deal or quite a bit” of effect on their lunch choices, but cost, peers’ choices and stress also play a role, according to the survey.

A majority of employees said convenience (60%) and taste preference (54%) have a great deal or quite a bit of impact on their choosing unhealthy lunches. Only 43% said limited availability of healthy food had the same effect.

“Improving the nutrition content and reducing calories of classic favorites and typically indulgent menu items helps. Having more plant-based options to choose from at home and on menus helps. But in the end, people still need to choose to eat healthier food. The good news is most people said they are interested in doing better,” Thorndike said.

The cost of eating healthy lunches was a factor for 91% of employees under 40 years old and for 79% of those 40 and older. Similarly, their peers’ choices affected younger employees’ choices 75% of the time, compared with 50% for older workers.

Aramark has launched a major plant-forward initiative to boost nutrition across its menus in colleges and universities, hospital cafés and workplaces. The initiative has resulted in a 15% average reduction in calories, saturated fat and sodium, and significant increases in fruits, vegetables and whole grains in those menus.

About six in 10 employed adults have an on-site cafeteria, food service or vending machine at their workplaces. Adults under 40 are more likely to work at such places than those who are 40 and older, 70% to 50%. Of employees whose workplace offers access to food, 79% obtain food there at least some of the time.

However, 86% of employees bring their lunches from home at least some of the time. Women are more likely than men to make their lunch at home (91%), as are employees under 40 (90%).

Stress also prompts many employees to eat less-healthy lunches and snacks. Forty-one percent of those who eat lunch at work said they eat less-healthy food—comfort food and unhealthy snacking—on stressful days, with 40% of women and 32% of men admitting such. Employees under 40 are more likely than their older colleagues, 47% to 35%, to make less-healthy choices.

Less than one-third of the stressed workers use healthy coping techniques use alternative relief methods such as talking to a friend or colleague (32%), engage in physical activity (26%) or deep-breathing/meditation exercises (18%) during the workday.