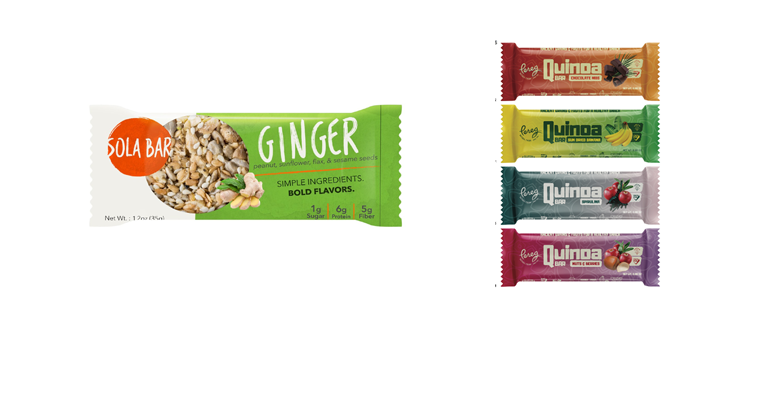 Sola Snacks announced via press release the addition of ginger to its line of take-anywhere, eat-anytime snack and meal bars that blend wholesome nuts, seeds, herbs and spices for a savory crunchy experience. Ginger Sola Bars are sharp, peppery and gingery.

Lonza said it has completed its acquisition of Capsugel, which creates a leading integrated solutions provider for the biopharmaceutical and consumer health and nutrition industries. Capsugel’s business will continue to operate in its existing structure until the full integration has been completed. With the acquisition of Capsugel, Lonza adds a trusted brand with a large breadth of technologies that it believes will expand the market reach of both companies’ contract development and manufacturing organization (CDMO) and products businesses. It also supports Lonza’s strategic ambition of getting closer to the patient and end consumer.

Ancient grain and spice specialists Pereg Natural Foods debuts new Raw Bars and Quinoa Bars with no refined sugar or corn syrup, and no more than six natural ingredients, according to a press release. Pereg bars are individually wrapped, and sold individually and in six-pack boxes. Raw Bars are made only from raw ingredients, fruits, and nuts, and come in four varieties: Cherry & Coconut, Peanuts & Dates, Cocoa Nibs and Matcha & Almonds. Quinoa Bars are made with quinoa, fruits, and nuts, and come in four varieties: Sundried Bananas, Nuts & Berries, Spirulina and Cocoa Nibs. They are kosher certified, dairy and lactose-free, certified gluten-free and non-GMO.

Firmenich said it continues to make significant progress in renewable energy adoption, with more than 65 percent of its manufacturing electricity generated from renewable sources globally. With two new plants, Princeton and Port Newark, powered 100 percent by renewable electricity, Firmenich now operates a total of seven 100 percent clean energy manufacturing sites, including two in the UK, two in Switzerland and one in Belgium.

Mark Rampolla, founder of ZICO Coconut Water and partner of Powerplant Ventures, has joined Beanfield Snacks as CEO. In this new role, Rampolla will focus on growing the company while also accelerating the revenue, equity and job creation partnership that the company created with local Los Angeles non-profit, Homeboy Industries. He will not be taking compensation for this role, he said in a statement.