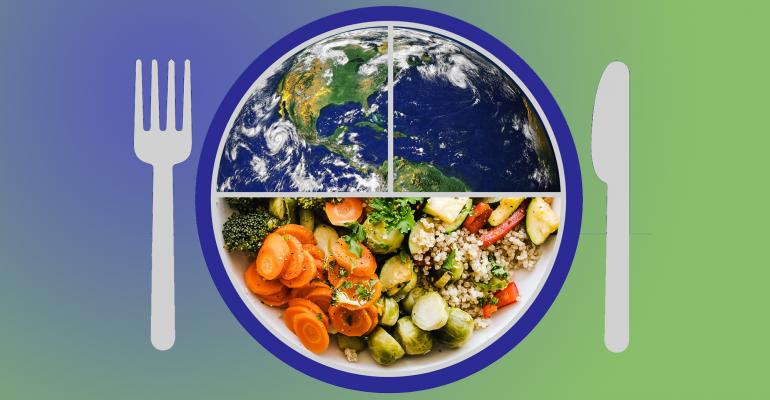 Start Slideshow ›
Americans' willingness to change their diets to help the environment depends in part on their concerns about climate change and their incomes.

The modern food system generates as much as 30% of the greenhouse gases causing global warming, but if more Americans changed to plant-based diets, those emissions would decrease.

Unfortunately, many Americans don't know how what they eat contributes to the climate change that is causing extreme weather events such as stronger hurricanes, more intense floods, increased drought and larger, hotter wildfires, found researchers from the Yale Program on Climate Change Communication and the Earth Day Network.

Related: To tackle climate change, we need to rethink our food system

More than half of Americans surveyed said they would be willing to eat more plant-based proteins or less red meat, and nearly half said they would consumer dairy alternatives. But they are concerned about the cost and taste of those foods, as well as their ability to conveniently purchase them.

Livestock production is the leading agricultural contributor to greenhouse gas emissions, while fruits and vegetables creates the lowest levels, according to a 2018 study cited in the Yale report.

Related: Why collaboration and iteration are the keys to climate activism

These results show that American consumers need more information about the effects of their diet on global warming, as well as lessons on what plant-based foods to purchase and how to cook them. Natural products brands and retailers have a tremendous opportunity to educate consumers on these issues.

The federal poverty level for a family of four in 2020 is $26,200. Someone working a full-time, minimum-wage job would not make that much in a year unless they worked in Washington state, the District of Columbia or New York City, New York, which have minimum wages of $13.50, $14 and $15 per hour, respectively, according to the federal Department of Labor. Minimum wages of between $12 and $13 per hour—$24,960-$27,040 annually—are the law in Arizona, Colorado, Maine, Massachusetts and California (for small businesses only). The federal minimum wage of $7.25 an hour—$15,080 a year—prevails in 21 states.

Earth Day Network funded the study as part of its 50th anniversary of Earth Day commemoration.

To learn more about the study, "Climate Change and the American Diet," click through the slide show.

CEO climate leadership is urgently needed to save our planet
Dec 03, 2019

Retailers can differentiate by taking steps to mitigate climate change
May 26, 2017