Why natural products businesses are paying the Shuumi Land Tax 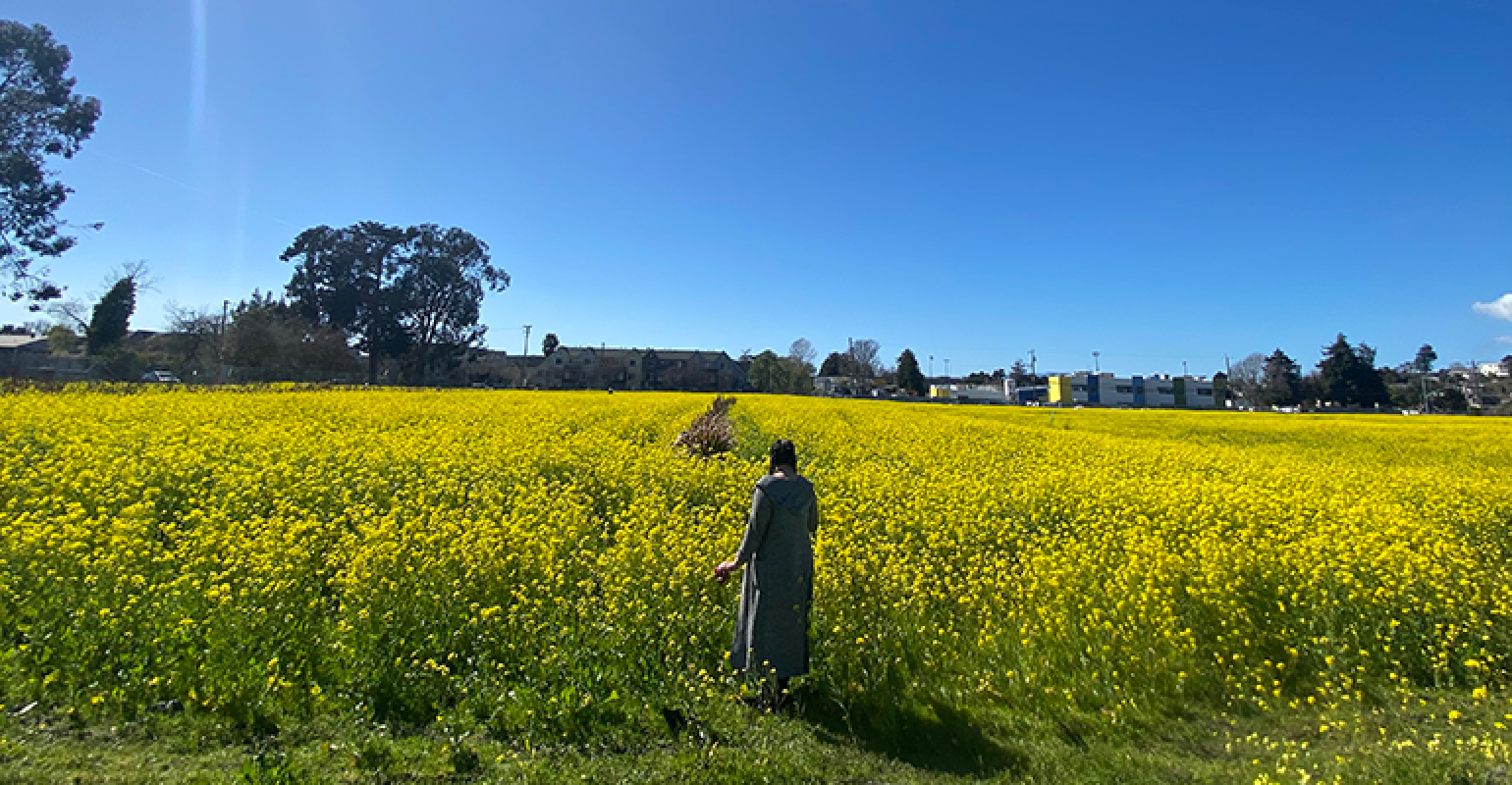 San Francisco’s Bay Area is known for its food, its fertile land and its famous restaurants.

Before the Bay Area became what it is today, the land belonged for thousands of years to the Ohlone Indigenous people, which were not a single tribe but a collection of Indigenous groups each with their own languages and customs. Over the past two centuries, genocide and colonialization took much of that away with an estimated 16,000 Native Californians massacred in the 1800s.

Today, nearly 200 tribes call California home, according to Bay Area Equity Atlas, and the Bay Area has one of the largest populations of intertribal American Indians in the United States with 18,500 members and growing.

Despite its long history, many people have no idea the Lisjan Ohlone, one of the many Ohlone tribes, exists in California.

The Sogorea Te’ Land Trust, an Indigenous, women-led cooperative in the San Francisco Bay Area, is trying to change that through rematriation—restoring Indigenous land to the intertribal indigenous community. 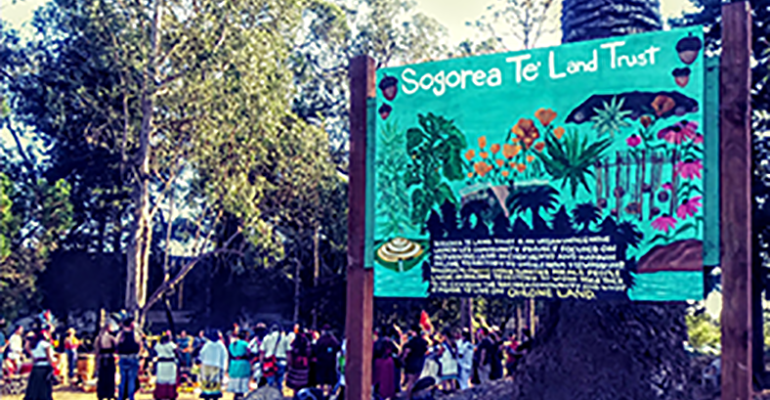 Urban farming is done using leased land that also serves as space for ceremonies and showcases ancestral practices such as weaving tule and prescribed burning to bring back native plants. Besides growing organic fruits and vegetables, the land trust grows plants significant to Indigenous cultures including mugwort and soap root.

Currently, the Sogorea Te’ Land Trust stewards three different properties, each with its own agreement. 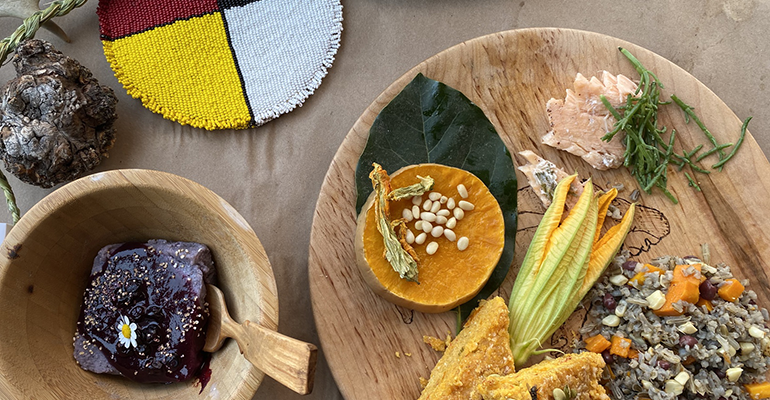 In East Oakland there’s a traditional village site on a quarter acre of land, called Lisjan, that was gifted to Sogorea Te’ Land Trust by Planting Justice, a social justice organization focused on food sovereignty through urban farming jobs to help people affected by social inequities and mass incarceration. Luckey says Planting Justice intends to give current land they are farming, as well as one and three-quarters additional acres to the Sogorea Te’ Land Trust, once the mortgage is paid off.

The space includes a Himmetka emergency response hub that includes gardens used for growing food and medicine, a rain water catchment system with 5,500 gallons of potable water storage, first-aid supplies, a seed saving library, a ceremonial space and other resources. In the long term the land trust hopes to create three more emergency response hubs in the Bay Area.

“Connecting with the land is healing for everybody,” says Johnella LaRose, Co-Founder and Director of Sogorea Te’ Land Trust. “It’s not just, ‘Oh we’re Native people, we’re close to the land, we have this spiritual connection: Everybody has a spiritual connection, but it’s been lost.”

To make that dream a reality takes money.

That’s why the Sogorea Te’ Land Trust is asking for voluntary annual contributions to the Shuumi Land Tax by non-Indigenous people who live within the traditional Lisjan Ohlone territory which includes Oakland, Berkeley, Alameda, Piedmont, Emeryville and Albany, California. An online calculator gives a suggested amount that an individual or business should pay.

“The word shuumi means gift because it invites people to take the first step in practicing rematriation,” says Nazshonnii Brown-Almaweri, a staff member of Sogorea Te’ Land Trust. “It’s a way to make sure that everyone has a part in this healing that we are doing for our community and as well as the earth.”

Now some natural food business owners are getting involved.

Why businesses are paying the Shuumi Land Tax

Sana Javeri Kadri, founder and CEO of Diaspora Co., the direct trade, single-origin spice company, first heard about the Sogorea Te’ Land Trust from a roommate in 2018. She thought the work they were doing was “really cool” and paid her personal tax. A year later, she calculated an institutional tax to be paid on behalf of her business.

“I remember feeling like it was a really high number and feeling a bit scared of it,” Kadri says.  “I knew I should do it but it was money that I didn’t have because money is tight as a business since we weren't profitable yet. But it stayed at the back of my mind because this is amazing work, it is the work of reparations.”

“We all talk about decolonization in these metaphorical abstract ways, but here’s a really powerful, tangible way to support that work,” says Kadri, whose company, Diaspora Co., donated $250 in 2019 and $3,149.83 in 2020 to the Sogorea Te' Land Trust.

At first, Kadri tried to set up a donation drive to get her customers to pay Shuumi Land Tax to help Sogorea Te’ Land Trust.

“We found that there was very little support around it,” she says. “Our customers didn’t understand why we were doing it or why it was important.”

In 2020 Kadri decided to tie paying their Institutional Shuumi Land Tax on behalf of Diaspora Co. to Thanksgiving and shared it in an Instagram post.

“As an immigrant here, Thanksgiving never sat right with me,” says Kadri, who grew up in Mumbai, India. “I didn’t grow up with the childhood attachment to the holiday. And for me it was, ‘This is really weird, y’all are celebrating genocide.’”

It was a welcome change, Kadri says, to reframe the meaning of Thanksgiving, especially since her company is focused on rebuilding a system in India that was harmed by colonialism.

“The natural food industry has only gone so far as to say, we’re natural,” she says. “That’s a very short yardstick and we still have a long way to go.”

Kadri suggests more brands need to be political and take positions that they believe are right to garner support.

“There is this idea that being political is somehow not good for business,” Kadri says. “And I think that’s a very privileged, out-of-touch approach.”

After seeing, Kadri’s Instagram post, Sadie Scheffer, CEO of Bread SRSLY, which is based in Berkeley, California, paid $291.11 for its 2020 Institutional Shuumi Land Tax based off the company’s annual profit.

“Sana is a real inspiration,” Scheffer says. “I’ve learned from her and following her example. For Bread SRSLY, we talk about our role as a business and conventional wisdom around capitalism that everything is for profit and we don’t owe anyone anything. That’s not the model we are trying to follow. It doesn’t align with our values as a business.”

Instead, Scheffer says it’s important for her company, and others, to be an active participant in the community’s wellbeing and by advancing justice for Black, Indigenous and People of Color (BIPOC).

Last year, Bread SRSLY employees launched a Culture, Inclusion, and Community Club to create “a more psychologically safe workplace for all staff” and to honor and amplify BIPOC voices to help marginalized groups.

That’s when Bread SRSLY turned its attention to its manufacturing facility in Berkeley, California, which operates on land that rightfully belongs to the Lisjan Ohlone Indigenous people.

“Bread SRSLY isn’t just a product of hard work, it’s a product of a lot of privilege including the land that it is on, that was stolen,” Scheffer says. “I don’t think it’s significant that we gave money. It’s significant that we‘re having a conversation. We’ve made a commitment to pay our land tax moving forward. But this isn’t an offset for the land we are using, this is a way to be an active participant and improve where we are.”