What do oysters in New York Harbor, school children in Longmont, Colorado, and maize farmers in Rwanda have in common? Each benefitted significantly in 2014 from a generous, uniquely structured giving strategy that has been part of Whole Foods Marketâ€™s DNA since its infancy.

â€œServing and supporting our local and global communities has been a core value for many years,â€ says company co-CEO Walter Robb. â€œWe are grateful to our customers for their support of our business, which helps to enable the many donations we make every day to food banks, shelters and a wide array of non-profit organizations in addition to the charitable work we do through our Whole Planet, Whole Kids, and Whole Cities foundations.â€

As far back as 1985, when the fledgling, Austin, Texas-based natural foods purveyor drafted its mission statement, it vowed to give 5 percent of after-tax profit to charity. Two decades later, as the companyâ€™s revenues have shot past $14 billion, it has kept that philanthropic promise even in the face of criticism from some economists who suggested it was giving away too much money. 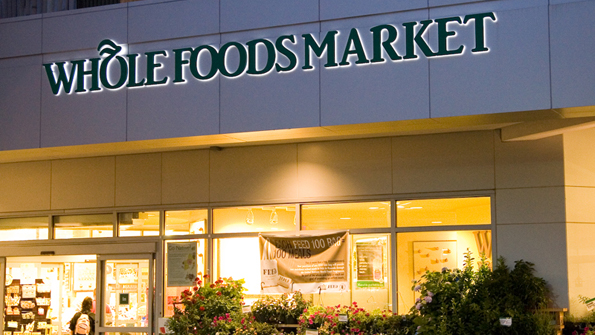 In addition to donating to community-based nonprofits around the country, the company also covered the operating expenses of its three independent spin-off nonprofitsâ€”the Whole Planet Foundation, Whole Cities Foundation, and Whole Kids Foundationâ€”enabling each to use 100 percent of public donations for program support.

Key to the companyâ€™s charitable giving is a focus on hyper-local causes. Rather than choosing beneficiaries at the corporate level, it enables each of its 400 stores (which collectively draw 7.7 million customers per week) to hold â€œ5 percent daysâ€ several times a year, choosing a local cause to receive 5 percent of all proceeds from that day.

On November 19, the fundraiser enabled Colorado Friendshipâ€”a nonprofit that provides backpacks full of healthy food for low-income children to take home on the weekendâ€”to raise $17,119 in one day via sales at four Colorado Whole Foods. â€œThat allows us to take on about 75 more children for a full school year,â€ says Liz Friedenson, the programâ€™s executive director. â€œWe were very excited.â€

Across the country, a recent â€œ5 percent dayâ€ between seven New York City stores enabled the nonprofit Billion Oyster Project to raise $68,000 to help restore the New York Harbor ecosystem via the planting of long-depleted oysters. The project is run by a marine-biology-focused high school called the New York Harbor School. The money will go to support the schoolâ€™s on-site oyster hatchery, pay staff, and fund boats and scuba gear for students to use to plant oysters on the ocean floor.

â€œIt is a huge amount of money with very little work required on our part,â€ says Samuel Janis, project manager. â€œAs far as charitable donations go, it is a really sweet deal.â€

Whole Foods also lends a hand in global giving, with its Whole Planet Foundation facilitating $60 million in donor-funded grants for 116 microloan projects in 61 countries. More than 800,000 recipients, most of them female entrepreneurs supporting a family, received microloans for everything from poultry and pig farming to handicrafts businesses.

The companyâ€™s leaders personally walk their philanthropic talk. In 2009, co-founder John Mackey made headlines when he donated his own pay, totaling $379,636, according to Inc.com, to the animal welfare nonprofit the Global Animal Partnership.

In 2005, Mackey famously took on Nobel Prize-winning economist Milton Friedman in an online debate (still posted on the Whole Foodsâ€™ blog) about philanthropy. Friedman had long argued that the â€œone and only oneâ€ social responsibility of business is to â€œincrease its profitsâ€ and that the job of a CEO is to â€œhelp shareholders make more money.â€

Â â€œI strongly disagree,â€ Mackey said during the debate. â€œIâ€™m a businessman and a free-market libertarian, but I believe that the enlightened corporation should try to create value for all of its constituencies,â€ including customers, employees, suppliers, and the community. He went on to call on corporate America, which at the time was, as Mackey put it, â€œwidely seen as selfish, greedy, and uncaringâ€ to embrace the â€œnew form of capitalismâ€ Whole Foods had laid out.

A decade later, many have heeded that call. In Mackeyâ€™s recent New York Times bestseller â€œConscious Capitalism: Liberating The Heroic Spirit of Business,â€ he tells the stories of numerous companies, including Southwest Airlines and Google, which have embraced a more socially conscious corporate philosophy.Â

For Whole Foods, the strategy appears to be working on many fronts. In the fourth quarter of 2014, sales were up 9 percent over the previous year, and the company returned $44 million to shareholders.

As Mackey has long suggested, doing the right thing can pay.

In 2014, it contributed a million dollars to charity, often focusing on small, bootstrap organizations able to demonstrate that donations go to direct aid, rather than marketing or salaries. Beneficiaries have included autistic adults in the United States, lepers in India, and flood victims in the Balkans. NOW has also been a key contributor of free supplements for undernourished children and pregnant women. And the company matches employeesâ€™ charitable donations 100 percent.