HomeMarket Data and AnalysisGlobal organic growth: The good news story
Recent
Latest
4 tips to get ahead of chemical concerns in packaging
May 20, 2022
7 CBD favorites in the increasingly popular gummies format
May 20, 2022
Mission MightyMe helps parents introduce allergens to babies
May 20, 2022
UNFI's Eric Dorne to step down as chief operating officer
May 20, 2022
Trending
Whole Foods' honors 30 companies with 10th annual Supplier Awards
May 18, 2022
Sponsored Content
The rise of sustainable business – eGuide
Sponsored Content
Getting ready for 2023: Trends for brands to consider
May 17, 2022
Sponsored Content
Unboxed: 7 plant-forward ice creams to stock this summer
May 10, 2022 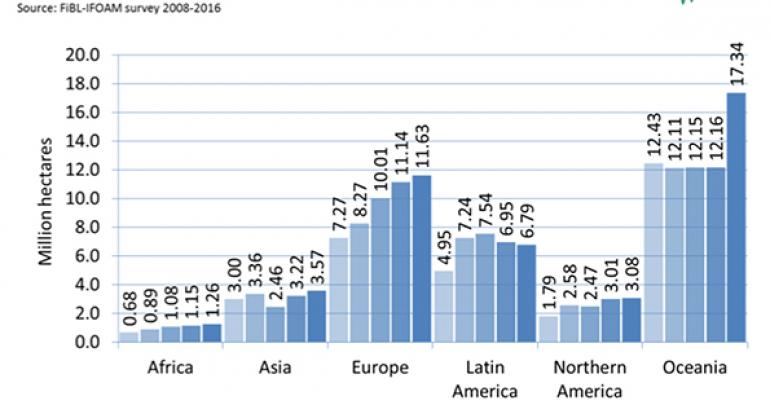 “The World of Organic Agriculture” contains the latest information of the organic sector. It is published every year by the Research Center for Organic Agriculture in Switzerland (FiBL) and IFOAM Organics International, the global umbrella body for the organic sector. Some of the highlights from the data collected for third-party certified and Participatory Guarantee Systems (PGS) organic agriculture from 172 countries in 2014 show the following points.

The global organic market is growing

The market research company Organic Monitor estimates the global market for organic food in 2014 to have reached $80 billion. The market has been steadily increasing from its $15.2 billion in 1999. The United States is the leading market with $30.4 billion, followed by Germany $8.8 billion, France with $5.4 billion and China with $4.1 billion. In 2014, the Swedish organic market experienced an unprecedented growth, increasing by more than 40 percent--a remarkable rate for an already well-established market. 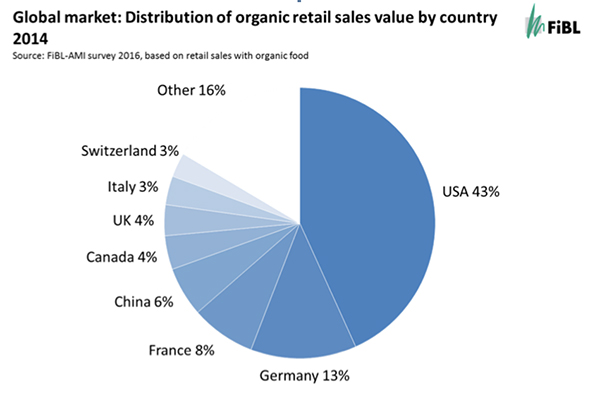 A total of 108 million acres were organically managed at the end of 2014, representing a growth of almost 1.235 million acres on the previous survey (2013 data). There were 27 million acres of certified organic land in 1999. Australia is the country with the largest organic agricultural area with 42.5 million acres, followed by Argentina with 7.7 million acres and the United States of America with 5.4 million acres. 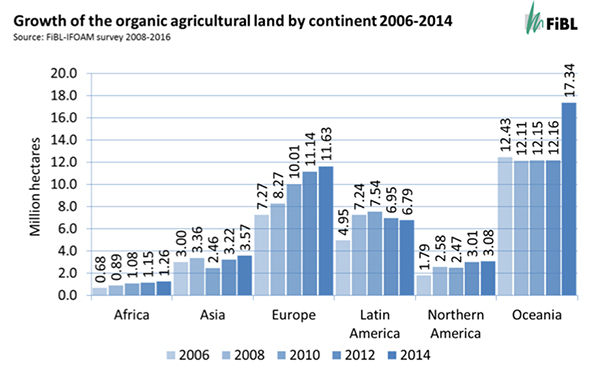 IFOAM Organics International works with farmers, governments, the United Nations, the private sector, consumers, researchers and all the stakeholders in the organic sector to assist the growth and uptake. There is enormous support for organic production and products, and this continues to grow on every level. IFOAM Organics International is engaging in a process called Organic 3.0 to develop the next phase of the organic sector.

Organic 1.0 was started by our numerous pioneers, who observed the problems with the direction that agriculture was taking at the end of the 19th century and the beginning of the 20th century and saw the need for a radical change.

Organic 2.0 started in the 1970s when the writings and agricultural systems developed by our pioneers were codified into standards and then later into legally-mandated regulatory systems.

Organic 3.0 is about bringing organic out of its current niche into the mainstream and positioning organic systems as part of the multiple solutions needed to solve the tremendous challenges faced by our planet and our species.

The idea of Organic 3.0 is resonating with stakeholders around the world. More information is available from our website.