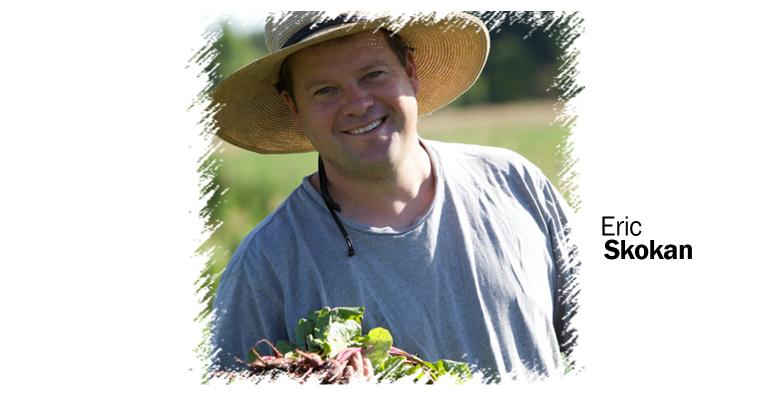 Chef Eric Skokan runs Black Cat Bistro and Bramble & Hare, a pair of Boulder, Colorado, farm-to-table restaurants supplied by nearby Black Cat Farm. A newly minted USDA Organic farm verification makes Black Cat the only certified organic farm-to-table joint in the United States. Skokan speaks here about running a successful locavore restaurant, the importance of bravery and what Colorado farms do well … and not so well.

How did Black Cat get its start and why the push for organic certification?

Eric Skokan: My wife Jill and I opened the Black Cat 10 years ago. The idea was to have a small restaurant where the food, on a nightly basis, reflected the community and the region where we came from. Before locavores were locavores, that was the mission of the restaurant. I started gardening before opening the restaurant as a way to produce some of the herbs and flowers and garnishes to finish dishes with. Before I knew it, I had leased farmland from Boulder County Open Space and purchased a tractor and went down this slippery slope of an ever-increasing garden size that turned into a small farm. Fast forward and we’re at 130 acres. I bought a combine to harvest all the farro and wheat for the bread we’ll serve for the next year.

It turns out that running two restaurants, a farm and having four kids is a lot to do. On top of that list is the work of compiling paperwork and building the record-keeping systems for the organic certification. We’ve always been committed to the practices and not necessarily the paperwork, but now we have the systems built.

The real benefit in organic certification is for brand new customers. Jill and I have been here for a long time, and we’ve built a reputation with the people who know us. But as the restaurant grows and has more of a regional footprint—for example, we just started selling vegetables at the Union Station Farmers Market—there’s no reason to expect new customers to understand our level of integrity. For those new customers, organic certification is the gold standard.

How does farm-to-table work logistically in your restaurant?

Then there’s the whole ordering aspect. At the end of the night, the cooks will powwow and come up with a skeleton of the menu for the next day, come up with a list of things they need, and text that order to the farm crew. The farm crew comes in at 6 a.m.; they have the harvest in by 10 a.m., and that produce reaches the restaurant by 11 a.m. or noon when the cooks start arriving. And that order changes pretty much every day.

When you’re dealing with produce coming off a farm, the valleys are very deep, but the peaks are really high. The commodity lettuce mix that comes from god knows where tastes exactly the same every day, which is to say it tastes like nothing. From the chef’s perspective that’s nice because it’s one less thing he has to think about. But the chefs in our kitchen have to taste and change and adjust on a daily basis. That’s the difference.

Can Black Cat’s model of local be scaled?

ES: I think what I’ve discovered as the business has matured is that it is possible. Is it a slam dunk? No. It takes a lot of work. It requires dynamic thinkers and an organization that embraces change. That’s not the norm. Most large organizations create systems that make change unnecessary. If we went up to 500 acres, could we supply 10 restaurants with our model? Absolutely. Or if we decided to do a cafeteria with thousands of people walking through, could we? Yep, we could do that.

Any advice you could offer an entrepreneur in the farm-to-table world?

What are you growing? What makes a Colorado farm unique?

ES: We’re tucked in close to the mountains, and each night cold air from the mountains floods down around the farm and cools everything off. It is excellent for beets and lettuces and Asian greens, but it’s terrible for peppers and tomatoes. I grew up in Virginia and that Brandywine tomato—that classic huge flavor explosion—is the ideal tomato. And every year I plant some and almost never do I have any that taste even half as good as the ones my grandfather grew out in the east. And it’s because it’s cold here every night. So I need to focus on the cherry tomatoes and smaller ones because those ripen up. Even though I want Brandywines for the sake of nostalgia, I have to be realistic.

I’ve really started getting interested in growing grains, especially older grains. Last year, I grew farro, an older wheat berry similar to American spelt. It did incredibly well. I’ve also done emer, which is the German version of farro. Along the way we bought this antique 1958 combine which I just got to use last week for harvesting.

We grow black garbanzo beans. They’re white on the inside and jet black on the outside. Absolutely gorgeous. If you can imagine the striking color of summer vegetables and tomatoes in a Moroccan tagine, these black garbanzos just stand out so beautifully.

I have acres and acres of dried beans planted: scarlet runner beans, black garbanzos, borlotti beans, lentils, peas and favas. Those are so important. We mill our black chickpeas into flour and use it to make a dish similar to polenta called panisse. That’s a great course for us.

Cooking up change with compassion, collaboration and sustainable food
Mar 07, 2016

Lessons in taste, innovation and the 'impossible' from chef Adam Melonas
Jan 24, 2016