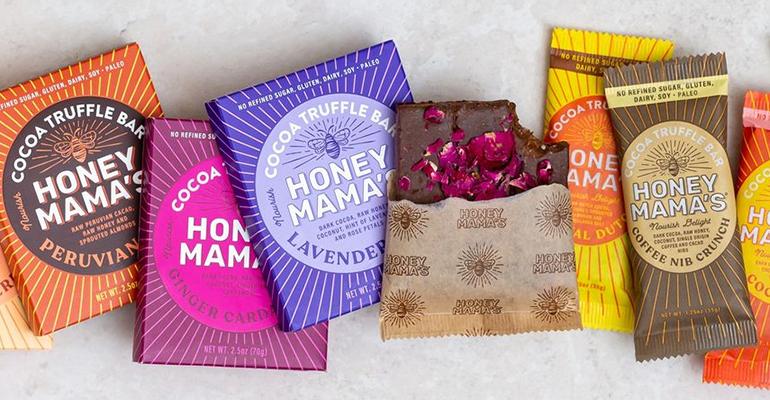 After owning a bakery and a coffee company, this maker of cocoa truffle bars decided to try something innovative: happy food that's nourishing.

When Christy Goldsby founded Honey Mama’s refrigerated cocoa truffle bars nearly a decade ago, she was trying to figure out a product line that was healthful but tasted delicious. 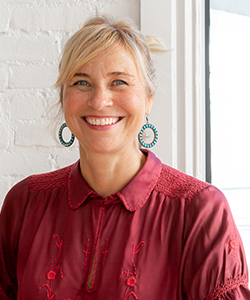 “I wanted happy food that makes you feel connected,” says Goldsby, who previously co-owned Blue Gardenia Bakery and Coffee Roasting Company in Portland, Oregon. “But with more nourishment than a traditional dessert.”

A friend had recently been diagnosed with myasthenia gravis, a degenerative neuromuscular autoimmune disease and asked Goldsby, she says, to do a cleanse based on the book, “The Body Ecology Diet: Recovering Your Health and Rebuilding Your Immunity,” by Donna Gates.

The cleanse dramatically helped both of them, Goldsby says. Within two weeks, her friend, who was planning a trip to Mayo Clinic, felt dramatically better; she discovered she had Celiac disease. It also helped Goldsby’s mental health.

“I felt like it was magic. I have given the book to more people than I can count,” says Goldsby, who has suffered from anxiety and depression. “I give it to all of our new employees. It's the reason I started the company because it taught me so much about gut health.”

With her newfound focus, the Portland-based entrepreneur launched her product—free from refined sugar, soy, eggs, dairy, gluten and grains— in 2013 at a local farmer’s market and gradually scaled her good-for-you treat company. Then, Honey Mama’s Oregon Peppermint Cacao-Nectar Bar won a NEXTY Award at Expo East in 2018 for Best New Sweet or Dessert.

The refrigerated cocoa truffle bars are now in more than 3,000 stores around the country. Honey Mama’s is posed to double that number this year.

Her advice to others in the natural product industry: Believe in your product and never assume that “no means no.”

“Your vision has to be clear, so you allow others to connect to it,” Goldsby says. “You have to realize that you're not going to create some overnight success. It takes grit and tons of hustle to get the attention of a buyer. And you have to be humble and hungry.”

Last year, Honey Mama’s completed a two-phase $10.3 million Series A round of funding round led by Amberstone, a San Francisco, California-based investment firm, and looks to accelerate its growth this year.

Goldsby explains how she won shelf space and became an innovator in the refrigerator case. 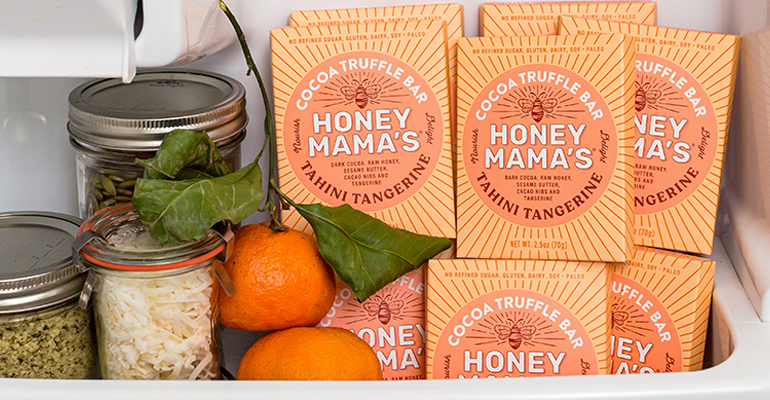 How did you know the refrigerated section was the right place?

Christy Goldsby: In grocery stores, there was Perfect Bar, Hail Merry, a couple of healthy puddings and random stuff. There wasn’t much. I was a little naïve but felt this was a niche enough that it would work, that it would get some attention and there was room to grow.

CG: An early concern was figuring out how to get the right price point that would work and get the margins where I wanted them to be without being $10 million for one bar. I wanted $3.99, because I felt most people would buy a product around that price, but thought $5.99 was workable.

How did you initially get some traction?

CG: I pitched it to the Portland Farmers Market and they accepted me as a vendor. I got the packaging done pretty quickly because I knew the vibe I wanted to create. My husband’s a designer, so he helped me design my original labels.

I started dropping bars off at co-ops and a buyer at New Seasons Market. The response was immediate: They would try it, say this is delicious and place an order. They’d put it in their grab-and-go deli or chilled bakery section. That was our entrance into the refrigerated space.

What advice do you have for other businesses who want to get a buyer’s attention?

CG: Understand who you want to sell to, who your consumer is, to know which buyers you should be talking to. Don’t assume buyers are going to like your product or be bought into it right away. Know your audience and what you are capable of producing to inform your strategy.

How did you get into the refrigerator case within a retailer?

CG: Every single grocer, every single buyer that I've talked to, I always presented a plan of support.

I always ask: “What do you feel like you need in order for this product to be successful?”

Most would tell me to come in every two or three weeks to do a demo for three hours. I offered in-store demos, as often as they needed. You have to be in the store to allow people to taste it. I can't tell you how many products I've purchased because of a demo, where I never noticed the product on the shelf.

What else have you done to get shelf space?

CG: A lot of times buyers don’t know where to put us. We’ll walk floors with buyers and say, ‘This really feels like the space.’ The bigger chains like Whole Foods are very clear about where they want to put us.

What did you do during Covid-19 when you couldn’t do in-store demos?

CG: We’ve leaned heavier into couponing, marketing activation with Social Nature, a digital sampling platform for consumers to try new natural products and emerging brands. We can target different demographics and different regions of the country and choose who we send coupons to.

How did you brand your product and get shoppers to understand it?

CG: It was a challenge. I couldn’t call it chocolate because it doesn’t have any cocoa butter in it. I leaned into the ingredient deck.

I originally used butcher paper wrapped around the bar and a brightly colored label around it. I wanted people to look in the fridge, see that it was beautiful and ask, “What is that?” Once they picked up the bar, they’d see the ingredients, see the organic raw honey, coconut, coconut oil, cocoa and cocoa powder, salt and vanilla and want to try it.

It wasn’t super strategic. It was the artist and maker in me, but it felt like the right way to do it.

How did you rebrand your product?

CG: We changed the name, which was originally Nectar Fudge, which nobody understood, to cocoa nectar bars, and still nobody understood. Then we changed it to cocoa truffle bars. People said it reminded them of a truffle, so we listened.

So how did you change your packaging with your brand refresh?

CG: We spent seven years listening to our consumers. Many said they would never know what our product was based on what’s written on the package. As the company gained national distribution, we were finally able to do a brand refresh.

We maintained our bright, playful colors that are very celebratory. We wanted something that would stand out on shelf and doesn't look like something that is a cookie-cutter product. I still wanted it to feel artisan and giftable.

CG: We’re in more than 3,000 doors. In 2021, we were able to grow quite a bit, which laid the groundwork for national expansion this year, to get into more doors and make that bridge between natural and conventional. We wouldn’t be able to do this without the Series A raise.

We didn’t want to do this out of the gate because it took time to build brand awareness to have a cult following. The first seven years we spent solidifying a strong base of people who could get super excited about it.

Starting in March we’ll be launching in another national retailer, not a conventional retailer. In May, we’ve got more distributions happening.

How are you going to support that distribution growth?

CG: We will continue to sell limited-edition bars, only online on Honey Mama’s. We want something for people who like the product but are excited to try new things you can’t get in the grocery store. It allows us to have nimbleness.

We still manufacture our products in a 12,000 square foot space in the heart of Portland. We did a cherry hazelnut flavor that people went gaga for last year, that we’re going to do again for Mother’s Day. We also did a pumpkin spice flavor for the first time last year. We wouldn’t have been able to do that without the Series A raise, to have the resources to have people in place who can develop innovation.