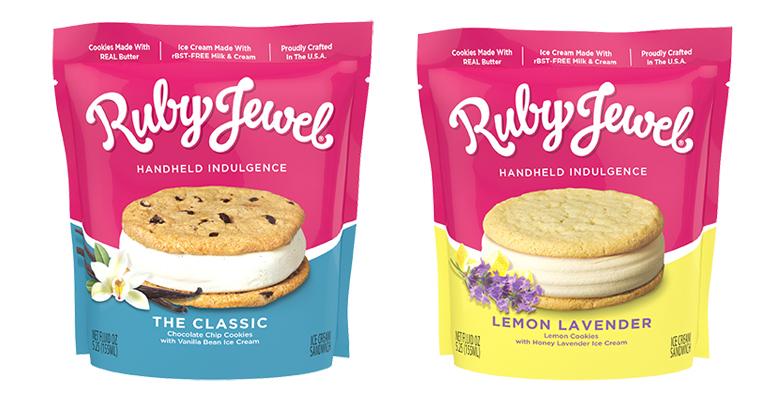 The interesting flavors and quality ingredients are sure to bring consumers back to retailers for more. Find out what makes this treat special.

Reaching the NEXTY Awards finals is a major accomplishment, as about 12% of the hundreds of nominated brands made the cut for the Natural Products Expo East competition. It's even more rare that a first-time nominee becomes a finalist, but a handful did this season. Before the awards were announced in September, New Hope Network writers spoke with these honorees to share their stories.

Anyone who knows Lisa Herlinger would agree: Creating delicious food is her calling.

After completing culinary school at Johnson & Wales University in Denver, Colorado, she worked as a chef at Milo's City Café in Portland, Oregon. In that restaurant's kitchen, she created her unique, unapologetically indulgent ice cream sandwiches, which she soon started selling at the Portland Farmers Market. Eventually, Herlinger took a business class at Oregon University and discovered a competition sponsored by the University's Food Innovation Center.

"America's Food Fight" offered food entrepreneurs the chance to win a commercialization package and a one-year residency at the center. Herlinger wowed the judges and won the competition, giving her the resources and guidance to make the jump to retailers' shelves. This year, Ruby Jewel was a finalist for a NEXTY Award in the Best New Sweet or Dessert category.

Since 2005, Ruby Jewel has grown exponentially, but stayed true to its farmers market roots. Now, it is on a focused mission to bring its delicious ice cream sandwiches to retailers throughout the United States. We caught up with Marketing Project Coordinator Jordan Nicholsen to learn more about the brand's goals.

Describe the taste and texture of one of your ice cream treats for someone who's never eaten one.

Jordan Nicholsen: Even though "The Classic" (Chocolate Chip Vanilla) is our bestselling flavor, we consider Lemon Lavender to be our signature ice cream sandwich. Lemon cookies come together with Honey Lavender Ice Cream for a delicious and indulgent experience. The cookies are soft and have a slightly zesty flavor to them, which pairs perfectly with the sweet and distinctive Honey Lavender ice cream. It truly is unlike anything else on the freezer aisle, completely unique and undeniably delicious.

How do you come up with flavor combinations?

JN: We've always focused on innovating creative, yet approachable flavors. In the beginning, Lisa was very focused on making something different. In fact, she originally didn't even want to make a vanilla chocolate chip sandwich, because it had been done by everyone else. It was only when fans continually asked for "The Classic" Ruby Jewel that she finally gave in and made the best version of that flavor combination you can buy.

When creating a new flavor today, we still reach for something people have never seen before but are intrigued enough to try. We focus on putting a unique spin on trend forward flavors and using premium, all natural ingredients to make the best ice cream sandwiches possible.

Wholesale is a big part of your business model. What are some of the biggest accounts you have, or ones that you are most proud of?

JN: Local retailers like New Seasons and Fred Meyer are very important to us, as they helped elevate Ruby Jewel early on. We're also thrilled to be on shelf in Sprouts Farmers Market, as our partnership with them has made Ruby Jewel available nationwide.

What's one specific business challenge you've encountered, and how did you solve it?

JN: Ruby Jewel is a premium product with a higher price point. In order to make the product profitable, we've made the key strategic decision to focus our investment into the automated production equipment needed to make more sandwiches at a faster rate. This has also allowed us to keep up with our increased nationwide distribution.

What's next for Ruby Jewel?

JN: We have a unique and delicious product, with recognizable packaging and a solid consumer base here in Portland. The people who know us love us, so from our perspective, it's just a matter of making our ice cream sandwiches radically available to the rest of the country.

What would it mean if Ruby Jewel won a NEXTY?

JN: We hear from our fans every day on social media about how delicious our ice cream sandwiches are. It's clear that they recognize Ruby Jewel as the most delicious and innovative all-natural ice cream sandwich there is, so it would mean a great deal to have that recognized by our industry as well.