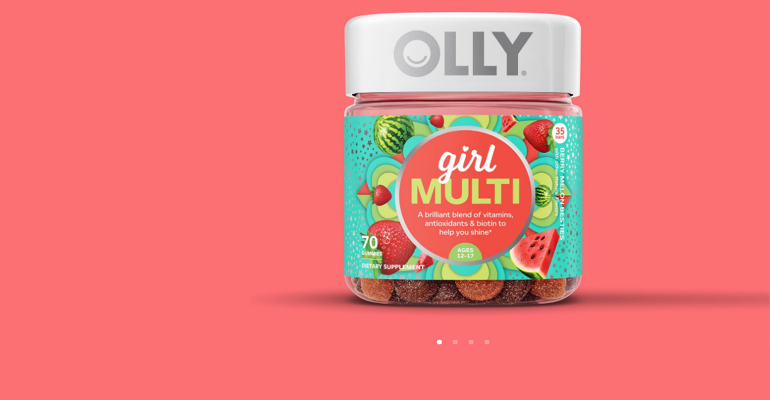 Taking a company from launch to Target to acquisition by Unilever in a few short years earns Olly founder Eric Ryan the 2018 NBJ Management Achievement Award.

In 2015, a new supplement brand with a funny name and a square jar landed in the aisles of Target. For those in the know, there was reason to pay special attention to this particular launch. One of the co-founders, Eric Ryan, was back at the plate with another natural products play after his first, the green cleaners company Method, sold to Ecover (and subsequently to SC Johnson). Another co-founder, Brad Harrington, was the former CMO at Shaklee. This pedigree, coupled with broad distribution in mass retail right out of the gate, gave the industry due pause and signaled the kind of disruption that many felt was long overdue in a stagnant category of consumer packaged goods.

Four years later, Olly has now topped $100 million in sales, expanded into protein powders and bars, and just closed on a high-profile acquisition by Unilever. For this dramatic compression of the growth cycle in natural products, NBJ awards Olly with its 2018 Management Achievement Award.

Ryan, who will take the title of Chief Growth Officer at Olly post-acquisition, is a serial entrepreneur. While still at the reins of Method, he worked with Target to develop their Made to Matter program of emerging natural, organic, and sustainable brands looking to connect with millennial consumers. “There really was no brand in the vitamin aisle with that kind of emotional connection,” says Ryan. “People were stressing out trying to figure out these health products.”

Target has proven to be a good friend to Ryan, with Olly capitalizing on its one-year exclusive before expanding more broadly into additional mass retailers like CVS and GNC. “Going with one retailer out of the gate gives you the time to figure things out,” says Ryan. “Launch, learn, optimize. The trick to this is not that first swing of the bat, but the second and third.”

Olly tapped into the marketing backgrounds of both Ryan and Harrington to unpack the culture shifts that the supplement category had largely missed. No one was speaking all that well to millennials as that generation built health into a lifestyle. Ryan speaks of cold-pressed juices and SoulCycle as proof points of the changes underway. The opportunity seemed clear, but how to seize it?

“We borrowed from the beauty aisle,” says Ryan. “The packaging had to communicate lifestyle, so we merchandised with the square jar, picked a bold name, and put it on the cap.” Perhaps more importantly, Olly formulated its products to speak to benefits rather than specific ingredients. Their top seller is not a melatonin supplement, per se, but a sleep supplement that happens to include melatonin as an active ingredient. “We don’t talk about biotin, we talk about beauty,” says Ryan. “We simplify the consumer equation by laddering up to the benefits. Then we don’t have to chase the fads and hot ingredients. We can take a longer view.”

The strategy was a winner. Olly has proven to be highly incremental on shelf and wildly popular with female consumers. “We had to convince the mainstream to get into green cleaners with Method, and it’s the same with Olly,” says Ryan. “We’re growing the category, not stealing share. With both companies, I knew from day one that these should be positioned as global, mass brands to have the largest impact.”

“They’ve been hugely successful,” says William Hood, managing director at William Hood & Company and lead advisor to Olly on the Unilever deal. “The VMS category, like many other CPG categories, is going through severe disruption right now. It’s the result of that demographic shift to XYZ [Gen X, millennials, Gen Z] from the Baby Boomers. The category dollars are enormous as the Boomer share drops off a cliff over the next 10-20 years.”

Hood attributes much of Olly’s success to Ryan and his ability to see where the category was going, and to develop a product that fit the bill. “Olly really delivered on four big points,” he says. “First is that design aesthetic, with the pretty label and square bottle. There’s also the desire to align with sustainability and establish Olly as a public benefit corporation. Third would be the format, picking gummies as an experiential form in sync with younger consumers. And finally, rather than going after letter vitamins, Olly moved up the value chain to need states. It was clearly the right recipe.”

While Olly did tick all the right boxes at the right time, both Hood and Ryan point to culture as the company’s true key to success. “A lot of companies lack the ability to innovate the way we do,” Ryan says. “We built a culture that could predictably drive innovation.”

That culture involves a passionate team of enthusiasts who figured out how to bridge the gap between aspiration and confusion in the supplement aisle. It’s hard to connect with consumers who lack the deep knowledge of a supplement insider, so Olly created an internal culture to do just that. The goal was defined, and the team was empowered by Ryan to go after it.

“Eric has an unnatural ability to create a very strong culture,” says Hood. “It’s a hard thing to replicate, but Eric’s done it twice now. He has an ability to unlock potential in sleepy categories through a culture that really is the magical ingredient to his overall success. We were able to showcase that culture as a major point of differentiation throughout the process.”

The success of Olly likely serves as a harbinger of good things to come for a new wave of products entering the supplement category. Hood points to SmartyPants, HUM, Persona, Ritual, and Care/of as brands well aligned with the future direction of consumer demand. Each connects in its own way with some of the major trends that Hood sees as the growth drivers for supplements going forward, namely connective marketing with a younger demographic, a strong DTC strategy, personalization, gummies, transparency, and needs-based formulations. “Olly is affirmation of a new wave of disruptive products and brands that are entering the market,” says Hood. “They’ll grow quickly, and I expect to see a lot of interest in these kind of supplement brands over the next few years.”

As for Ryan, the serial entrepreneur is staying involved with Olly to help effect an international expansion plan, but the itch is already back. For his third attack on consumer packaged goods ripe for disruption, Ryan has just launched Welly. It’s a design-forward approach to first-aid, with longer-term goals as a broader healthcare platform, and there’s another one-year exclusive with Target in the offing. Prepare for a better band-aid, and another dramatic growth trajectory in an unexpected category ready for some fresh thinking.