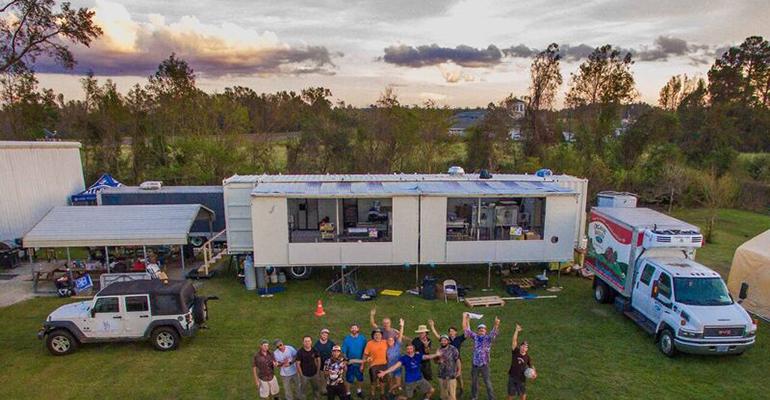 Two visionaries and natural industry CEOs join forces to create a non-profit that will aid communities in crisis.

Organic Valley CEO George Siemon and Dr. Bronner’s Cosmic Engagement Officer David Bronner are no strangers to giving back, and their recently launched Grassroots Aid Partnership (G.A.P.) is testament to that spirit. The burgeoning non-profit is Siemon’s and Bronner’s attempt to formalize what’s already been a long-standing commitment to helping people in need, and they’re hoping to inspire the rest of the natural products industry—or anyone, for that matter—to join them.

“We’ve always been driven by volunteers,” admits Siemon, adding that his 2,000+ member cooperative has been spreading goodwill as far back as he can remember. It started years ago after an Organic Valley truck driver experienced a tornado in the co-op’s home state of Wisconsin, and came to Siemon with a plea to help those affected. “So we did that,” says Siemon, “and it just opened our eyes to the incredible need in these disasters.”

Siemon goes on to say that “it’s so much more than just handing out a bottle of water to somebody. When you bring the food and cook for people, it turns it into a whole other personalized experience. I’ve been really happy to be a supporter of that, but it really became so much a part of our personality; we realized we needed to start formalizing the process more than we had, and bring in more people as partners. And that led us to Dr. Bronner’s, which also wanted to get involved in disaster relief.”

Indeed, Bronner himself is recently back from a weekend trip to Rocky Point, North Carolina, where GAP mobilized to support people in crisis after Hurricane Florence ravaged the area in September. “A local church [Lighthouse Worship Center] was set up and feeding everyone but was very overwhelmed,” shares Bronner, “so we got our kitchen in there with FFRE [Family of Friends Relief Effort], Rainbow Family and Organic Valley.” That kitchen is a large customized trailer that Dr. Bronner’s has used for its renowned festivals; the company deployed it last year to Immokalee, Fla., for Hurricane Irma relief after Organic Valley tipped them off to the need while assisting with Hurricane Harvey relief in Houston, Texas.

Unfortunately, the disasters keep coming: in the aftermath of Hurricane Michael, Florida finds itself in crisis once again, and GAP plans to be there to help. Bronner admits a lot of it is trial and error at this point. “We’re building the plane while we’re flying it. This new coalition is real early…it was supposed to launch next year, but we figured we’ll learn a lot more by doing it than not doing it.”

“We see an opportunity for natural products brands to really participate in a very meaningful way,” offers Bronner, whose company has donated $50,000 to get the initiative rolling. While still in its infancy, the GAP website accepts PayPal donations, supports in-kind donations and solicits volunteers. And true to their philanthropic natures, both Siemon and Bronner encourage anyone wanting to get involved to contact them directly. The pair also plan to ensure that GAP has a presence at Expo West 2019.

Siemon sums it up in a heartfelt way: “By formalizing this, we’d really like to see more natural companies join in with us. People do give away food already but it kinda goes into the great big warehouses, and this is an opportunity to get closer to the real story…there’s nothing like working at a disaster relief to restore your faith in humanity.”

What the co-CEOs of Lotus Foods prioritize to reduce their carbon footprint
Oct 24, 2018