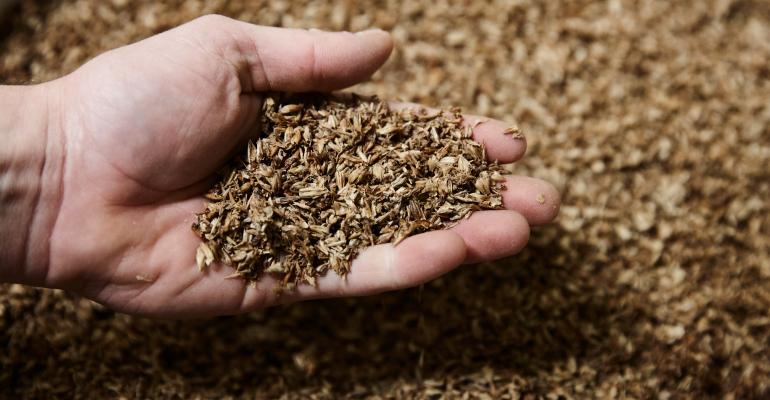 It’s hard enough to launch a new nutrition bar in the crowded natural bar category. It’s even more difficult to launch a bar that employs landfill-bound food waste as a main ingredient. But that’s exactly what Dan Kurzrock, co-founder and CEO of ReGrained, did after he learned about the astonishing amount of food waste generated from beer production in the form of spent grain—fermented grains such as barley used to make beer.

Kurzrock first discovered the issue while learning how to brew his own beer at home. In addition to his tasty brew, he also ended up with piles of spent grain that didn’t have a use. The best way to get rid of them was to compost the grain. Larger breweries sometimes ship spent grain to ranchers to be used as animal feed.

But in a time when a whopping 40 percent of food is wasted in the United States, Kurzrock believed that using this high-quality, protein-dense and bio-available grain for compost or animal feed was a missed opportunity. “There’s a pound of grain that goes into every six-pack of beer,” says Kurzrock. “It should be going to the highest possible use. We exist to better align our values with the food we eat. We’re addressing the area of food waste that hasn’t been looked at before because spent grain is an unavoidable byproduct of another product, analogous to whey as a byproduct of yogurt making.”

Plus, an increasing amount of research shows that spent grain is healthy for humans. Spent grain typically has lower levels of starch than other grains because the yeast has fed on the sugar. And a 2017 study published in the Journal of Food Science found that spent grain is an excellent source of prebiotic fiber, protein and bioavailable phenolic compounds that contain antioxidant and anti-inflammatory activities. Spent grain, in other words, isn’t spent at all.

But spent grain can’t simply be captured from the brewery and baked into a bar—it’s waterlogged, and it must be dried and processed within hours of brewing, a logistical challenge that has to date limited its use in CPG food products. ReGrained pioneered a process to ready the grain for use in finished products (such as it’s tasty beer-branded nutrition bars). And thanks in part to a partnership with Griffith Foods, a 4th generation family-run global ingredient and product development company, you may soon see ReGrained’s branded SuperGrain+ spent grain appear in more product formulations.

Kurzrock relates that in an effort to develop spent grain into a usable food ingredient more easily, he and his team quietly started to work with Griffith Foods. Originally, the partnership was focused on finding efficiencies to further develop SuperGrain+. But recently, Griffith led ReGrained’s investment round that closed $2.5 million—priming the company to expand the supply side of the business. “In terms of synergies, Griffith fills the value chain between us and the customer, so SuperGrain+ can find as many product outlets as possible,” says Kurzrock. “The goal originally was to explore what a B2B partnership would look like with the company. As we got to know each other, Griffith expressed interest in exploring that deeply with us as investors.” He adds that even before they started working with ReGrained, Griffith had long been passionate about finding innovative food waste mitigation solutions.

With support from Griffith Foods and Barilla BLU1877, an additional investment participator, SuperGrain+ is primed to be included in a myriad of natural product formulations for added nutritional benefit and a sustainable sourcing story that resonates with conscious consumers. According to Kurzrock, spent grain flour is incredibly versatile, and can be employed in any dough-based foods ranging from crackers to pasta to chips. The ingredient functions particularly well in condiments because it can thicken marinades, glazes and sauces.

Ultimately, with more food applications, there’s more opportunity to use a landfill-bound ingredient in finished products rather a virgin ingredient—which has meaningful environmental benefits particularly when you consider water usage. At its core, beer is an agricultural product. While it obviously takes water to produce beer (um, because it’s liquid), around 90 percent of beer’s water footprint is growing the grain.

SuperGrain+ maximizes the resources required for beer production by nourishing people—an idea that galvanizes Kurzrock to keep innovating. “It’s an exciting time to reduce food waste. We’ve had inquiries from major multi-national food companies and beer companies alike. We’re at the fulcrum point for the industry.”

How this food waste product is feeding the fiber market
May 22, 2018

Barnana co-founder on the challenges and rewards of upcycling 'ugly' bananas
Mar 20, 2018