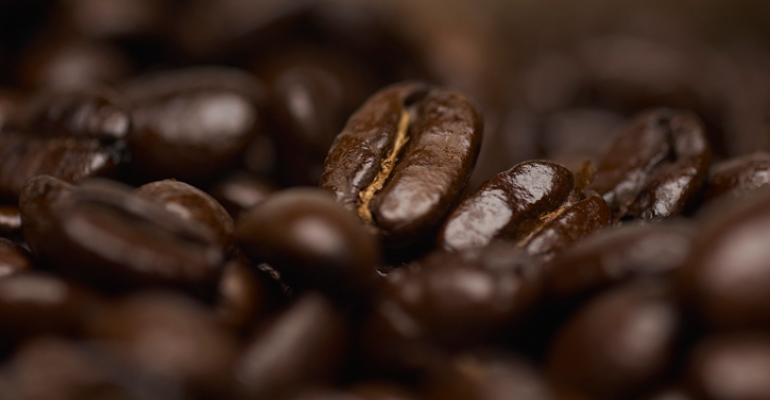 The Sustainable Coffee Challenge, winner of the 2017 NBJ Award for stewardship, doesn't police practices but rather enlists companies to lead each other.

Each day, millions of Americans start the day with a cup of coffee, many calling the first cup the most important moment in their morning ritual. In total, some 400 million cups are sipped and gulped over the course of a day.

Simultaneous to this growth, coffee production faces decline due to extreme weather events, new pest outbreaks and dwindling farmer populations. “We’re facing a precipice in coffee,” says Bambi Semroc, VP of sustainable markets and strategy at Conservation International, “where climate change is going to cut in half the areas for growing coffee by 2050.” CI foresees demand doubling or tripling in the same time frame.

That’s where the Sustainable Coffee Challenge comes in. Semroc founded the program within CI, with help from Starbucks, the Global Coffee Platform and the Specialty Coffee Association, to bring sustainability into coffee production across sectors.

“In coffee, there’s a different imperative to do this,” Semroc reiterates. SCC isn’t, for the most part, a do-gooder effort or a marketing opportunity for participating companies. The goal is ensuring we get our coffee for mornings, and decades, to come. “We saw a bunch of different crises hitting the coffee sector,” she says, “so it’s also in the companies’ best interest to try and get ahead of that and figure out ‘OK, what do I need to do to make sure I have coffee that I can source and put on the shelf in the future?’”

The opportunity SCC saw was to create demand for sustainable coffee among the biggest market players. This, says Semroc, required participation from big brands. After 20 years of looking at the problem, she says, “we’d gotten some companies like Starbucks to a point where they were sourcing like 99 percent of their coffee through sustainable mechanisms”—an impressive feat, but one that left Semroc and others asking what came next. “They’re about 4 percent of the global market,” Semroc noted, “so there’s 96 percent of the global market that we still need to change.”

The typical mechanism for increased demand is consumer education: get the consumers asking for it, and brands eventually step up. This wouldn’t be fast enough, Semroc believed. “We set up some mechanisms to drive this kind of peer pressure race to the top, and not just be like, ‘How do we educate consumers and how do we educate others to care?’ because that’s a really hard thing to do.”

Today, SCC has over 80 brands and organizations on board, including Rainforest Alliance, Keurig Green Mountain and Allegro alongside Farmer Brothers, Nespresso and Walmart. McDonald’s has pledged 100 percent sustainably sourced coffee by 2020.

“Our size and global reach give us the responsibility to lead meaningful change around the world,” said Victoria Zimmerman of McDonald’s Corp. in a statement on SCC’s website. Certainly, both sustainable practices and consumer education were already well underway. Without those decades of hard-fought efforts paving the way, the current effort would lack structure. “There is certainly a comparison to be made here with the natural products industry,” says Neil Blomquist. “It took many small companies, farmers and dedicated consumers to seed our beginnings. Corporate acquisitions, mergers and Wall Street capital have become who we are today.”

Often the real innovation remains small. “We still need small, innovative companies and individuals to drive innovation and protect our values,” Blomquist says. “The same goes for the coffee industry.”

Improvements in these areas will certainly have a huge value to the communities and environment in the coffee growing regions, says Blomquist. “Coffee has a very tainted history of third-world abuse that needs to be remedied. This effort also gives the growing number of consumers what they want to know about where their coffee comes from, and how the brands they buy from are taking care of the farmers, the local people and the environment,” he says.

What the SCC framework does not offer is auditing or certification. “We’re not the police,” says Semroc. “You’re actually policing yourself. If you can show that your initiatives are contributing to those outcomes, that’s great!”

Blomquist sees a risk, here. Managing costs is the highest priority for importers to stay competitive, and the temptation to cut corners will always be there, as will the risk of greenwashing. This is where third party certification programs like organic, fair trade and Rainforest Alliance come in, he says.

Semroc, too, lists efforts at play to make individual supply chains sustainable, including corporate-run programs, third-party certification, direct trade programs, “and even companies just investing in their supply chain,” she says. “We weren’t trying to say one is better than another because we don’t really know.” The practices and outcomes have consensus, she clarifies, but which programs best stimulate those practices lacks agreement. “Since we don’t know that, we didn’t think we could choose a horse and bet on it entirely,” Semroc says. “All these horses are running the race and we want them all to finish and do the best that they can.”

“Are we making a difference? I’d say yes,” says Semroc, “though there’s still an awful lot to do.” Recently, the challenge started action networks bringing companies together on specific task areas, like scaling up production or improving labor practices. It’s provided a new challenge of cooperation. One Semroc frames as, “How do we learn to play in the same sandbox and build the same sandcastle?”

It’s this call for collaboration, potential pitfalls and all, that inspires the award. Last year we honored OSC2 for efforts like The Climate Collaborative for similar efforts. Internal commitment, self-monitoring and sharing of successes are key to both programs.

“The Sustainable Coffee Challenge provides an unprecedented opportunity to join with others, share what we’re learning and ensure all coffee is sustainably sourced worldwide,” states Kelly Goodejohn of Starbucks on the SCC website.

Semroc doesn’t see a problem with the demand for transparency or the self-policing. Partners should want improvement in the four focus areas, she says, “because you want these programs to deliver those types of results, those sorts of outcomes.” The results are coming together, too, she says, because “there’s an increasing realization that we’re a finite world, and we’re all thirsty for coffee.”