HomePeople and Company ProfilesVeganButter drives mainstream expansion for Miyoko’s Kitchen
Recent
Latest
4 tips to get ahead of chemical concerns in packaging
May 20, 2022
7 CBD favorites in the increasingly popular gummies format
May 20, 2022
Mission MightyMe helps parents introduce allergens to babies
May 20, 2022
UNFI's Eric Dorne to step down as chief operating officer
May 20, 2022
Trending
Whole Foods' honors 30 companies with 10th annual Supplier Awards
May 18, 2022
Sponsored Content
The rise of sustainable business – eGuide
Sponsored Content
Getting ready for 2023: Trends for brands to consider
May 17, 2022
Sponsored Content
Unboxed: 7 plant-forward ice creams to stock this summer
May 10, 2022 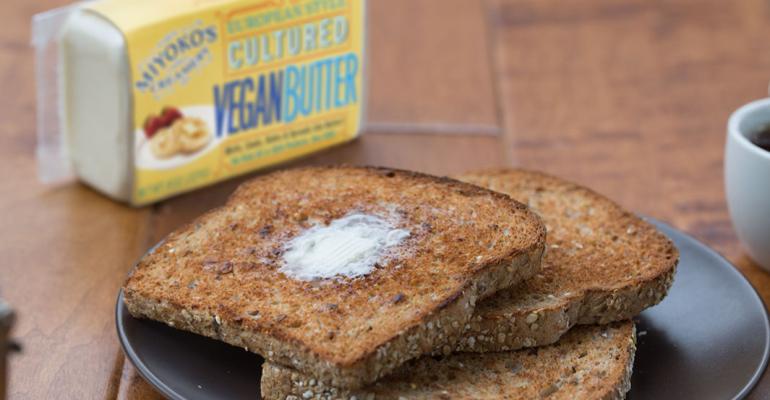 Miyoko’s Kitchen has made a name for itself in the dairy-free cheese sector over the last few years, but its plant-based cultured butter may be its most revolutionary product yet. The European Styled Cultured VeganButter won a NEXTY Award for Best New Special Diet Food at Natural Products Expo West 2016 and is being picked up by mainstream retailers nationwide that don’t even carry the cheese line. We caught up with CEO and founder Miyoko Schinner about what award has meant for the company.

Congratulations on the NEXTY! Tell us more about this award-winning butter.

Miyoko Schinner: It's delicious. I hear people say, 'I used to eat my bread with butter, now I eat my butter with bread.' We start out with cashew milk and inoculate it with dairy cultures and ferment. It’s the way they used to make butter in the old days. It's the first vegan butter substitute that is really butter and not margarine. It's not flavored with artificial additives or anything. It looks like butter, it performs like butter in every culinary application. It’s the only vegan butter you can actually brown. It's also the only one on the market that doesn't contain any palm oil. It's all about the cashew.

We launched the cultured butter at Expo West last year. We're actually just getting into distribution—until last spring, we only had distribution in the West. The butter is going into Kroger in September, and it’s been picked up by some Publix stores and Whole Foods. The butter is going to be more or less nationwide. It got picked up by Trader Joe’s. They started carrying it in the Western region, about 240 stores, in December. Really, what's holding us back is capacity. We’re building a new facility now and moving there in September.

Has the award opened any doors for you that you might not have had otherwise?

MS: We definitely use it in our marketing material. Whenever we have a pitch to a major retailer, the NEXTY is prominently displayed. When I was pitching investors, I always mentioned it. It means a lot; people are very impressed with it. We say it's an award-winning butter. I think it helps, but people don’t say, 'I wouldn't buy it if it didn't win a NEXTY.'

The NEXTY was very exciting for me. I was not expecting it at all. We were a very scrappy, startup operation. We had a handmade booth, built the stands out of cardboard. We really didn't have any money beyond paying for the booth at the time.

What kind of growth are you experiencing?

MS: We’re growing in triple-digit figures. We’ve only been around since September 2014, and in the beginning, it was only e-commerce. Then we added California distribution.

It's kind of an exciting time. There's a lot of money out there. I know some companies are having a harder time than others. I have investors calling me all the time, even now—even when I'm not looking.

Which products are your best-sellers?

Where are you focused right now in terms of growth?

MS: Geographic expansion is our No. 1 thing, because we can't do a whole lot until we get into a better space. So that's really critical. We have a whole bunch of other products in tubs that we’ll launch at Expo East—we’re getting into cream cheese, in several flavors. It will be the only [vegan] cream cheese, except for one other brand, that doesn't have other oils, and just like our butter, you’ll be able to use it in every other application you can use traditional cream cheese in. And the flavors are not on the marketplace yet in nondairy equivalents—they exist for real dairy, but not for nondairy. So we’ll launch a tub line, and we're also rebranding. We’re unveiling that at Expo East.

You work with a lot of cashews; are you expanding the types of ingredients you use as well?

MS: Right now they’re all cashew-based. We’re trying to work with other substrates. We've played around with legumes and other seeds, but it won't be until at least about a year out that we have something ready.

MS: Whole Foods was first, in December 2014. We were only in NorCal for the first year; we went to nine regions around the same time as we launched the butter. As of next month, we'll be in 10 out of 11 regions. The only region we’ve not heard back from is North Atlantic. We were in a lot of independents after that. The second biggest retailer may be New Seasons and then Natural Grocers.

The market for nondairy products has been exploding. Has that helped you as a brand, or is it just an increase in competition?

MS: The whole category is just blowing up. Nondairy cheese grew 32 percent, nondairy milk like 15 percent. It can only help—shelf space is expanding, and buyers are more willing to give you that shelf space. Before, retailers were like, 'Well, I already have one vegan cheese.' Now, I walk in and there are whole sections devoted to vegan cheese.

The NEXTY Awards recognize progressive, innovative, inspiring and trustworthy products in the natural products industry. Nominations for the Expo East NEXTY Awards are open through July 21. Submit a nomination here.