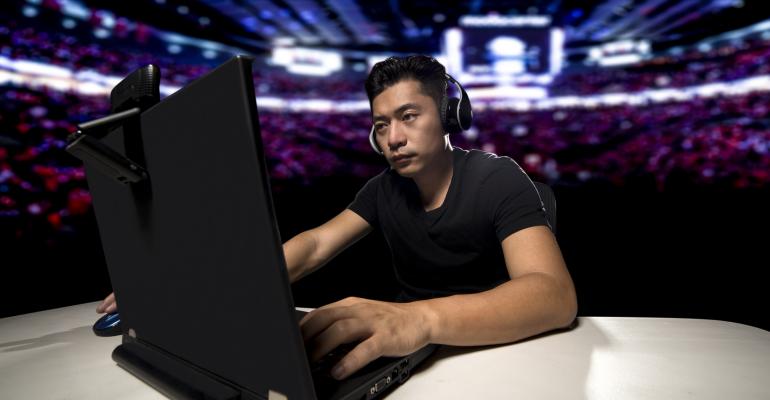 Vision, endurance and nootropics meet in front of the gaming monitor. It could add up to a win for the supplement industry.

Imagine being air dropped into a grassy field, where you hit the ground running while rapid-fire shots whiz by. You dodge bullets with lightening reflexes and launch a grenade into an abandoned house, the source of the attack. From the corner of your eye, you catch sight of another attacker behind a bush.

Adrenaline is pumping. You need to be alert, primed, focused.

Except that you are jittery from drinking two Red Bulls, your eyes are weary from staring at a screen while playing “Fortnite” for five hours, and you really have to pee.

Playing video games can be strenuous work (don’t laugh), and professional players (yes, there are pros) would say their bodies have high performance demands much like traditional athletes. Now smart supplement makers are playing to the growing gamer culture, marketing natural brain-boosting nootropics, energizing vitamins, and even herbal formulas to protect eyes from the harmful blue glare of computer screens.

As any healthy athlete knows, you can’t train and win on a diet of caffeine, sugar, and Adderall (especially when Adderall has been banned by the Electronic Sports League). This emerging esports market sector has major potential. Chris Miller, founder and CEO of the Colorado-based nootropic beverage company Koios, calls esports “the biggest industry no one has ever heard of.”

Millions of online players log in to games like Call of Duty, League of Legends, Overwatch and many others daily. “Fortnite” hosted 3.4 million concurrent players in February alone, according to company numbers. When gamers aren’t playing, they are watching next-level players on streaming services like Twitch and watching pros at organized, multiplayer video game competitions like the League of Legends World Championship, which sold out Madison Square Garden last year. In North America, 52 million people will watch at least one pro esports event in 2018, according to Newzoo, a video game market research firm. Viewership is projected to grow to 66.3 million by 2021.

Matt Titlow, CEO of the company that produces TeaCrine, a popular ingredient in many start-up supplement brands being sold to gamers, wanted to check out the potential marketplace in person. So, in June he headed to E3, the video-game industry’s largest convention.

“We went simply to understand the market,” Titlow says. “We came away thinking there is a massive nutraceutical opportunity.”

Hack your brain, not the game

This emerging market is ripe for nootropic products—so-called “smart drugs”—natural and synthetic compounds believed to boost brainpower. Nootropic blends often include L-tyrosine, L-theanine, huperzine A, choline, and theacrine. The individual ingredients have been around for years, but the packaging and marketing has evolved.

Silicon Valley programmers and entrepreneurs made nootropic “biohacking” popular in the last five years or so, and now early brands like Mind Lab and Nootrobox are turning a laser focus on gamers. Nootrobox, for example, sponsored the esports team, GankStars, in 2016 when it launched Go Cubes, a chewable nootropic + coffee product.

G Fuel by Gamma Labs—a new energy drink incarnation formulated with nootropics, 150 mg of caffeine and lots of antioxidants from fruit—also was one of the first to the video gaming market space. G Fuel landed a sponsorship deal as the official energy drink of eSports™.

E-athletes are responding to the marketing.

“Gamers in the last year or two have really started to realize the potential of nootropics, especially for their ability to get them into a ‘flow state’ so they can concentrate on what they are doing for hours and hours,” says Dan Scalco, who reviews nootropics on his blog, BrainWiz.org.

One of Scalco’s favorites is NeuroGum, a crowdfunded start-up that actually didn’t begin with players specifically in mind. “But turns out it is a perfect product for people who are gaming,” says co-founder Kent Yoshimura, who grew up on video games.

NeuroGum’s creative delivery system and promise of clean, focused energy earned it quick popularity and spots on the “Dr. Oz Show” in 2015 and in Time magazine.

That attention earned NeuroGum an older customer base. But now NeuroGum is showing up as a sponsor of collegiate esports teams and in the hands of popular online players and influencers. As he carves out NeuroGum’s place in this esports market space, Yoshimura says he is working with Esports One data and analytics company, and his advisory board includes celebrity video game producer Josh Resnick (“Star Wars Battlefront”). Yoshimura says his company will introduce mints next, using the same sugar-free formula that includes L-theanine, an amino acid found in green tea, and vitamins B6 and B12.

“The popularity of nootropics comes from our knowledge now that the energy products that were in the marketplace five years ago are extremely unhealthy and ineffective in the long run. We’re talking about energy drinks, caffeine pills …,” Yoshimura says. “With nootropics, people can be much more meticulous about how they track their health and their performance and back it up with these ingredients that have research articles and clinical studies.”

Another direct-to-consumer nootropic start-up is Valis, a capsulated nootropic formula that hit the market about six months ago as “The Professional Gamers’ Success Secret.” Co-founder Cameron Chittick of eSport Labs, based in Colorado, said the idea for the Valis hit him when he was playing Overwatch particularly poorly one day and wondered if there was a nutritional supplement that could help him reach peak gaming performance.

According to the label, Valis’ “lightning reaction” blend includes ginseng and L-tyrosine, an amino acid that is used to produce noradrenaline and dopamine. For “coolness in chaos,” there’s L-theanine. CDP-Choline and huperzine-A from toothed clubmoss provide “cerebral clarity.” And for “unbreakable focus,” there’s anti-aging anti-oxidant DMAE bitartrate and rhodiola root, an adaptogenic herb.
“Coffee is old technology. It’s like a flip phone. Nootropics are the iPhone of the supplement industry,” says Miller of Koios, which recently launched a reformulation of its fruit-flavored drinks and powders.
Koios ingredients include bacopa leaf to enhance concentration, MCT oil from coconuts for energy, lion’s mane mushroom for memory and nerves, the natural stimulant guarana, and L-theanine, an amino acid shown to have a calming effect on the brain.

“When we launched our product, gaming was something we really wanted to be part of because of how fast the industry was growing and because it’s an industry I know and love,” says Miller, a regular Call of Duty player.

“Koios makes me a gaming GOD! I don’t game without it.”

Miller says his goal is to help legitimize esports and esports nutrition, because the brain consumes more energy than any other vital organ.
“You know, a lot of times people minimize esports by saying these kids are just playing video games,” Miller says. “But it’s like saying anyone can play basketball. No you can’t, not at Lebron James’ level you can’t. It’s the same with gaming. The kids who are the top gamers in the world have tests off the charts when it comes to neuro-connections, creativity, analytical speed. These kids are brilliant.”

An increasingly popular nootropic ingredient in supplements for gamers is TeaCrine, a branded form of theacrine by Compound Solutions Inc.

Theacrine is a naturally occurring chemical similar to caffeine and found in natural sources such as the camellia assamica var.kucha tealeaf, coffee, and certain exotic fruits. It’s touted for delivering energy, mental clarity, and improved motivation and mood without the jitters and crash of coffee.

Compound Solution’s Titlow says the brand has spent over $1.5 million so far on deep dive studies and human clinical trials of TeaCrine.

It’s paying off: TeaCrine launched about four years ago and is in more than 160 active brands, including gamer-friendly products like VitalFuse’s Fuse Focus capsules, Mod Elite Gaming Supplement, and Mynd Kandy’s multi-colored and flavored capsules.

“We unequivocally know our ingredient is going into a lot more gaming products coming up,” Titlow says.

Many brands pair TeaCrine with caffeine for a quicker kick. But in January, Compound Solutions launched Dynamine, a chemical cousin to TeaCrine and a faster-acting version, which Titlow says could replace the added caffeine.

Mynd Kandy is a nootropic start-up determined to ditch the unhealthy stimulants.

“If you are in esports and video games ,you don’t want your hand shaking on the controller,” says Ceo Chad Frankos.

The colorful bottles of Mynd Kandy don’t just promise to eliminate the caffeine shakes. Frankos’ brand, which launched in 2017 and was a Supply Side West finalist for supplement of the year, focuses on eye health—another supplement trend in the gamer supplement market.

The eyes have it

Other eye-health ingredients marketed to gamers include lutein and bilberry extract.

There is a rising demand for eye-health ingredients overall, spurred by aging populations and interest in preventative health. NBJ estimates that consumer sales of lutein are expected to hit $185 million in 2018 and $227 million by 2021.

OmniActive Health Technologies CEO Brian Appell explained that lutein and the zeaxanthin isomers like those found in Lutemax 2020 are deposited in the region of the eye responsible for highest visual acuity and color perception—the macula where they act as a blue light filter and play a role in visual performance and visual processing speed.

“I think energy and focus have been primary endpoints gamers look for,” Appell wrote in an email. “But we believe that as they begin to understand that they can actually improve their game—by increasing visual processing speed—and play longer by mitigating the effects of prolonged screen time, they’ll see macular carotenoids in the same light as creatine for bodybuilders, as an example.”

Danner launched Eye-Q and the nootropic formula Area 10, about a year ago, selling direct-to-consumer and on Amazon. She says she’s surprised by the youthful customers she has attracted, unwittingly tapping into this barely tapped market.

Many more supplement companies are trying to claim their market share, but challenges lie ahead.

“The whole world is trying to figure out how to capitalize on a market that is almost exclusively online,” says Titlow.

Titlow and others will look to the traditional sports marketing model: team and event sponsorships and endorsement deals with influential players.

It shouldn’t be a hard sell, according to Miller of Koios.

“At the end of the day,” Miller says, “who doesn’t want to have more clarity, cognitive function, memory recall, feel smarter, brighter, work harder, quicker in a world that is increasingly distracting?”
Game on.