Innovation at every level of the supply chain: The future of natural products 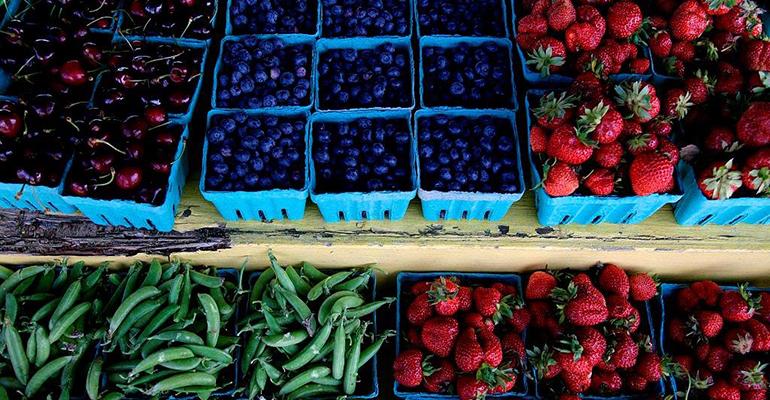 Here, leaders at the forefront of the industry explain why brands are more successful when they improve upon the food system as a whole.

Working at the farmers market during college, Patrick Mateer was excited by what he saw: consumers and farmers connecting over eager demand for fresh and local food. But he was concerned, too, about the excess that was coming back from the market unsold with no other clear outlet, and about the problem of aligning the daily output of the farm with the weekly opportunity of the market.

Attempting to solve these problems for farmers, and meet consumer demand for local, Mateer created Seal the Seasons, a frozen fruit brand hitting the market with an unprecedented model.

“We wanted to replicate that same local feel in the grocery store by introducing lines of locally sourced, locally frozen, and locally sold products,” says the company’s COO Alex Piasecki. That means contracting with local farmers, freezing the goods locally and distributing only to markets in the region—all within about a 300-mile radius.

On the shelf, the frozen, bagged fruit Seal the Seasons brings to market, is nothing new. The innovation demonstrated is in the way it serves farmers, communities, consumers and retailers behind the product. And this may be the next wave of innovation in the natural products space. “It’s not always about engineering something new,” Piasecki says, “because we can always engineer something new. It’s all about understanding the story and who you’re supporting with your dollars, more so than what you’re buying.”

In many ways, this view is the core and founding ethos of the natural and organic products industry, and the influence the industry exerts throughout the U.S. food system is undeniable. But even as innovation and competition in this now $219 billion industry reaches a fever pitch, many experts witness an ironic stagnation in meaningful change. Does the market need more flavor choices in popcorn or more format choices for matcha? Maybe. But what the world urgently needs is innovations that work to regenerate the systems—ecological, financial, cultural and climatic—so threatened by rampant consumption.

“We brought this just amazing innovation to the food industry,” Robyn O’Brien says about the natural products industry, “and we’ve reinvented these toxic products, brought them back into this wholesome, nutritious product.” The author, speaker and vice president of impact investing firm rePlant Capital has been tracking the industry throughout her career. “But then we just got stuck, and we kind of kept trying to reinvent ourselves on that wheel. And it just became a wheel that, instead of moving us forward, started spinning in place.”

Too much of the industry today, O’Brien believes, is focused on the end-user product. “But if you think about everything it takes to get there, we need innovation at every level, from distribution to packaging, to transportation.”

Seal the Seasons may not hit every level, but it is pioneering something meaningfully different in distribution. The company has now replicated its model in six growing regions across the country, working with nearly 60 farmers and selling frozen fruit in 3,000 grocery stores, proving that a local focus doesn’t inhibit a company’s national growth potential.

There are clear ecological benefits to its model (Piasecki says each two pounds of fruit eliminates one pound of greenhouse gases when compared to average frozen food), but the motivation for the brand is really in the people it serves: the farmers struggling in a global market, the retailers attempting to satisfy demand for local, and the consumers seeking that local product—whether to support the farmer they met at the farmers market or just to buy American.

It’s only going to become more important, Piasecki predicts, as consumers increasingly care “not only what their food is, but where it’s coming from, what it’s treated with, who’s growing it, are they paid a fair wage?” Quality matters, too, and he believes Seal the Seasons delivers on this. But he distinguishes between brand promise and product promise, which is just a matter of quality standards.

Taking a step back

TerraCycle CEO Tom Szaky distinguishes between two different types of innovation. Even when trying to solve big problems, innovators often employ what he calls “twist innovation,” wherein tweaks are made to existing product concepts to make incremental improvements. What inspires Szaky, is what he calls “step back” innovation.

By stepping back to look at the problem being solved, Szaky says, innovations can stimulate monumental leaps into the future. “Uber’s a good example, right? It’s not a better cab or a better price, it’s thinking about the concept of mobility within what resources are on the road today,” he says.

“Or taking an arbitrary example of oral hygiene, I take a step back and first understand why it is the problem of oral hygiene even exists, what are the causes?” That, he says, is when innovators start thinking about not just the object, but the way the consumer receives it and interactes with it. Once the source problem is understood, he says, “you may land on an answer that doesn’t look like a toothbrush at all.” That would be a unique market advantage compared to a toothbrush “incrementally twisted” to feature new bristles or a better handle. “And I think that’s where you’re going to get the biggest opportunity to succeed, especially as an entrepreneur or a smaller company.”

TerraCycle exists to eliminate the very idea of waste through collection and remanufacture programs. This intersects with the food and household goods industry on packaging. After all, even as islands of single-use plastics continue to pollute the oceans, “packaged” remains the middle name of the CPG world. (Indeed, TerraCycle’s programs include working with P&G to package the world’s top-selling shampoo, Head & Shoulders, in recycled ocean plastic.)

For TerraCycle’s most ambitious program to date, the team applied a step back approach to packaging, asking why packaging exists and how those needs can be met without giving in to single-use materials. This step back also included a look back.

“In the past, garbage didn’t exist,” Szaky says. “Things were reusable, things were beautiful, things were more durable, things were higher quality.” All major positives, he says, especially when compared to the disposable, low-quality packages we use today that don’t often deliver a particularly good consumer experience beyond the most basic function.

The exploration resulted in Loop, a bold plan to create packaging that is both durable and appealing to consumers and can be returned, cleaned and reused—not recycled—at the same value level again and again, and to build it with the biggest players in household goods: P&G, Nestle, PepsiCo, Coca-Cola, Clorox and Unilever. This required “thinking beyond the three-dimensional design of the product and the two-dimensional artwork that adorns it,” Szaky says, and tackling the system behind it. Each of these brands, and others, are participating to create what Szaky calls an ecosystem, and thereby a critical mass of offerings consumers can interact with—something he believes is required to create the momentum necessary for Loop to be successful.

Presently the programs are handled by mail, but eventually will involve major retailers selling goods and collecting empties.

In other words, not settling for a new twist on packaging has the potential to be, Szaky says, “a monumental reinvention of the very concept of that idea in a very futuristic way.”

The program is off to a good start. Since its launch early this year—with a few hundred products in a handful of cities—Project Loop has engaged over 10,000 consumers.

“The world is falling deeply out of love with packaging,” Szaky says. “Seeing the negative, losing the delight on the positives, it’s an existential crisis for packaging at the moment, which is the perfect time to open and question all the foundations around it.”

Any potential success is a product of timing, Szaky says. “If you go back to the 1970s and 1980s, people were so in love with [packaging], you couldn’t foundationally have those discussions, because people didn’t see the problems. They had the love but not the negative.” Now, he says, everything is open to change.

“It’s a massive ask of these brands,” Szaky says, “to ask them to reinvent everything: how they account for physical product itself, how it’s filled, the entire economic backbone to it, so on and so forth. But now with this particular time where we are, those conversations are on the table. Enthusiastically.”

Innovation, of course, is always a question of timing. Changes in the collective consciousness make way for new opportunities to solve more fundamental problems. Are sufficient numbers of consumers eager enough to embrace the motivation behind the innovation? Are we ready to reassess some of the fundamental assumptions of capitalism?

O’Brien would like the industry to go deeper, like Seal the Seasons and TerraCycle have. “The invitation is to really think of the entire supply chain, the entire sourcing process, and think about ways we can do this in a smarter, more holistic way,” she says.

“That’s the higher calling. I mean, that’s really what we’ve been called to do in the industry, is to innovate on the food system, not just the food product.”