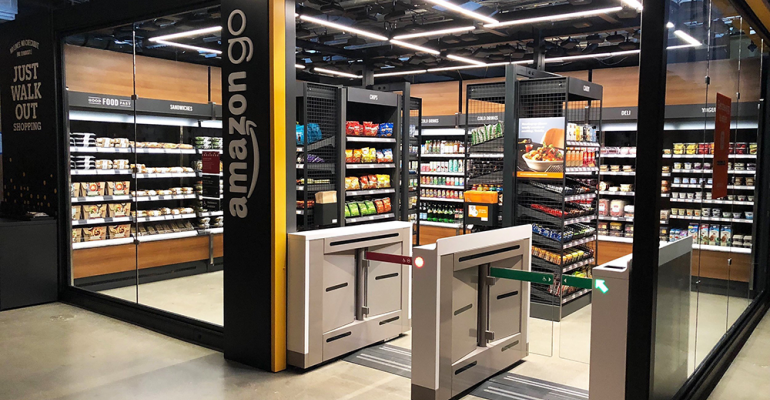 Amazon.com Inc. has signaled another opportunity for expanding its cashierless Amazon Go stores with the opening of a 450-square-foot outlet in Seattle.

The mini store, which opened its doors Wednesday, is on the sixth floor of the Macy’s building at 300 Pine St. in downtown Seattle, Washington, where Amazon has an office. About a quarter of the size of previous Amazon Go locations, the new venue serves Amazon employees and their guests only.

Amazon Go stores employ Amazon’s “Just Walk Out” technology. Overhead cameras, weight sensors and deep learning technology detect merchandise that shoppers take from or return to shelves and keep track of the items selected in a virtual cart. Shoppers use the Amazon Go mobile app to gain entry to the store through a turnstile. When customers leave the store, their Amazon accounts are automatically debited for the items they take, and a receipt is sent to the app.

Given the latest Amazon Go’s compact size, the format could work not only in office buildings but also in such settings as hospitals and airports, according to retail industry observers. The existing stores operate as stand-alone convenience stores. Earlier this month, a Wall Street Journal report said Amazon is testing cashierless checkout in larger store spaces.

“We’re excited to introduce a new small-format Amazon Go that is freestanding and can be as compact as 450 square feet,” the representative said in a statement yesterday. “Our first of these stores opened today for Amazon employees and their visitors in Seattle.”

Including the new store, Amazon now has eight Amazon Go locations: four in Seattle; three in Chicago, Illinois; and one in San Francisco, California. The stores range from 1,200 to 2,300 square feet.

Three other Amazon Go outlets are being planned for San Francisco, Chicago and New York City. The San Francisco store is slated to open this winter, and the Chicago store in 2019. Amazon has confirmed plans for a New York location but declined to provide any details.

Bloomberg reported in September that Amazon may open as many as 3,000 Amazon Go stores by 2021, including 50 locations in key metro markets during 2019.

Paid Content
What to look for in a trade promotion partner – article
Oct 18, 2022

Paid Content
“I and love and you” offers health-promoting meals and treats for pets with their own unique personalities and preferences­ – snapshot
Oct 07, 2022