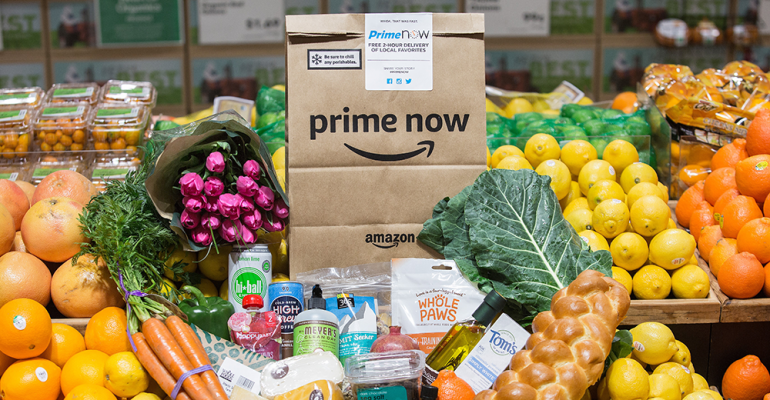 Same-day service gets under way at 13 new metro markets.

Amazon.com Inc. and Whole Foods Market have announced their second expansion of Prime Now online grocery delivery within the past month.

Amazon Prime members can shop thousands of items for delivery from Whole Foods, including fresh and organic produce, bakery, dairy, meat and seafood, floral and daily staples. Select alcohol is also available for delivery to customers in Destin and Tallahassee, Florida; Greensboro and Wilmington, North Carolina; and Palm Desert, California.

With the addition of 13 new metropolitan areas, Prime Now same-day delivery is offered through Whole Foods stores in 88 U.S. markets, with more to come this year, the companies said. In April, Amazon and Whole Foods had kicked off Prime Now delivery service in nine new markets and expanded Prime Now Pickup to 30 metro areas overall.

Broader geographic coverage for online delivery is key to Amazon’s omnichannel strategy in grocery and other retail segments. The Seattle-based e-tail giant has seen slow sales growth on the brick-and-mortar side. Last week, Amazon reported that sales at its physical stores—including 500 Whole Foods supermarkets plus a fleet of Amazon bookstores, pop-ups and cashierless Amazon Go convenience stores—inched up 1% to $4.3 billion for the first quarter. That figure, however, excludes orders made online.

Amazon also has tried to spur online and offline grocery sales via another round of price cuts at Whole Foods, including lower prices on certain items for all customers and more weekly deals across departments for Prime members. Reductions enacted in early April lowered prices by an average of 20% on select items throughout the store, according to the company.

“More Prime members have adopted the Whole Foods benefit than almost any other benefit we’ve offered them,” Amazon Chief Financial Officer Brian Olsavsky told analysts in the company’s first-quarter earnings call. “And they’re saving, as a result, hundreds of millions of dollars. We continue to expand the coverage for delivery.”

Amazon also is angling to offer faster delivery. The company said it plans to spend $800 million in the current quarter to bring free delivery times for Prime members down to one day from two, which Olsavsky noted will increase the number and types of products customers are willing to buy from Amazon.

Slow growth for Amazon in-store sales, but online delivery is up
Apr 30, 2019