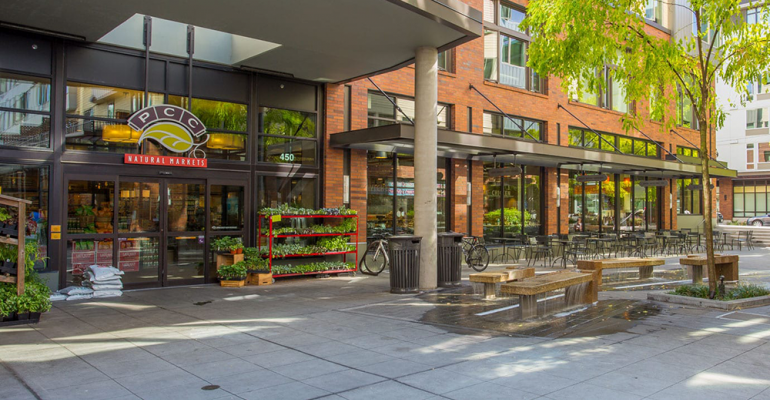 According to the company, the Living Building Challenge is “the world’s most rigorous green building standard” and is organized into seven performance areas: Place, Water, Energy, Health & Happiness, Materials, Equity and Beauty.

“We set high standards for the food we allow on our shelves and we believe that our stores should be held to equally high standards,” said Brenna Davis, PCC’s VP of social and environmental responsibility. “In partnership with the International Living Future Institute, we are reimagining how grocery stores are built—using less water and energy, designing refrigeration systems that have a reduced climate impact, utilizing building materials that protect human health and creating spaces that nurture a deeper sense of connection to the environment and our community.”

The community-owned food market will pursue three of the seven Petals—Place, Beauty and Materials—as required for Petal Certification across its five new stores in Ballard and West Seattle, opening later this year, and Bellevue, Downtown Seattle and Madison Valley, opening in 2020. PCC Community Markets currently operates 11 stores in and around the Seattle area.

PCC will accomplish its Petal certification through the following initiatives:

PCC also announced that its Burien, Washington, store, which opened in May 2018, is the first grocery store in the U.S. to be certified under the new Leadership in Energy and Environmental Design (LEED) v4 program for exceptional design, construction and operation of a “green” building. The company’s Redmond, Washington, store was the first grocery in the U.S. to receive LEED Gold Certification when it opened in 2006.

In addition to its green building standards, PCC Community Markets has a long history of environmental and sustainability leadership. The company eliminated plastic bags in 2007 and converted to compostable cutlery, cups and straws in the last couple of years, and recently expanded its commitment by pledging to eliminate plastics from its delis by 2022.

“We were founded by a group of people who had a clear vision, they wanted more than just a place to shop, they wanted a place that had impact in the world and really beyond just the Pacific Northwest,” said CEO Cate Hardy in a February interview with Supermarket News.“So some of the decisions we’ve made, I think we’ve hit above our weight class in certain ways. We, for example, banned plastic bags in our stores in 2007 while the city of Seattle only did it years later. In most parts of the country, that’s still a relatively progressive idea.”

The company just released its 2018 Co-op Purposes Report, capturing its progress against its social and environmental responsibility commitments as well as the co-op’s 2018 financial results. Accomplishments of note include purchasing 100% renewable energy offsets for its 11 stores, achieving carbon-neutral store operations and donating more than 430,000 meals to neighbors in need.