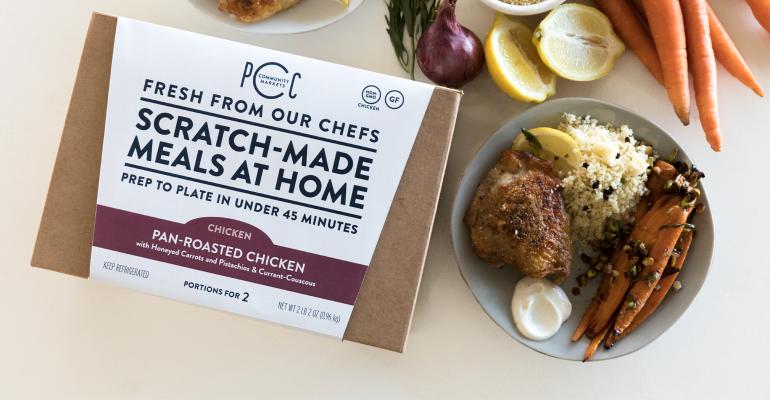 Meal kits' subscription sales model seems to be intractable. Grocery stores and meal-kit companies are increasingly working together to benefit both.

Appealing to consumers’ ever-growing need for convenience, meal kits have exploded, with the industry valued at more than $1.5 billion, says Packaged Facts. Research and Markets estimates the market will continue to grow, reaching a CAGR of 20.51 percent in 2022. But the costs and logistics of selling meal kits via subscription are proving difficult. As a result, many meal kit companies are working with retailers to  offer all the convenience of a meal kit without the commitment of a subscription.

HelloFresh is bringing its meal kits to Giant Food and Stop & Shop stores, reaching a total of 581 retail outlets, it announced in June. Kits include recipes such as Chickpea Couscous, Paprika Chicken, Peppercorn Steak, Mediterranean Style Chicken and Homestyle Meatloaf. Each meal kit contains pre-cut, pre-measured and pre-washed ingredients, and serves two people. Available in the deli section, prices range from $14.99 to $19.99.

Albertsons acquired Plated during the summer of 2017 but plans to roll out the meal kits to hundreds of stores this year. They already are available in some Northern California Safeway stores and Jewel-Osco stores in the Chicago, Illinois area. The kits also will be offered at Vons, another Albertsons store brand, according to CNBC. Kits will include recipes like crunchy Chicken Milanese With Honey Mustard And Arugula, and Roasted Chicken Au Jus With Orzo And Peas.

In May, Blue Apron began its foray into retail with a Costco partnership that brought meal kits to San Francisco stores, as well as outlets throughout the Pacific Northwest. The program has since expanded to about 80 stores in a variety of regions, according to The Wall Street Journal. The kits cost about $24.99 for four servings, and they reportedly are easier to prepare than the kits offered through Blue Apron’s subscription service.

Walmart makes its own

Walmart recently created its own meal kits, to be available in more than 2,000 of its stores over the course of 2018. Mimicking the pre-chopped and pre-measured kits popularized by online purveyors, Walmart’s offerings will serve two for the cost of $8 to $15 per kit. Varieties include Steak Dijon, Basil Garlic Chicken, Sweet Chili Chicken Stir Fry and Pork Florentine, and its Thai Curry Chicken and Chicken Fried Rice recipes will customize the retailer’s ready-made rotisseries.

In May, Kroger Co. reached an agreement to acquire Home Chef, which would bring the meal kits to Kroger stores across the country and online. It’s not clear when the deal will close.