HomeBusiness ResourcesRetail and DistributionThe Road to Natural: Activism in the aisles
Recent
Latest
6 tips to promote consumer understanding of Certified Organic
May 18, 2022
Sponsored Content
Balanced Health Botanicals Newsletter – May
Getting ready for 2023: Trends for brands to consider
May 17, 2022
EXPO VIDEO: How did a young sparkling water brand get licensing deals with Marvel and Disney?
May 16, 2022
Trending
Debra Stark’s light shines bright on natural products industry
May 10, 2022
Unboxed: 7 plant-forward ice creams to stock this summer
May 10, 2022
Hemp CBD industry struggles so far in 2022
May 10, 2022
Monitor: Consumer research on collagen shows how much education is needed
May 12, 2022

The Road to Natural: Activism in the aisles 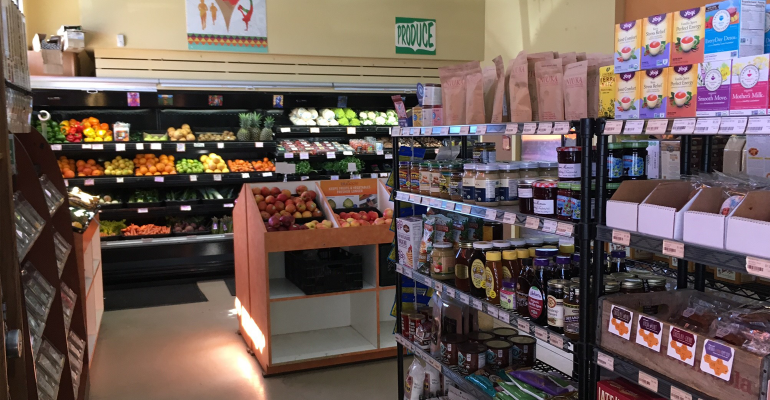 On the fourth day of the drive from Seattle to Anaheim for the third Road to Natural series, we visit Bay Area markets to learn how natural retailers rally consumers to action.

Mark Squire points to a hillside visible through the towering windows of the Good Earth natural food store he founded more than 50 years ago in the quintessentially northern California town of Fairfax. “I had a teepee on top of that hill,” he says, recalling moving to the area in 1968 with his brother. “That’s where I lived.”

Of course, 1968 was a very different time and Squire will say that simply shopping at his Marin County store before organic and natural foods were mainstream was a kind of activism. “I was sort of this hippie foodie and organic food really became our cause.” But that hasn’t entirely changed, he insists. In many ways, the act of buying responsibly grown and produced food has even greater sway than it did when he was the “one of a couple dozen retailers up and down the coast sort of doing this new thing with natural food.” Politicians take natural grocers a lot more seriously than they did when Squire was “a hippie weirdo” living in a teepee.

He watched that change happen.

Squire worked on the California Certified Organic Farmers program that set the stage for USDA Organic standards. He was part of the 2004 effort that had Marin County voters following Mendocino County as the second county to ban GMO crops. “We were sitting around and we heard the news about Mendocino and we said “Ooh we can do that,” he says, recalling how he brought his store to the fight, paying his workers to gather signatures and reaching out to customers about the issue. “I was on the news and we were the center of a media campaign."

Squire had engaged in multiple causes over the decades in retail, but the GMO fight brought home for him the unique role that retailers can play in politics around food and the environment. “One of the things I got out of that is how much a political campaign is an educational campaign.”

It’s mid-morning when we meet Squire in his store. The parking lot is full. The cashiers are busy. He can look up the aisles and know that he touches the community in a way that few other business can. He doesn't see his customers occasionally. He sees them several times a week. Retailers, especially natural channel retailers, he says, have a unique power to make change. Consumers come to natural retailers because they trust them. Consumers don’t walk into Walmart or Safeway looking to be educated. At Good Earth, education is part of the transaction.

That trust and education can light fires. The Marin and Mendocino GMO votes started the movement that led to California Prop 37 GMO labeling measure. That failed, but it launched, Squire says, “a huge conversation about GMO issues across the country.”

A conversation that started or at least got repeated in the aisles of stores like Good Earth.

On mission in the Mission

We reach Bi-Rite Market just before noon. San Francisco’s Mission District may be arguably post-gentrified but the street scene retains much of the vibrancy the city is famous for. Sam Mogannam is waving to familiar shoppers and passersby.

When he was a child running up and down the aisles of the store his family started in the same location 54 years ago, he wasn’t thinking about politics. The shoppers weren’t thinking about organic and clean foods either. But both Mogannam, his family and the shoppers were part of something that he sees as a central mission to Bi-Rite. The power of retailers, he says, is community.

And he’s ready to use that power whenever he can. Like Squire, he will say the organic grocery business is inherently political and that his customers “are participating in an activist kind of behavior on a daily basis, every single time they eat.” But he is also ready to wade into debates about a living wage, women’s issues and immigration reform. He spoke up for worker welfare. He launched Bi-Rite’s education program, 18 Reasons, to bring nutrition education to underserved communities.

With his store, his Eat Good Food book and a TED talk, Mogannam has put himself in a leadership position but he believes his customers, whom he refers to as “guests,” are hungry for that. “Just seeing their enthusiasm is a sign that they want us to take a leadership role,” he says. “They need us to be a voice for them.”

That’s part of what worries him about mass market chains moving into natural and organic and developments like Amazon’s purchase of Whole Foods. Natural food retailers have an opportunity, and maybe an obligation, to lead on social and environmental issues, but mass market stores show little interest in anything that’s not directly related to the bottom line. “They’re all fighting each other on price, but they’re not fighting at all on issues like staff welfare or really any of the issues that I think are important.”

But Mogannam doesn’t see defeat. He sees a growing awareness and a growing opportunity for grocers to create change. Consumers have access to more information and retailers can connect in new ways. In the 1960s, Mogannam, his family and their customers weren’t fighting for all the issues Mogannam cares about now. But they had community. Community is communication,” he says. “Community is power.”

Thay may be more true now that it ever was.

“That’s how good change happens,” he says. “It’s really the only positive change can happen."

James Bell and the other co-founders of the Mandela Food Cooperative didn’t wait for change to come to the West Oakland neighborhood where they sell natural and organic fruits vegetables and a thoughtfully conceived selection of clean label products.

They put that change on the shelves.

West Oakland has all the makings of a classic urban food desert. It is a landscape where the residential bleeds into the industrial and the crime rate is notoriously high. Liquor stores abound and healthy food is largely missing from the menu of local eateries and the shelves of area grocers.

The Mandela Food Cooperative is the gleaming exception. Despite a tiny footprint no bigger than a convenience store, the shop has a healthy ambition. Here the produce is organic, or at least pesticide free. Vegan products abound. Low-sugar drinks are the norm. In a way, the shop is making a political statement, but Bell insists that politics and food are two different subjects. Or at least they should be. “Some people would argue this point, but from my viewpoint, at least, there is no politics involved when you’re talking food,” Bell says. “No one should be able to connect food and politics. They just don’t go together.”

Bell will say that the getting food to people isn’t something that should be debated, politically or otherwise. It’s a simple matter. “Need,” he says. “Is need.”

But the commerce of natural food and healthier products is a different matter. The natural products industry, he says, needs to recognize a huge market that it is ignoring. It needs to look at where the need he speaks of is highest and go there. Going where the needs are should be the action that comes before activism.

“This shop is a testament to me and it shows me that if there are resources in an area and it’s there for peole to use and people are educated about the way they should eat a particular food over something that’s not healthy, a lot of times they will chose something better,” Bell says.

Healthier options and healthier stores should not be exclusive to privileged zip codes. The natural products industry is ignoring neighborhoods where it could do the most good. “If its not available then there is no way to choose anything better,” he says.

The Mandela Food Cooperative may look like a political statement, but it’s really a simple matter of putting the right food in the right place. That’s not politics, Bell says. That’s need.