HomeBusiness ResourcesRetail and DistributionWhy having a good co-packer is essential to getting on QVC
Recent
Latest
Podcast: Innovation, sustainability and integrity at PCC Community Markets
May 18, 2022
Whole Foods' honors 30 companies with 10th annual Supplier Awards
May 18, 2022
EarthX Film Festival focuses on healthy food, sustainability
May 18, 2022
6 tips to promote consumer understanding of Certified Organic
May 18, 2022
Trending
Debra Stark’s light shines bright on natural products industry
May 10, 2022
Unboxed: 7 plant-forward ice creams to stock this summer
May 10, 2022
Getting ready for 2023: Trends for brands to consider
May 17, 2022
Hemp CBD industry struggles so far in 2022
May 10, 2022 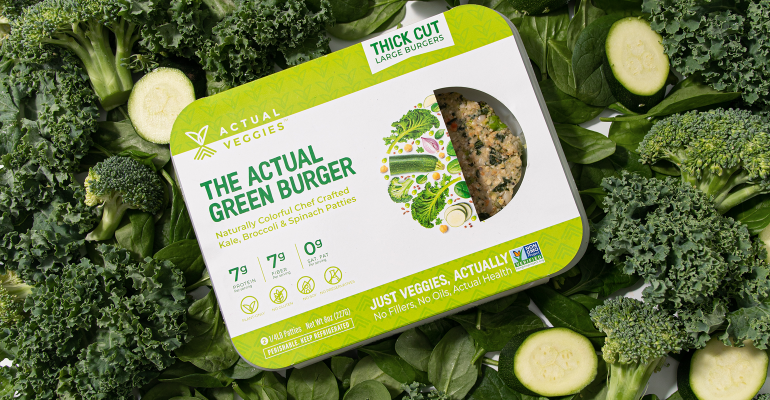 Learn how a chef-crafted veggie burger got into a venture-backed accelerator and onto QVC.

Just as the pandemic was starting to hit last year, Hailey Swartz and Jason Rosenbaum, co-founders of Actual Veggies, took their idea for plant-only burgers to the Healthy Food Expo in New York.

“It was probably the last trade show in the U.S. before COVID,” says Swartz, president of Actual Veggies, a brand now known for its non-GMO verified vegan burgers. “It was our first foray and literally the last event we went to.”

That’s when Rosenbaum, CEO of Actual Veggies, and Swartz met the founder of Revolution Gelato, an organic, dairy-free gelato, who told them to apply for Big Ideas Venture Accelerator in New York. Applications were due two weeks later.

“We applied on a whim,” Swartz says.

They had never shipped their burgers before.

“At that time, our formula wasn’t binding,” Swartz says. “It basically arrived at the door of the general partner looking like soup. The message we got back was ‘It looks like the U.S. soccer team kicked it all the way across the country. Not eating this.’” It felt like a missed opportunity.

“The coolest thing is they still took us on,” Swartz says. “They really believed in the vision and believed in our pain.”

Soon, Swartz and Rosenbaum found themselves in the second cohort of Big Ideas Venture Accelerator’s $50 million New Protein Fund, which focuses on alternative-protein companies who make products or develop ingredients to be used in plant and cell-based protein alternatives and technologies. By the end of the year, Actual Veggies had a secured a broker who worked with QVC.

In January, less than a year after launching their company, Joel Davis, chief culinary officer for Actual Veggies, was chatting it up with QVC host Kerstin Lindquist.  Seven and a half minutes later, Actual Veggies sold out of $75,000 worth of inventory.

Here’s what Swartz and Rosenbaum have learned and want other entrepreneurs to know.

How did you get connected with QVC?

Hailey Swartz: Big Ideas Venture Accelerator brought a broker to us who was from QVC. We ended up going with Diane Rubizhevsky, a broker who reached out pretty much at the exact same time. It was on our radar to do later, but it wasn’t something we had thought to do this early.

She reached out in mid-November and we found out on Nov. 30 we were going to be on the Jan. 8 show. So it was really fast and exciting.

Jason Rosenbaum: Diane found us at Pop Up Grocer. They go from city to city and were here for a month and like to feature new products. That was the first time our product was ever on shelves. That was October 2020 in Brooklyn. Diane found us and reached out to me. It was weird timing since we had just been introduced to other brokers a week before. But we went with our gut and felt a connection with Diane so we moved forward with her.

What has it been like to work with Diane Rubizhevsky, who is a well-known broker for QVC?

HS: She’s incredible. We couldn’t have done it without her. Being a new brand, she really helped us navigate everything. She reached out to Jason on LinkedIn and we could just tell her passion for this space. She is genuine and authentic. She’s calm and patient and a really good person to be around. When we talked to her references, all new companies she had taken on right in the beginning and helped them get on QVC. She’s doing something special and helps us along the way.

What did you learn from doing the Pop Up Grocer before going on QVC?

JR: I’ve recently moved to California, but at the time, Hailey and I were both in New York. So we literally were hand-delivering the burgers to Pop Up Grocer. We had to get in an Uber and replenish every single week.

HS: We were told to think of it as a nontraditional retailer, as more of a museum where people come once. But we exceeded their expectations on sales because we sold out and were one of their top sellers. The repeat order rate was higher than they’d ever seen. People were returning two or three times to get our burgers.

How did you prepare your supply chain to make sure you could actually do QVC?

HS: So, there was a minimum that they had expected us to do in sales and that’s what we did. Obviously, there’s a risk if they don’t take on any of that inventory. We’re really lucky that we actually sold out and there’s a waitlist still.

Besides the Pop Up Grocer, it was our first order so it made us get our ducks in a row. It was a crazy time. It was December, so the holidays, in the midst of a pandemic and we went from doing trials with our co-packers to doing a $75,000 run. It was exciting to make it all work. To get the boxes and cartons, order ingredients, to do our whole entire supply chain in a month’s period.

JR: QVC took two of our burgers: the Actual Orange Burger and Actual Black Burger. We had a month and we had to scramble to make sure we had all the ingredients, to do the packing and the boxes to ship in. It was stressful to do our whole entire supply chain in a month’s period.

That’s insane. What’s the minimum order you had to do with QVC?

How did you manage to get all of that produced so quickly?

HS: This is why you need an amazing co-packer. Because of trucking during the holidays, it became impossible to get our burgers to our B2C center. So our co-packers in Denver and our distribution center is in New Jersey. And it wasn't possible to get them there in time, based on the availability of trucks and everything going on with the holidays. Our co-packer turned into a distribution center for a week. Jason went there, printing labels, doing it all and shipping out. It was a really special experience and that’s why you need a co-packer that’s a real partner.

What do you wish you would have known about co-packers before starting?

HS:  Don’t try to make shortcuts with who you work with. For example, we were talking to several co-packers at the beginning. One was a little more expensive than the other ones. But they said they could work with us. The second one said, we can come in at this lower price but they weren’t going to be as hands-on.

We thought we could do it ourselves and went with the one that was a little less hands-on. Of course there was problems with the run. We were sort of taken advantage of and we weren’t helped. And the final product was inedible. We spent all this time and effort trying to make it work with these big guys who weren’t really going to grow with us.

At the end of the day, the money we spent on them, it would have been so much better to go with the ones who we had to go back to from the beginning. As we’re scaling, we’re already getting to a price that is better than the other co-packer. 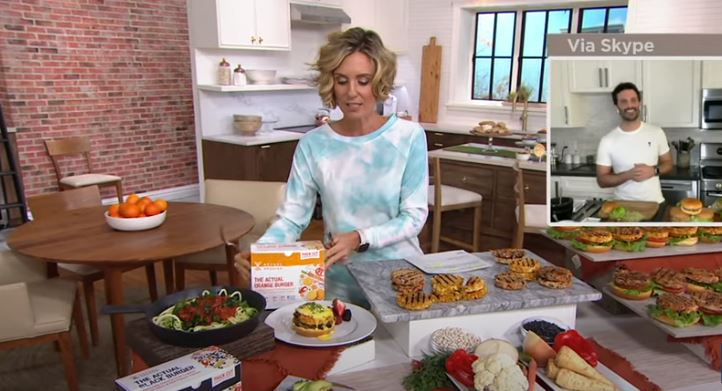 How did you know the co-packer was the right co-packer?

But it’s not an easy process finding a co-packer. A lot of them won’t even talk to small brands because they don’t anticipate the volume to be there.

The fact that we were venture-backed by Big Idea Ventures through that accelerator program really gave us a lot of credibility. We were introduced to co-packers by our investors. It really helped because co-packers have to take a risk on who they’re working with us because as a startup they don’t know how long we’re going to be around. It’s an investment on their part to just get up and running with us. So it’s trust both ways. The co-packer has to believe in what you’re doing.

Can you explain more?

JR: The first co-packers we tried working with, I don’t know if they really believe in what we were doing. They were a co-packer that didn’t make a lot of other products that were related to us, whereas our current co-packer in Denver [Aveno Antiguo], is really deep in plant-based and really believes in that.

HS: The owner of the current co-packer has become an advisor for us in the sense that we get on calls and they’ve had another veggie burger and he’s introducing us to his brokers, different accounts. He has a vested interest in seeing us succeed.

What else is important for other startups and small businesses to know about being on QVC?

HS:  One thing that is good to do is the inserts you can put into a box. It’s probably the first time these customers are going to see your brand. So make them feel part of that community. We included a card that had a direct way to communicate with me with any feedback.  And I was on top of that, if there was a problem or a compliment. Include stuff in the package to make it feel personal and make your customer feel loved.

What was some of the feedback you got from your customers?

JR:  It was kind of like a massive trial. There were tons of people trying our burgers. Not everything we received was positive. What’s great is we were able to react quickly and make changes. Some of the people said the burger wasn’t flavorful enough, it didn’t have enough taste. So our chef was able to go back to the drawing board and make some changes, up the spices and change some vegetables in there. We were able to make those changes at our co-packer. We sold 1,600 packages to 1,600 customers, so we got a lot of feedback. The negative feedback is what helped us the most.

What else did you learn?

What else are you changing next time around?

HS: We wanted to do this the first time, but we just didn’t have the time or resources. But this next time that unpacking experience is going to be even better. The outer box will be branded, it will be our color, it will have branded tape. That stuff to make it feel exciting when you get it.

How quickly did you have to ship out?

JR: We were on a Friday show. And I was out in Denver supervising the shipments, which we started shipping on Monday. So we pretty much got them all out on Monday and Tuesday. They all went two-day air. So customers got them Wednesday or Thursday. It’s a big quick turnaround and you have to be ready.