HomePeople and Company ProfilesHow one store's vegan ice cream contributes to a more 'peaceful planet'
Recent
Latest
4 tips to get ahead of chemical concerns in packaging
May 20, 2022
7 CBD favorites in the increasingly popular gummies format
May 20, 2022
Mission MightyMe helps parents introduce allergens to babies
May 20, 2022
UNFI's Eric Dorne to step down as chief operating officer
May 20, 2022
Trending
Whole Foods' honors 30 companies with 10th annual Supplier Awards
May 18, 2022
Getting ready for 2023: Trends for brands to consider
May 17, 2022
Sponsored Content
The rise of sustainable business – eGuide
Sponsored Content
Natural beauty market trends
Jun 16, 2021
Natural Foods Merchandiser
brought to you by

Brooklyn-based Perelandra worked with a local company to create an exclusive non-dairy ice cream with a charitable swirl.

Here, Perelandra’s vice president of operations and co-owner Allison Buckingham sheds light on the perfect storm that led to the creation of a new top seller: a great idea mixed with a fitting partner, and topped with a serendipitous opportunity to celebrate the store’s 40th anniversary, happening this year. The result is a unique product that exemplifies their commitment to better food and business.

Why did you choose Three Little Birds as a collaborative partner?

Allison Buckingham: Three Little Birds makes the best non-dairy ice cream on the market, in my opinion. I’ve been vegan for almost 20 years, so I’ve tried a lot of non-dairy ice cream, and theirs really blows the others out of the water. Their flavors are unparalleled, but they’re also super creative and always come out with new flavors. The people who own Three Little Birds are the sort of people whose values I really respect and connect with, and they run the kind of company that I want to support and that I was excited to collaborate with.

This is the first partnership like this we’ve done, so I wanted to work with a company that would be receptive but, beyond that, one that 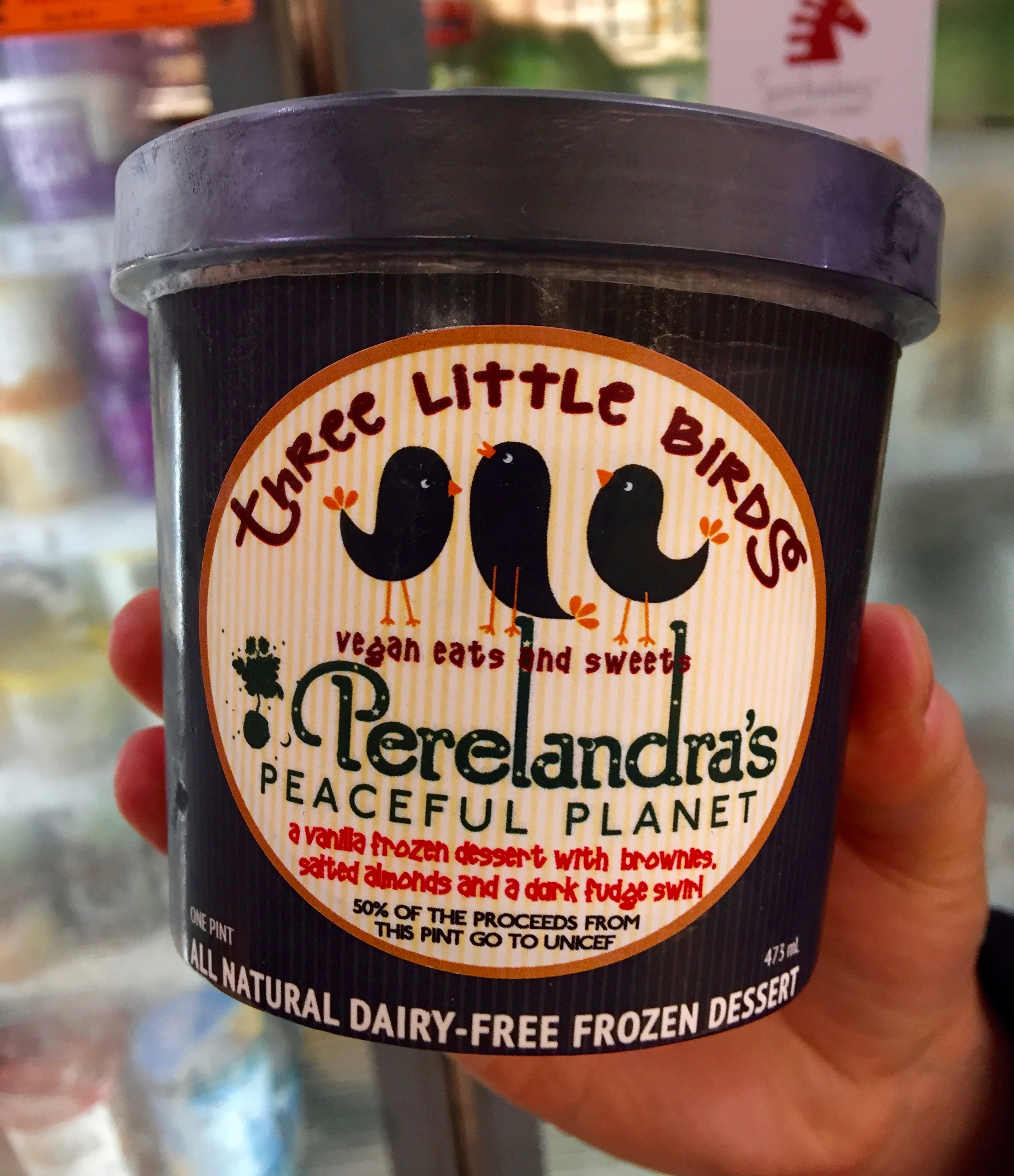 would also be supportive. Based on my interactions with Three Little Birds, I thought they’d be receptive to creating a flavor for us and, particularly, one that had a charitable element to it. And, they’re a local company.

Why was it important that they’re local?

AB: Practically speaking, I wanted to be able to sit down and talk with them. It was also important to work with a company that was small enough to be quality-focused and create the type of product I was envisioning. Three Little Birds was able to do that. They're definitely very successful, but they still operate on a small enough scale that they are extremely focused on the quality of the products that they're making. I’m not interested in having the Perelandra brand on a product I don't feel 100 percent about, and I knew that if they were making it, that I would feel great about it--and I do!

AB: I reached out to Three Little Birds about six months ago about this idea, but we’ve sold their products for several years now. Basically, I was just thinking about what flavors sounded interesting and I would ask friends, family and staff what they thought. I had the idea of including brownie chunks and a fudge swirl, and one of my managers suggested salted almonds. We all thought that sounded fantastic, so that’s what we went with. I approached Three Little Birds with the vision, told them we have a name and flavor, and that we wanted to give 50 percent of the profits to UNICEF. They immediately through it was really cool and wanted to do it.

Why did you decide to include a charitable component?

AB: An important part of our philosophy is giving back to our community, and it seemed natural to me that a component of our product would incorporate that. The Peaceful Planet name connects with the idea that we wanted to give back to our community and do something to create a more peaceful planet. And that's part of why I chose UNICEF. I feel very strongly that part of creating a more peaceful planet starts with taking better care of children, and I feel that very acutely now that I’m a mother of a toddler. UNICEF really does a lot to help and protect children, particularly those that are in conflict zones, so they are the recipient of the charitable portion of our sales.

How has shopper response been?

Why do you think it’s resonating with your shoppers?

AB: It’s just really great! It's a great combination of ingredients and flavors, but also, who doesn't want to feel better about something that they're eating? If you're going to buy ice cream, why not buy some ice cream where a significant portion--50 percent of the money we make on it--is going to an extremely respectable charity that's doing really good things in the world? So you can feel even better about eating ice cream.

This product is “P-approved.” What does that mean?

AB: If a product is P-approved, it means it meets my guidelines to be in the store: there’s no artificial colors, flavors, sweeteners, preservatives, hydrogenated oils or high fructose corn syrup. Those are the basic guidelines.

Another component is the Perelandra Promise. It's something that goes beyond P-approved. It’s our promise to be more thoughtful and critical in the decisions we make regarding the food we sell and the way we do business. A good example of that was last year, when we decided to stop bringing in new items that contain carrageenan. It doesn't mean we don't sell products that contain carrageenan--there are plenty of items on the market that contain it, and it's currently an acceptable ingredient in the National Organic Program. But since I have a degree in biology and a master’s in nutrition, I'm pretty well versed in sifting through research at this point, and the research on carrageenan isn't conclusive, but it’s pretty clear to me that at the very least it is likely to cause inflammation. It makes sense to me to avoid a food additive that would promote inflammation, so I decided to stop bringing in new items that contain it. I’ve actually had one smaller vendor reformulate a product after I discussed my concerns about it with him. That is a good example of the Perelandra Promise. It's not just the basics. I try to be extremely thoughtful about all of the decisions we make, whether it's the food we sell or the way we do business.