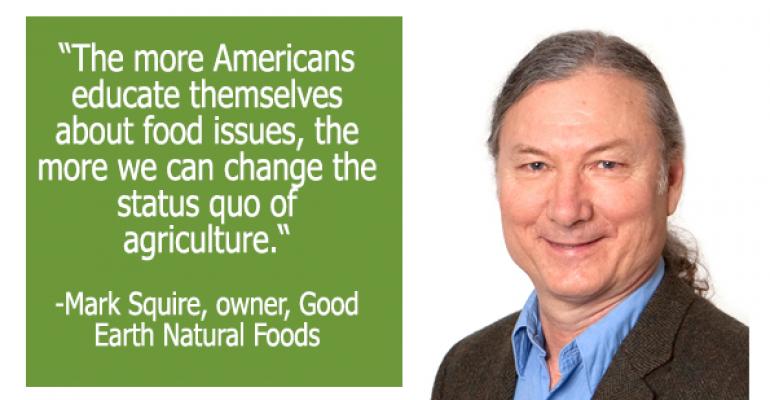 The owner of Good Earth Natural Foods, one of three stores that began the Non-GMO Project, says retailers "can be leaders on any number of other important food issues." 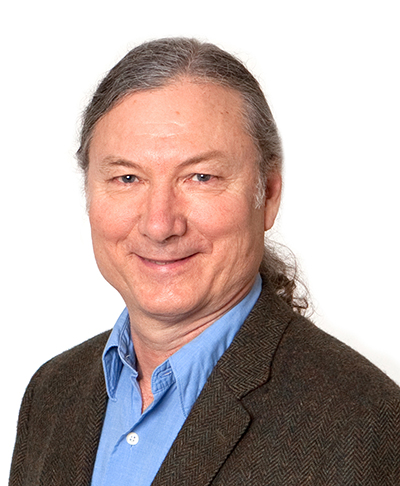 In 1969, 16-year-old Mark Squire quit high school in Connecticut to journey west with his brother. Inspired by Rachel Carson's Silent Spring and Jethro Klossa's Back to  Eden, he yearned to get involved with something that espoused these ideals. The brothers landed in northern California because, "frankly, the ocean stopped us from going further," Squire says with a laugh. That may have been, but they'd also stumbled upon the seedlings of the organic food movement and knew instantly they wanted in.

The Squires began working at Good Earth Natural Foods in Fairfax, a brand-new and revolutionary-for-its-time store that championed local and organic food. Before long, they were running the show and bought the business a few years later. Today, Good Earth is going strong—a second location opens in Tam Valley this March, and Squire is more passionate than ever about healthy, organic and non-GMO food. NFM chats with the legend about those early years and the most pressing issues facing us today and tomorrow.

What was it about Good Earth that drew you in as a teenager?
Mark Squire: In those days, you could count on two hands the stores up and down California that understood organic. Not many farmers were growing organic either, so it was all new. We saw the beginnings of an organic business network, and Good Earth was certainly part of those origins. It was so exciting to see the ideals I'd been reading about actually turning into a food system.

How has your store evolved since 1969?
MS: Originally, it was just a small hole in the wall, all of 2,000 square feet. We kept expanding until weâ€™d maxed out, then in 2000, we moved to another building that gave us 8,000 square feet. Three years ago, we moved into our current location. Now we're a full-service grocery and about 20 percent of our business is foodservice. But what really makes us unique is our focus on organic—you probably won't find a more organic-oriented store. It varies by department, but our regular grocery aisles are about 95 percent organic.

How has the industry as a whole changed? What are the most significant advancements?
MS: To me, the most positive change is the increased availability of organic food. Early on, there was a lot of â€œnaturalâ€ food that wasn't organic, largely because of lack of availability. It's exciting that you really can eat all organic now. You might pay more, but it's an investment in your health that you'll earn back in the long run.

Because Marin County is so educated and progressive, do you need to do much education in and out of the aisles?
MS: Oh, we are constantly doing education. We view that as one of our chief jobs. Although our customers are among the most knowledgeable about organic issues, the more you know, the more there is to know, so we always try to be on the cutting edge. Customers ask us some pretty sophisticated questions, like where GMOs are appearing. They want to discuss topics that are very high-level conversations in the organic world.

You're very involved in GMO issues. What are you working on now?
MS: We were one of the three stores that began the Non-GMO Project, and I'm currently on the board. Obviously, a lot of recent efforts have been aimed at defeating the DARK Act, because that would screw up a lot of local labeling plans. Right now, we're trying to help Sonoma County become GMO-free like Marin and most other counties in our region, so we're collecting signatures to get that put on the November ballot.

Will there be another GMO labeling initiative on any upcoming state ballot?
MS: I'm part of a group that looked very actively at this, but we decided not to try for 2016. It's a possibility for the future, for sure, but we just feel the time isn't right. I've learned that ballot measures are always about education when the vote happens, you hope the education has been done adequately so you get the votes. After Prop 37, the biotech industry took the results very seriously and got really worried. We saw this play out very obviously in the media. The industry invested huge amounts of money into convincing consumers they needed GMOs. We saw two years of really slick PR, and you have to 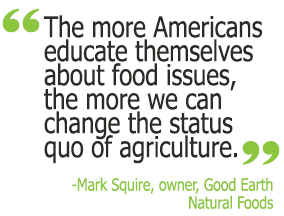 admire the agency's skill at spinning the storyline. We realized we'd better go back to the drawing board and figure out ways to counter. We need to get better at telling our story.

What are some ways you're doing this?
MS: We've devoted a lot of energy over the past year toward creating an educational website, gmoscience.org, which meets the need for solid science on GMO issues. A lot of the â€œscienceâ€ behind GMOs is lies. The biotech industry keeps pounding out the message that GMOs are the most studied things out there, but if you look at the data, thatâ€™s absolutely not true. They also say GMOs are key to feeding the world's hungry, but that's not what research shows. The fact that we don't yet know enough about GMOs is important, and we want to make that point. We're also working to collect all the science that actually exists.

Do you think the uptick in food allergies is leading more folks to question GMOs?
MS: Allergies have taken a front-row seat in this conversation. As a retailer, I'm in a good position to have watched them become so prevalent. I'm just floored by how they were once so rare and now have gone through the roof. I'm convinced many food allergies are directly connected to GMOs, but we obviously need more science. Unfortunately, people often need to experience a concrete health problem to be motivated to action, and allergies are definitely driving people to look more closely at their food. The more Americans educate themselves about food issues, the more we can change the status quo of agriculture.

Is the education role one that independents can—and should—keep playing in the future?
MS: Independents have always been the ones pushing the envelope in terms of the food supply. Retailers made the organic revolution happen. It came from being in the aisles day in and day out explaining these issues to customers. And although organic is a very important bar that we've set, we can't rest on our laurels. Even if the whole world becomes organic—which I think could happen, perhaps this next century—we can be leaders on any number of other important food issues.

Are there any particular issues on the horizon that retailers and consumers should be aware of?
MS: One of the most interesting things occurring that I don't think there's enough discussion around is synthetic biology. Some have called it 'GMO 2.0'€ or 'GMOs on steroids.'€ All these companies are developing bacteria that can spit out vanilla and other flavors, and I think they see it as a way of taking over flavoring markets. I'm very concerned about the political and farmer implications of this worldwide, because if you look around the world, it's high-value crops like vanilla and saffron that have helped farmers hang on.

Everybody in the food industry needs to understand that synthetic biology is the latest thing coming down the pike. This is like GMOs in that an industry is trying to shove it down our throats as fast as possible before we even know it is happening. We must educate ourselves and not just give in.