HomeProducts and TrendsVitamins and SupplementsDid FDA just kill off the CBD market?
Recent
Latest
4 tips to get ahead of chemical concerns in packaging
May 20, 2022
7 CBD favorites in the increasingly popular gummies format
May 20, 2022
Mission MightyMe helps parents introduce allergens to babies
May 20, 2022
UNFI's Eric Dorne to step down as chief operating officer
May 20, 2022
Trending
Whole Foods' honors 30 companies with 10th annual Supplier Awards
May 18, 2022
Sponsored Content
The rise of sustainable business – eGuide
Sponsored Content
Getting ready for 2023: Trends for brands to consider
May 17, 2022
Sponsored Content
Debra Stark’s light shines bright on natural products industry
May 10, 2022

Did FDA just kill off the CBD market? 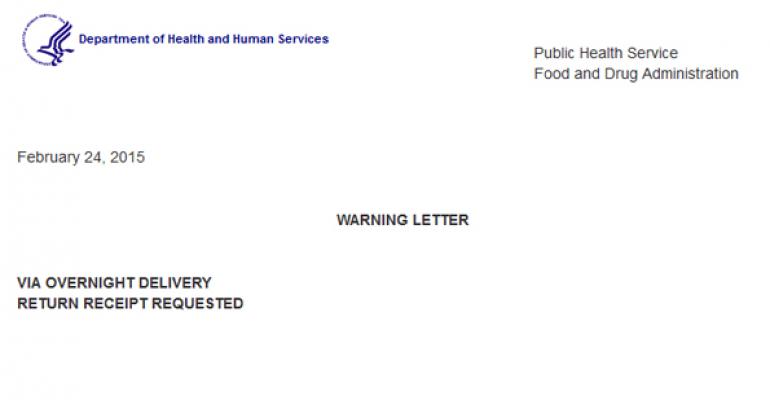 The latest chapter in the non-psychoactive CBD world has the federal rules pointing to pharma supremacy.

The U.S. Food and Drug Administration may have stopped the burgeoning CBD supplements market dead in its tracks on Monday when it issued warning letters to eight companies, from California to Michigan. In the letters, the agency ruled the companies are selling 22 different cannabis-derived CBD products in violation of federal law.

Related: The hemp/marijuana revolution: A testing ground for supplements to get it right?

The companies were guilty of two relatively minor infractions but one huge one. First, many were marketing “unapproved new drugs” because the companies were making drug claims instead of the structure/function claims that are allowed for supplements.

One company, Healthy Hemp Oil, based in Austin, Texas, made claims on its CBD oil that it could “alleviate anxiety,” help heart disease and diabetes, and has “anti-cancer properties.” Such claims are in violation of the 1994 Dietary Supplements Health and Education Act (DSHEA), which states that supplements cannot claims to "diagnose, treat, cure or prevent" any disease. Healthy Hemp Oil could not be reached for comment.

Related: CBD: No high, but lots of buzz

The FDA also took the unusual step of testing the products for cannabidiol content. Almost all of them failed—though Healthy Hemp Oil’s Herbal Renewals 25% CBD Hemp Oil Gold Label passed this part of the test.

But the potential death knell for CBD as supplements is the federal Food, Drug and Cosmetic Act rule that while natural ingredients can be supplements first and then later become drugs—as with the Lovaza brand pharmaceutical fish oil concentrate—once a drug has been recognized by the FDA, it can never become a supplement.

And it turns out that GW Pharmaceuticals, based in the U.K., gained Investigational New Drug (IND) status and conducted a clinical trial on a CBD product in 2007, which allows a fast track for compounds for rare diseases where patients do not respond to any other conventional medicines. One GW Pharma product, Sativex, is 2.7 mg THC (the cannabinoid that gets you high) and 2.5 mg CBD. Another product, Epidiolex, is all CBD.

“I understand that it was part of the compromise when DSHEA was enacted,” noted Alice Mead, vice president of U.S. professional relations for GW Pharmaceuticals. “It was between protecting the resources involved in pharmaceutical development and prescription meds and balancing that against legitimate dietary supplements, so if an IND underwent clinicals that were publicized, then dietary supplements couldn’t do an end run around it.”

In the warning letter to Healthy Hemp Oil, the FDA explained that all doors appear to be shut down. “There is an exception,” wrote the FDA, “if the substance was marketed as a dietary supplement or as a conventional food before the new drug investigations were authorized; however, based on available evidence, FDA has concluded that this is not the case for CBD.”

The FDA first issued an opinion on the subject of CBD supplements in May 2015 when it said it did not believe they counted as supplements. However, there was no enforcement action around its online opinion. This led to controversy at Natural Products Expo (disclosure: A New Hope Natural Media event, as is this website) because many CBD makers wanted to exhibit at the show, and didn’t think the FDA had officially meant CBD to be unavailable as supplements. No more.

This FDA decision is not being met with unanimous obedience, however. CV Sciences (formerly CannaVest), manufacturers of PlusCBD Oil and not a recipient of an FDA Warning Letter, asserts that the FDA is misinformed about the chronology of CBD as a supplement versus a pharmaceutical. If this is true, CBD could continue apace.

“It is our opinion, which is broadly shared by the marketplace,” said Sarah Syed, director of marketing at CV Sciences, “that CBD has been marketed as a dietary supplement prior to commencement and public notice of any substantial clinical investigations instituted on CBD, as the investigations that were publicized were not substantial, due to being limited in number and preliminary in nature, thereby rendering the IND preclusion inapplicable.”

An official CV Sciences release, which can be seen in its entirety here, notes that other supplement ingredients in the past—red yeast rice, trans-resveratrol, P5P, NAC and DHEA—have similarly been subject to the same scrutiny and yet continue to be sold as dietary supplements.

Furthermore, Syed noted that CV Sciences’ CBD product—a top seller nationwide—did not receive a warning letter. And that’s because products make no health claims, are strictly standardized so there would be no failed tests and, perhaps most importantly, are not even marketed as cannabis.

Playing the cannabis card is certainly enough to rally the troops, who have legalized marijuana for medical purposes in 23 states plus Washington, D.C., and flat legalized it for “recreational” purposes in four others plus D.C.

But the FDA is playing it cool by simply saying it is reading the statutes and does not see where a CBD supplement was on the market before 2005 when GW Pharmaceuticals petitioned for IND status.

“What CBD was explicitly and lawfully under federal law marketed as a food or dietary supplement before Sativex?” asked GW’s Mead. “I think you’d be hard pressed to find one.”

Under the IND statute, GW is testing its pharmaceutical CBD for two conditions, both catastrophic child-onset epilepsies, Dravet Syndrome and Lenox-Gastaut Syndrome. The former gained notoriety for CBD when a strain of cannabis called Charlotte’s Web was found to help children with epilepsy.

GW hopes that three additional study results will be completed in 2016, with a new drug application petition to the FDA by the end of the year.

“We’re not banking on FDA enforcement action to create our market,” said Mead. “We have to create it with our own data.”

Yet also at play is whether the company’s 50/50 THC/CBD product, and its 100 percent CBD product, would allow for other companies with other CBD-based products at different percentages to be allowed on the market. Such is the difficulty of working with plant-based substances in a plant that’s full of gray areas.

GW’s Mead remains bullish and is confident the FDA would not allow those products with different ratios of CBD and THC. What’s more concerning to her is the FDA’s study results on CBD compositions where so many supplements did not have CBD levels in tested products that matched label claims.

“There’s a concerning aspect to it,” said Mead. “FDA sent the first warning letters out in February 2015, and half had no CBD. You have a vulnerable patient population and a lot have no CBD.”

This week’s enforcement action by the FDA has certainly sent shudders down the necks of many players in the CBD space. Elixinol, a Colorado-based CBD manufacturer of dietary supplements and a contract manufacturer for other companies, had not heard the word of the warning letters two days later. They remain cautiously optimistic they will be able to survive.

“It would be pretty disappointing if something bad were to happen,” said Chris Husong, director of marketing at Elixinol. “We ultimately want this to be a regulated product because we do everything right.”

And so the drama around CBD will continue. Nutritional hemp: Still legal, and hemp food companies are none too happy with the blurring of the lines they worked so hard to create to differentiate omega-3-rich hemp food products from stoner marijuana. This also brings up the regulatory divide between hemp and cannabis, and what legal classification of plant the various supplement companies are deriving their CBD from. (Not to mention that billions of dollars of ongoing marijuana sales are for flowers and products that contain CBD.) Pot for the fun of it is rapidly gaining traction as socially acceptable in a growing number of states, with as many as 14 states potentially voting or passing legislation to legalize it either recreationally or medically in 2016.

But for CBD, the liberalization efforts may turn the other way, with it available only in pharmacies as a prescribed drug. Of note, the warning letters from the FDA sent out this week represent the second wave of such objections, as the first wave of warning letters was sent out to six companies and 18 products almost exactly one year ago. Since then, CBD has really taken off, and in the broadest array of sales channels any product has yet seen—online, bricks-and-mortar, physician-only lines, as well as both recreational and medical marijuana dispensaries. Can the CBD toothpaste get put back in the tube? We’re about to find out.

[What do you think? Will the CBD market survive? Comment below.]