The state of supplement sales in 2014 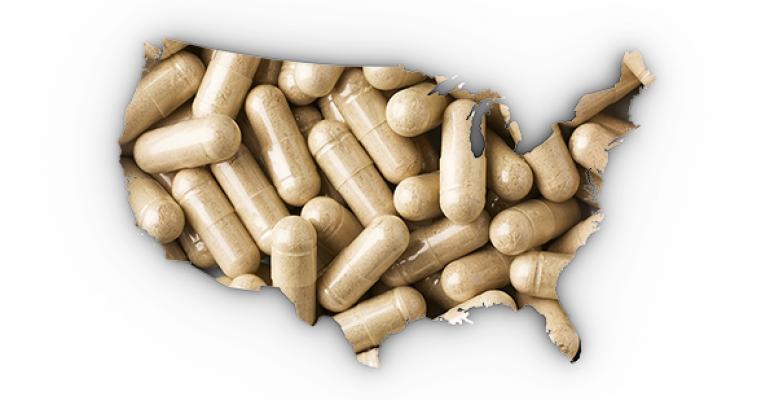 As regulation and customer changes collide, what will retail supplement sales look like in the future? 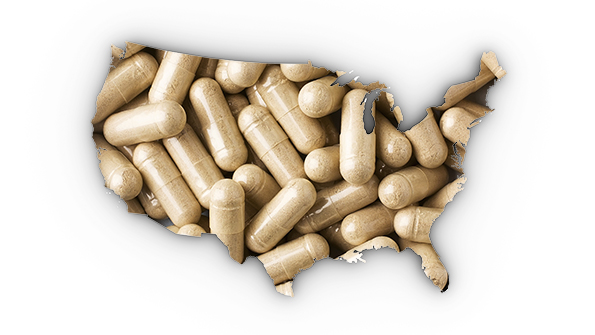 It has been 20 years since Congress signed the Dietary Supplement Health and Education Act into law. It has been a decade since ephedra was banned. Five years have passed since the beginning of the Great Recession. DMAA was blackballed a year ago. Is the dietary supplement industry moving forward or going in circles?

In many ways, today’s industry looks like yesterday’s. The market still hops from herb to herb and fad to fad just like it did in the late 1990s. Only now, instead of St. John’s wort and echinacea, it’s green coffee bean extract and açaí. We cascade through boom-and-bust cycles of miracle science and media criticism. When the market’s hot, investors take note, money flows and mergers materialize, just like in the boom years after DSHEA was passed. When the market cools, investor interest abates. Case in point: GNC experienced a 35 percent drop in stock price in 2014 after negative studies on multivitamins and omega-3s began to wear down retail sales. 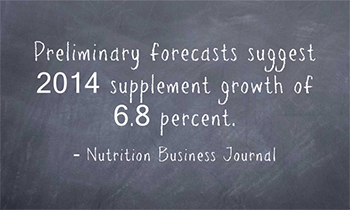 Nevertheless, the dietary supplement market is so varied and diverse that it has managed consistent growth throughout these schizophrenic years. According to Nutrition Business Journal, U.S. dietary supplement sales grew 7.5 percent in 2013 to reach $34.8 billion. Preliminary forecasts suggest 2014 growth of 6.8 percent.

It’s remarkable that a market so dependent on novelty continues to chalk up such strong growth. This trend really speaks to consumers’ mounting desire to take personal control of their health and to avoid putting faith in pharmaceuticals. It also speaks to the power of marketers and TV personalities to make fads out of dust—consider raspberry ketones.

While this industry may cycle through fads, regulatory hiccups and financial chess, several phenomena have mounted in recent years that could bring a potential sea change to the dietary supplement market. First off, the lines between drug and supplement continue to blur as the rise of personalized medicine and genomics has opened the door for democratized nutrition diagnostics. Additionally, regulatory stirrings, such as the Food and Drug Administration’s pending New Dietary Ingredient guidance, have the potential to push the industry toward a premarket approval model—one that more closely imitates the pharmaceutical industry. Finally, manufacturers and suppliers continue to be frustrated by the irrelevance of intellectual property in dietary supplements and bemoan the lack of measurable ROI for new nutrition science. These growing tensions have many wondering whether DSHEA is still the most relevant regulation this industry could have.

Or is there perhaps a better model that could be implemented in the not-so-distant future?

On top of these contentions, confusions and unknowns, we’re also seeing a fast-changing natural retail market, growing consumer concern about genetically engineered ingredients, and repeated media scares regarding economically motivated adulteration and negative science. As a result, we could be looking at a very different supplement industry in the next 10 years.

But first, let’s take a look at now.

A view into retail

In 2013, natural and specialty retail sales of dietary supplements hit $12.7 billion in the U.S. These sales come from natural products stores both large and small, as well as specialty supplement outlets such as GNC and Vitamin Shoppe. Mass market sales, through Walmart and other big-box stores and conventional grocers, hit $9.9 billion last year. So while natural and specialty still commands the market, mass is close on its heels.

Sales growth for supplements at retail was strong through most of 2013, but it began to slow through the end of the year and into the beginning of 2014 as a result of negative research studies and weather chilled retail sales across the Midwest and Northeast. And although growth has since rebounded, the supplement industry may be on the verge of a plateau unless a new blockbuster category jumps to the forefront.

But that seems unlikely—at least right now. “I don’t see a huge breakout item like coenzyme Q10 or glucosamine,” says John Rorer, CEO of Richard’s Foodporium, a chain of 18 small-format health food and supplement stores in Florida. Instead, he sees “lots of knockoffs and variations” of existing products that use borrowed science and borrowed claims. Weight loss and antioxidants are some of the biggest culprits. 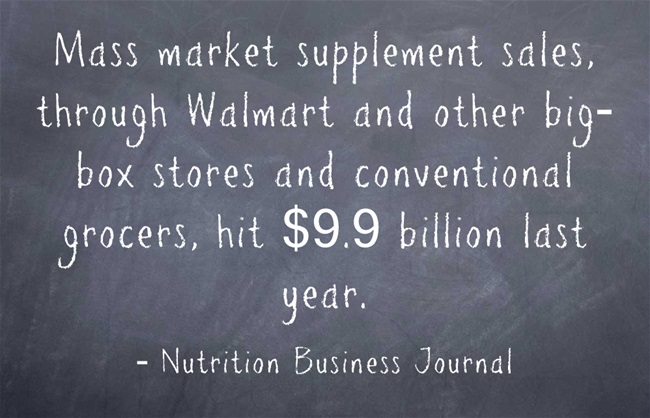 But other categories are flourishing. Protein is a star segment, although it comes with a host of pricing and supply chain issues. Rorer, whose stores make roughly one-third of their revenue from supplements, says that probiotics, anti-inflammation aids, mood enhancers, sleep supplements and energy products are all moving off the shelf well.

More than ever, retailers need to stay abreast of emerging science and trends to compete in such a diverse supplement market. They can’t expect to coast on the strength of a few standout products. Nor can they ignore the ever-increasing competition among supplement sellers, another hallmark of the last 18 months.

According to market analyst Scott Van Winkle of Canaccord Genuity, “Public retailers like Whole Foods Market, Natural Grocers and Sprouts have been underperforming because of competitive pressures.” Enemy number one: the Internet. The rise of online supplement peddlers means that even though sales growth looks diminished for retailers, manufacturers are enjoying heady days of distribution demand. So what incentive do supplement makers have to stand by retail? It remains to be seen how retail will hold up to outside pressure from the Internet and other faster growing channels in the supplement space.

A view into the future

The good news is retail is expected to remain the breadwinner channel for dietary supplements for the foreseeable future, according to NBJ. As for supplement sales channels outside of brick-and-mortar retail, specifically the Internet, growth prospects look promising—although very messy. Changes in tax law and the rise of e-commerce giants such as Amazon and the newly public Alibaba have upped the complexity and competition for online dollars. Plus, consumers shop price—not brand—online, so the value proposition of one’s product must be unique to the channel. Tom Tolworthy, CEO of longtime dietary supplement brand Twinlab, says he’s not sure how all of these factors will shake out for the Internet channel, but “it isn’t going to be pretty.”

Meanwhile, natural retailers have begun a foray into Internet sales—Whole Foods Market, for example, recently announced a partnership with Instacart to provide one-hour delivery—but few are able to speculate on the outcome.

For now, the transformational energy in the supplement market is focused on personalized medicine—an opportunity as promising as it is inaccessible under the current regulatory environment. “This may be the time when we start to blend with pharmaceuticals,” Rorer says, “the same way that mom-and-pop blended with supermarkets to form supernaturals 15 years ago.”

The consumer market for personalized medicine, diagnostics and genomics continues to grow and open up opportunities for dietary supplements and nutrition to play a larger role in mainstream health care. Blood diagnostic services such as WellnessFX offer built-in supplement recommendations. This is a big change, seeing as the dietary supplement industry was built on an abstraction we call “prevention.” We can’t necessarily smell, taste or feel what supplements do in the body; we take it on faith that they’ll prevent our bodies from deteriorating into disease. However, in the new information age, it has become possible to measure prevention—to give it a shape and weight—without breaking the bank.

The main question is whether the current regulatory regime can support this changing market. As “personalized medicine” has infiltrated industry discourse, some companies have begun blurring the lines between supplements and medicine, although often to their own detriment. Barlean’s, for example, prototyped a take-home blood test meant to measure an individual’s omega-3 levels. But FDA deemed the product an unregistered medical device, prompting the company to pull it off the market. The industry has yet to figure out how to innovate within this new personalized medicine paradigm without breaking the law.

Furthering the blurring boundaries between supplements and pharma, pharmaceutical companies are increasingly interested in the supplement market, not only for its science-rich ingredients (consider omega-3s and Lovaza), but also for supplement manufacturers themselves. As revenues and margins shrink in the bloated pharma industry, the financial incentive to acquire mid-margin, high-growth nutraceutical players has piqued.

As personalized medicine gathers steam and the supplement and pharmaceutical industries continue to blend through mergers and acquisitions, it’s still unclear where retailers would fit into this new paradigm. On the regulatory front, is it most advantageous to leave the system as it stands under DSHEA and to sell iron alongside ashwagandha into perpetuity? Or is disruption necessary to bring a certain class of supplements closer to a model of prescriptions and premarket approval for the sake of better consumer adoption and proper usage?

Natural and specialty retailers remain the primary gatekeepers for consumer access to the supplement market, so their voices deserve to be heard on this issue. But where to direct them and to what end?