Organic Connections gets an insider&#39;s view on biotech companies, the risks of GMOs, and more.&nbsp; 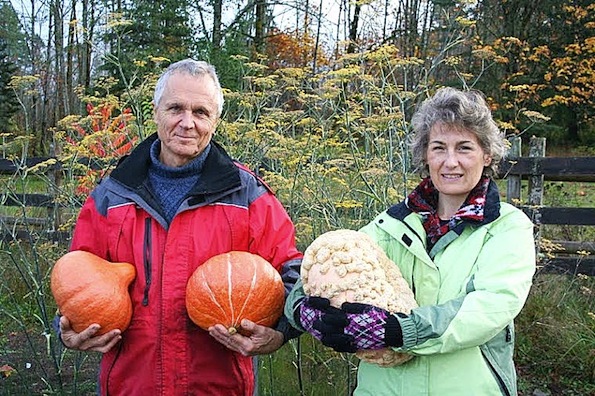 Guest post by Ken Roseboro, editor of The Organic & Non-GMO Report. He can be reached at ken@non-gmoreport.com.

The “conversion” of for­mer anti-GMO activist Mark Lynas to GMO promoter has gar­nered huge media atten­tion, but Thierry Vrain, Ph.D., a for­mer genetic engineer who speaks out against the risks of genetically engi­neered foods, has far more credibility—and a far more impor­tant story to tell the public.

Thierry Vrain’s career has spanned the full range of agriculture—from being a proponent of “chemical” agriculture and genetic engineering to being an advo­cate for organic farming and an oppo­nent of GMOs.

A native of France, Vrain earned an under­graduate degree in plant physiology from the Université de Caen and a doc­toral degree from North Carolina State University. After mov­ing to Canada he taught plant physiol­ogy at Université du Québec in Montréal. Then he worked for 30 years as a research scientist for the Canadian government in Québec and British Columbia where he con­ducted research on genetically modified potatoes, among other projects. He was director of the biotechnology department at the Pacific Agri-Food Research Centre in Summerland, BC.

After 35 years of research and teaching of soil and molecular biol­ogy, Vrain retired to a small farm in Courtenay, BC called Innisfree. Today, Thierry Vrain is a gardener, a teacher and a pas­sion­ate speaker about organic gardening—from soil health to GMOs.

Ken Roseboro: Tell me a lit­tle more about your background.

Thierry Vrain: I worked in three research insti­tutes in Montreal, Vancouver and Summerland. I was the head of a research group using mol­e­c­u­lar biol­ogy tools. We worked on food crops. I was genet­i­cally engi­neer­ing small fruit and pota­toes for nema­tode resis­tance using the snow­drop lectin gene.

The genet­i­cally engi­neered apple (now under regulatory review in the U.S. and Canada) orig­i­nated in our group though I wasn’t involved with the research.

KR: Did you speak pub­licly in favor of genetic engineering when you were at Agriculture Canada?

Vrain: Yes, I just took it on as my job. I explained the safety of the tech­nol­ogy to the pub­lic and did a good amount of lec­tur­ing, edu­cat­ing small groups.

KR: What led you to change from a sup­porter of genet­i­cally mod­i­fied foods to an opponent?

Vrain: I have some difficulties with how the controversy is han­dled. If you aren’t a sci­en­tist, you don’t understand the science. If you are a sci­en­tist and dis­cover things that are of con­cern, then you are accused of doing “pseudo­science” and often viciously attacked by the industry and academics on the pay­roll. This has hap­pened many times, for exam­ple to Arpad Pusztai in England and then Ignacio Chapela, who dis­cov­ered GMO con­t­a­m­i­na­tion in native corn in Mexico. He was attacked and almost fired from his post at the University of California. A year later his find­ings were confirmed.

There are now quite a num­ber of research publications, in peer reviewed jour­nals, showing concerns from feed­ing GM corn and soy to rats. Those stud­ies are ignored and shouldn’t be. Federal agen­cies should repeat the stud­ies and must test these crops for safety.

Research scientists from the US Food & Drug Administration made it clear in the early 1990s that there could be indirect effects from eat­ing GM crops, such as tox­ins, allergens, and nutritional deficiencies. Those warn­ings were ignored. Now a good num­ber of publications are confirming the predictions of the FDA scientists.

It trou­bles me that money and the bot­tom line are at the root of the use of the technology.

KR: You say that the science behind genetic engineering is based on a mis­un­der­stand­ing. Please elaborate on this.

Vrain: When we started with genetic engi­neer­ing in the 1980s, the sci­ence was based on the the­ory that one gene pro­duces one pro­tein. But we now know, since the human genome project, that a gene can cre­ate more than one pro­tein. The inser­tion of genes in the genome through genetic engi­neer­ing inter­rupts the cod­ing sequence of the DNA, creating truncated, rogue pro­teins, which can cause unin­tended effects. It’s an inva­sive technology.

Biotech companies ignore these rogue pro­teins; they say they are back­ground noise. But we should pay atten­tion to them. It must be ver­i­fied that they pro­duce no negative effects.

A key point is that the concern about genetic engi­neer­ing should be about the pro­teins. Many plants and animals are not edi­ble because their pro­teins are toxic or poisonous. To test for the safety of Bt crops, sci­en­tists have mostly fed the pure protein to rats, and there may be no problem. But it’s dif­fer­ent if you feed rats the whole GM plant because they are getting these rogue proteins that could cause harm.

How do you explain pub­lished papers describing how rats and mice suf­fer organ dam­age from eat­ing GM corn or soy? It’s too easy to dis­miss those as pseudo­science. Rats and mice are the canary in the mine, and we should be pay­ing atten­tion to what hap­pens to them.

Vrain: The human genome project is only 10 years old. How long did it take for peo­ple to rec­og­nize that the earth is not flat?

KR: And there are many sci­en­tists that pro­mote genetic engi­neer­ing of foods.

Vrain: There are a lot of peo­ple on the pay­roll and a lot of grant money flow­ing from biotech companies to academia. I used to be employed by Agriculture Canada. I did my job, and didn’t ques­tion things too much.

KR: What are some of the other risks you see with GMOs?

Vrain: When I hear we need genetic engi­neer­ing to feed the world, I cringe. It turns out that there is no increase in yield, no decrease use of pes­ti­cides, and the process is of highly questioned safety.

Even if genetic engi­neer­ing was per­fectly safe, I still ques­tion it because of genetic pol­lu­tion. Organic crops and foods are becom­ing contaminated.

I’m also con­cerned about contamination of the environment with antibi­otic resistant genes. Every GM crop has these genes. The preliminary evidence we have is that baceria in the soil and in the human gut are capable of pick­ing those genes up. Considering the alarm I hear from medical people about losing antibiotics, I think this should be a serious concern.

KR: What about the GMO apple that may be commercialized?

Vrain: There’s no research or toxicity tests to show that it’s not toxic. I ques­tion whether it’s use­ful. It’s not different from what other biotech com­pa­nies do, which is to put out a prod­uct and make money. Apple grow­ers, con­ven­tional and organic, are very con­cerned that peo­ple will reject their prod­ucts if a GM apple is introduced.

The apple is a sym­bol of health. An engi­neered apple does not have the same health appeal, and the indus­try knows that.

KR: What led you to favor organic agriculture?

Vrain: I used to be a soil biologist and focused on fertilizers and pesticides. When I retired I started to look around and, quite frankly, the organic side of soil biology made more sense than what I had taught.

When I was a soil biologist I would look at the biodiversity of the soil. I would see a big difference between industrial farms and organic farms, which had far more species of soil micro­fauna, microscopic “animals” and nematodes, what I call biodiversity.

KR: Tell me about the work you’re doing now with Innisfree Farm.

Vrain: It’s a small farm, a demonstration garden. My wife is an herbal­ist, and we grow medicinal plants. Young stu­dents come and learn about medicinal plants and organic growing.

It’s my retirement project. I say I’m atoning for my sins.